Does anyone know of power-estimation spreadsheet or tool, or have measured power data for the Atmel AVR32 UC3L Series when running heavily in a real application?

The datasheet itself is not very helpful, as it lists mostly minimum power numbers in few light configurations (e.g. spinning Fibonacci numbers, which is just adds and branches, with every possible MCU feature disabled) with statements like "These numbers are valid for the measured condition only and must not be extrapolated to other frequencies." [AVR32UC3L datasheet, table 7-5, page 44].

EDIT: I thought the question was quite clear, but to be specific: I'm interested in measured power data or a power estimation spreadsheet for this particular microcontroller, not microcontroller power theory in general.

No assertions from me :-) - I don't know enough about this cpu to assert anything. The following is based on experience, the datasheet and a good helping of guestimating.

Summary: Not enough data BUT

In your position I'd 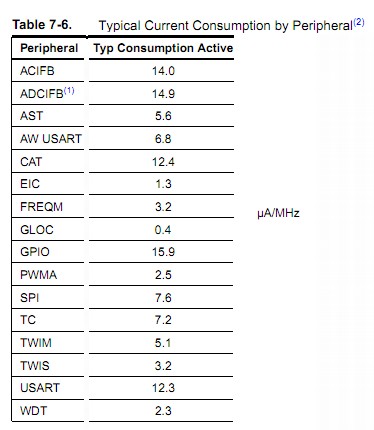 Interestingly, the total of peripheral currents below sum to about 100 uA/MHz so the core consumption predominates. This suggests

I'd not lightly dismiss Fibonacci numbers as a "light load".
A significant portion of the current drain for a CMOS processor comes from charging and discharging capacitive nodes, whether memory bits or port pins or registers or whatever. Anything that causes more bit changes is liable to require more power. I don't know why their division routines is lower powered, but something that "just adds" is potentially able to change as many bits as most things.

A microcontroller doesn't run "heavily". It's either running or not running. Some flavors have a additional standby mode, but that's not relevant to your question. Power consumption is going to be a function of clock rate, power voltage, and which peripherals are on.

The power consumption is not really a function of which instructions are being executed. At the same clock rate and power voltage, it will take pretty much the same power whether it's sitting in a NOP/JUMP loop or trying to calculate Pi to the zillionth decimal place.

On large systems with caches and a operating system that can put processes to sleep, power consumption can go up as the processor does more work. That's because the OS puts the processor in a idle mode or turns down its clock when there is nothing to do. When you give it a task it will have something to do and the OS won't put it in idle mode. However, microcontrollers don't work that way.

Not the answer you're looking for? Browse other questions tagged microcontroller power avr atmel or ask your own question.