Why does this transformer draw so much current?

I've been working on a DC power supply to provide about 10 mA at 200 V. The simplest way (not dealing with a switching power supply) seemed to be using a transformer to step 120Vac up a little bit to get peaks near the target voltage, then rectify and filter.

I've wound a custom transformer with a 18:19 ratio to do the step-up which behaves reasonably in simulation, but draws much more current than I expect when actually constructed: 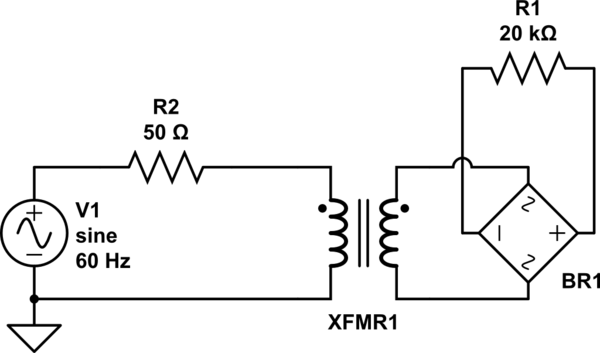 R2 is an NTC with \$R_{25\mathrm{C}}\$ of 50 Ohms to limit inrush current, and there's a fuse inline (not pictured). When connected the circuit draws upwards of 10A, but it takes a moment to warm up (quite literally; the NTC gets warm as you'd expect) before blowing the protection fuse, to the point where a 4A fuse took more than a second to blow (so current doesn't seem to be dropping after the first few AC cycles).

Since this is a custom transformer I don't have any solid numbers on its characteristics, so it's possible inrush current is much higher than the simulations say. Additionally, I may have underestimated the NTC so it warms up long before the transformer reaches saturation. (The third option being that I'm completely wrong and this is a bad idea.)

How can I limit the primary current to something in the the 1-2A range that I expect from simulation, or is there a smarter way to build this power supply?

When connected the circuit draws upwards of 10A

I'm not surprised. Consider the transformer primary as an inductor and forget about the secondary or any loading. The primary is still an inductor and you have to get the primary inductance high enough so that the current taken (with no secondary winding/load) is reasonably small.

Primary inductance (in fact it's called magnetization inductance) is proportional to turns squared so doubling the turns makes the inductance 4 times greater and, would reduce the intake of current by 4.

Eighteen turns is never going to be enough. A typical ferrite core (for example) might have an A\$_L\$ value of 10 micro henries per squared turn and this means 18 turns is going to be about 3 milli henries. At 60 Hz this has an impedance of just over an ohm and without a fuse you'd have a fire.

Usually AC transformers have round about 1000 turns on the primary and this of course means a primary inductance of 10 henries and a very much reduced magnetization current. Try looking at this site for some information on transformers.

Also note that transformers do not pass DC because the primary inductance becomes a short i.e. the lower the operating frequency you use the more turns you need to avoid excessive primary (only) current.

If you are still intent on rolling your own, here's the math: -

Also take a look at this medium power transformer: - 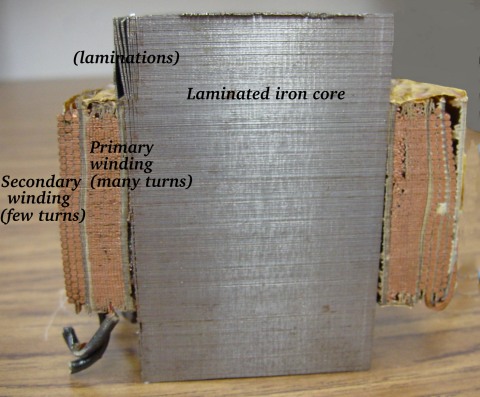 Note the number of primary turns. A quick estimation I did tells me there are about 12 layers of about 90 turns each. That's 1080 turns!

I suggest that instead of trying to wind your own transformer primary and secondary that you find a suitable surplus transformer that has already a 120VAC primary. Take the transformer apart and remove the outer coil wrappings and wire layers for the secondary. Count the turns in this secondary as you remove it so you can relate that what the original secondary AC voltage was. Note for example if the transformer had a 20VAC secondary any you removed 100 turns of secondary winding then you know it is 5 turns per volt.

When you take things apart try not to disturb the inner primary winding or the wire connections to it. Also leave the primary to secondary insulation layers in place.

You are now ready to re-wind a new secondary onto the coil. Since you only need 10mA of output current I suggest that you use a wire gauge smaller than 24AWG so that there will be room to put on the required number of turns. If you wanted to get out say 150 VAC and as per the example above your secondary would need 750 turns. When working at higher voltage secondaries it can be a good idea to insulate between successive layers of the secondary winding if it takes more than one layer for the required number of turns. Turns that are side by side in a layer are less than a volt apart so there is very little chance of breakdown through enamel. On the other hand from layer to layer the voltage gets much higher and the possibility for breakdown increases. You also want to take that extra insulation into account when you terminate the beginning and ending of the windings to wires.

This approach has the significant advantage in that you start out with a transformer that has the properly designed primary wire size, turns, DC resistance and inductance suitable for the core.

Not the answer you're looking for? Browse other questions tagged current transformer mains or ask your own question.