To keep this short and sweet, I wanted to make a circuit/controller to decrease the inrush current on a large powerful fan for my race car. I ideally just wanted something that wouldn't let the amps peak when the fans turns on from a dead stop, and then settle at their steady state current. The fan is large, and is reported to have spikes as high as 80 amps before settling to its steady current of about 30 amps. The fan also has two speeds, by powering one of two coils that share a common ground. (3 wire fan motor).

A very experienced and talented EE on my car forum pointed me to using a simple step-start circuit, to limit the begining current to allow the fans to get up to a decent operating speed, then a few seconds later allow full current for full fan speed. We worked back and forth and came up with the following circuit: 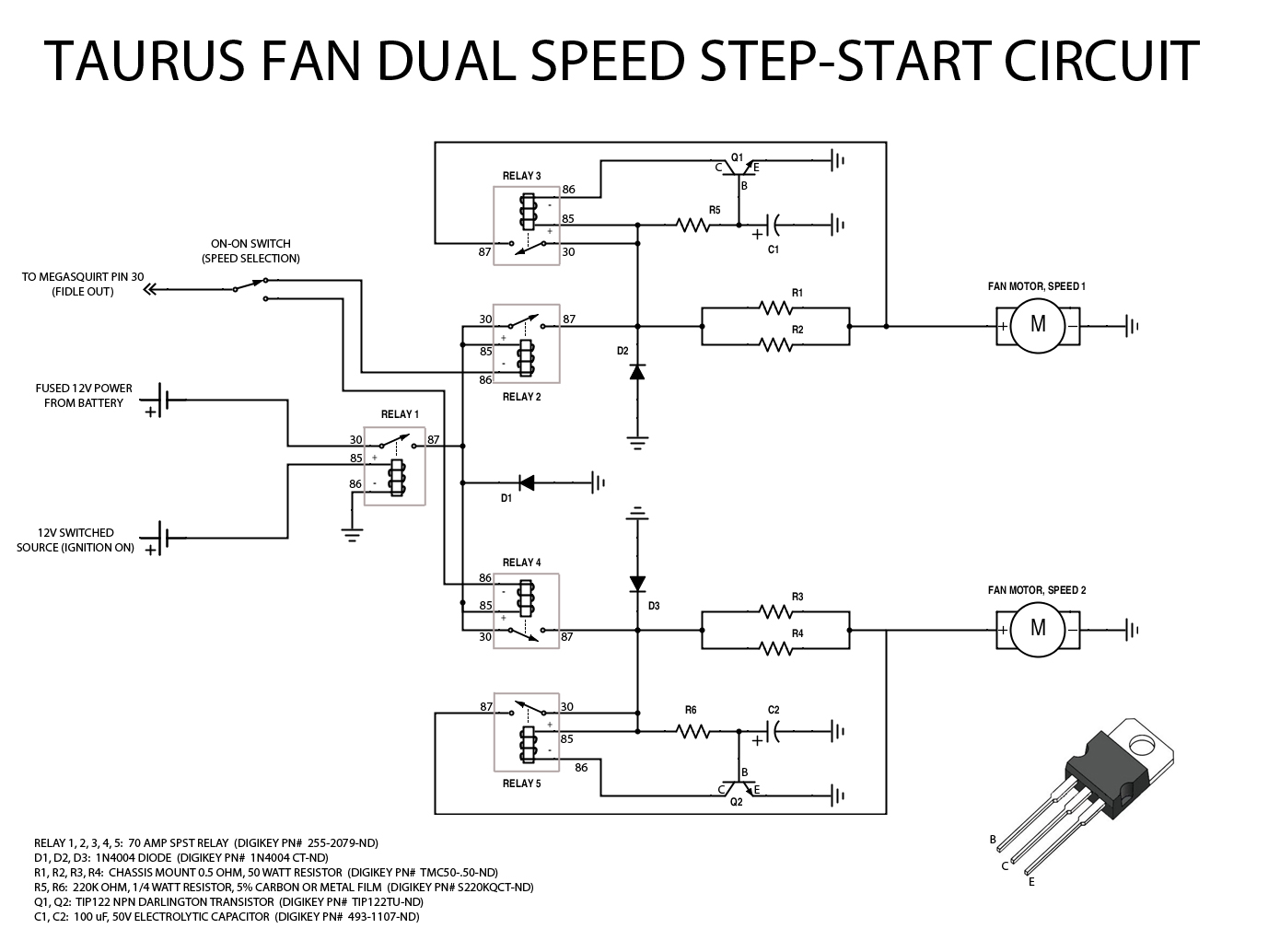 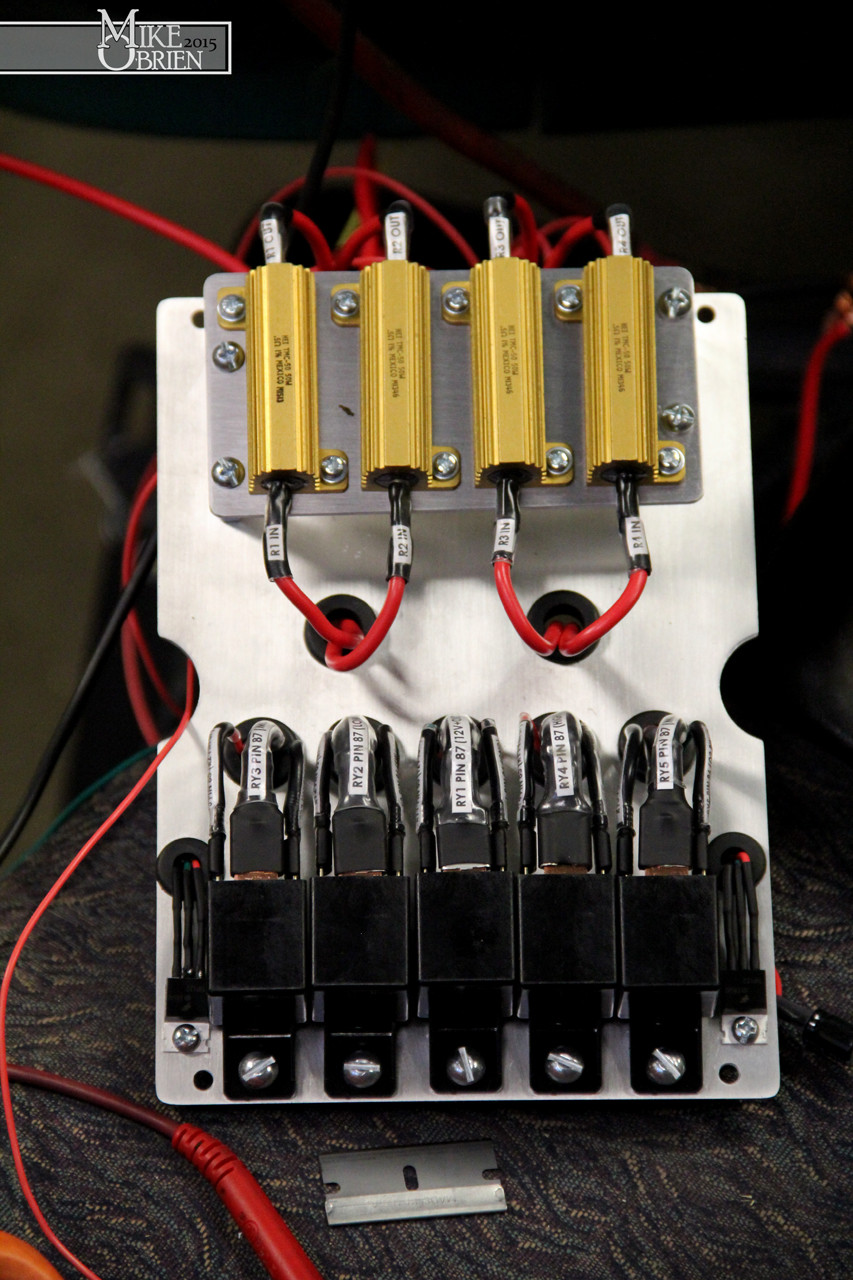 Note there are two different discrete circuits for each fan speed. The main relay is powered by a 12V switched source so the fans only work when the car's ignition is on, and Relay 2 (low speed) or Relay 4 (High Speed) is activated by teh car's ECU grounding pin 86 on either relay. A simple on-on switch is used to select which relay the ECU grounds and activates, selecting the speed.

I just finished it tonight, and after testing have a few problems. The big power resistors do a perfect job of limiting the fan'starting current, but relay 3/5 never kick on after a few seconds as planned to short out the power resistors and provide full current.

Does anything stand out in the diagram above? I have triple checked my wiring, and everything seems correct. The polarity and pin assignments of all the components also seem correct. NOTE: I AM NOT AN ELECTRICAL ENGINEER. I am a mechanical engineer, who is very handy with 12V auto electronics, but this is one of my first explorations with a small circuit. Even though I am sure this circuit is trivial to alot of you, I do not know the specifics of how this transistor operates or should properly operate for the system to behave like I want.

From my initial observations (lets just focus on the low speed circuit at the top of the diagram), the voltage at the base of the transistor when I energize the circuit builds voltage from 0V to .465V over about 2 seconds or so. The collector of the transistor seems to always have 8.8-9V across it from the instant the circuit is energized, and stays at that voltage until I remove power from the circuit.

From here I am not exactly sure where to go. Could it be just a simple issue of the wrong resistor at R5 or capacitor C1 is providing too small a current to switch the transistor? Should there be that 8.8-9V at the collector of the transistor at all times, or is that an issue? The relay (#3) may not have the needed voltage to activate with only 8.8-9 volts?

The circuit cannot work-220K is too high for that transistor due to internal resistors. D2,3 do no good- they should be across coils of K3,5 (reverse biased, or you'll fry the transistors).

You could try replacing the transistors with power n-channel MOSFETs or greatly reduce the resistors and increase the capacitors proportionally to compensate. Something more like 47K and 470uF, 10V rating is okay for the caps but get 105C types. (Note: This was assuming the original circuit was calculated correctly, but I don't think so).

Not an EE myself, I would try some BAC's. "Big Ass Capacitors". That would give you the "boost" you need when starting the fans. A lot of peeps use them with sound systems when needing instant power.

In addition, there are no indications of how the coils on these relays are wired.

Never mind I got it, had to follow the wires! DUH

Here's another thought, high speed wired straight to 12vdc, low speed through a resistor that drops half your voltage, all on a three way switch?

Not the answer you're looking for? Browse other questions tagged transistors automotive remote-control 12v or ask your own question.