How to choose transistor for switching bigger MOSFET

Leading on from my last question: MOSFET choice for 12v LED Strip and 3.3v Logic I have decided to use the IRFZ44N (despite it not being ideal for the job) for being economical the cheapest option and now need a second transistor that allows me to switch the MOSFET. The idea is the following: Since the project already has a 12v lane in place for the RGB LED strips, I want to use another transistor in front of the MOSFET to raise the gate voltage to 12v allowing the IRFZ44N to be used for my project.

I know that I'm looking for a small transistor (nothing beefy) since all it will do is switch a MOSFET gate at 12v which is not current-intensive as far as I understand it. I want it to be fast-switching so that it does not interfere with PWM. Looking through a local supplier I found that I could get a BS170 for 10 cents. I wonder if this is a suitable transistor for switching a IRFZ44N at 12v Collector Voltage. The full plan repeated once again:

are any other components needed for this? Is the transistor a good fit? It seems to me that mostly any transistor would work as long as it is definitely conductive at 3.3v and can handle 12 Volts.

What I'm really unsure about is the amperage - how do I calculate how much current switching a MOSFET will draw? The BS170 cannot handle > 0.1A according to the datasheet (section 'transfer characteristics' for the Fairchild BS170.

Thank you for reading this - probably all too simple - question.

A single transistor will not provide an interface with your FET AND do it without inversion. You can do the job with two transistors, though. 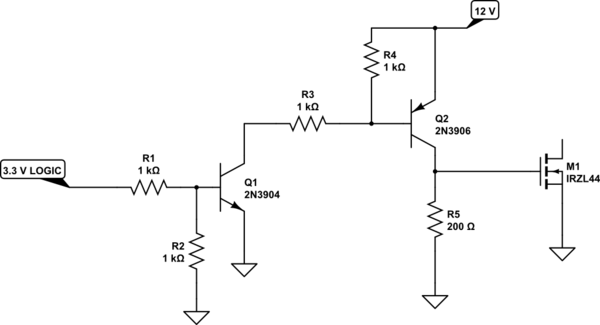 This will provide a decent drive for your FET with about a 1 usec added to on-time. That is, if you put in a 10 usec pulse, the FET will be on for about 11 usec.

Also note that R5 needs to be a 1-watt resistor.

It turns out I was using the wrong FET model, and my value for gate capacitance was too low. For a "real" IRFZ44, the added pulse width is about 3 usec, not 1. The problem is that, when you go to turn off the FET, The charge stored in the gate can only discharge through R5, and the time constant is in the 3 usec range. You can, of course, decrease R5, but then the power it dissipates when the load is driven on goes up. You can get a 2 usec delay rather than 3 by decreasing R5 to 100 ohms, but then you need a 2-watt resistor. If you need very narrow PWM cycles (low effective motor current) you're probably better off with a more sophisticated driver. I personally tend to go with the Maxim MAX4426/4427 (less than $4 each, with 2 channels per IC), but that's just habit.

I am actually working on a project with an RGB LED strip that requires 12V. I am using a 2N2222A (NPN BJT). A MOSFET will not draw current at the GATE, but a BJT will draw a small current through it's base. They are super cheap and super simple. I took this off the internet, but it is a similar setup: 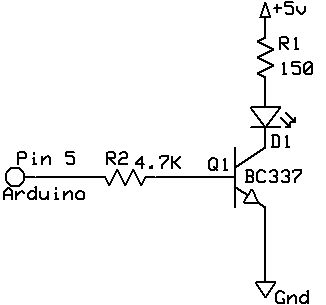 Since LED's are current driven, this is a good example of "Turning" on and off the current. If the voltage at the base (Which is called gate for MOSFET's) is high, then current will flow. If the voltage is low at the base then no current will flow, the BJT will act like an open circuit. Keep in mind that you may still have 12V sitting on your LED, but because the BJT is open it will NOT allow current to flow, thus not illuminating the LED.

Also keep in mind, that since you are using an RGB LED you will need 3 BJT's for each LED strip. Good thing 2N2222A's are fairly cheap!

Hope this helps. Please let me know if you have any questions. I am going through a similar project at the moment so I might have some answers or advice as to why I made certain design decisions. Good luck!

This won't work as you want. For a start the BS170 is an N channel mosfet and does not have a collector or emitter. Secondly you are attempting to describe it being wired as a source follower - this will not amplify the gate drive voltage at all. In fact it's likely you'll get a smaller gate drive voltage onto the IRFZ44.

What you could do is have the BS170 wired with source to 0V and drain to the gate of the IRFZ44 - you will also need a pull-up resistor from drain to 12V. The action will be inverted i.e. when you formally produced a 3V3 gpio output, this will now turn off the IRFZ44.

If you can't live with the inversion then a PNP transistor can be made to work but the base drive to it is a little more complex. Given the speed you need to drive PWM I'd use a proper driver like this: - 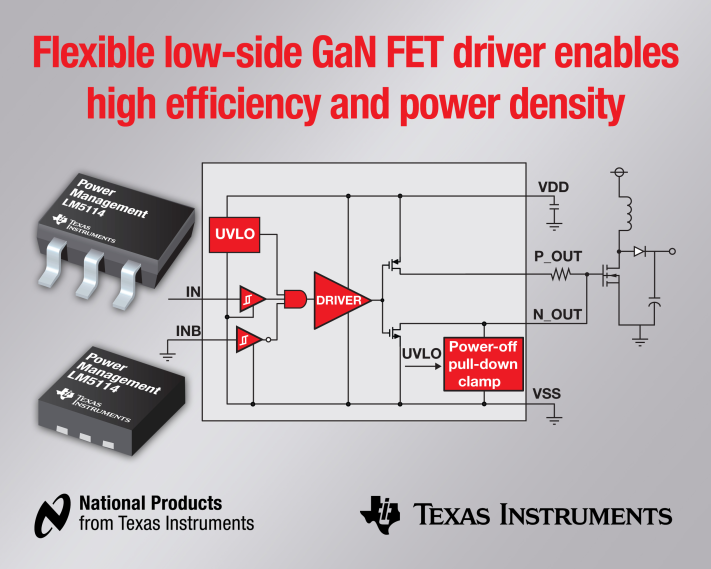 Not the answer you're looking for? Browse other questions tagged transistors mosfet switching or ask your own question.

15
What to look for in the datasheet when choosing a MOSFET?
3
Choosing the right transistor for a switch
0
MOSFET Switching without gate voltage / LED Strip
2
High-side switching 12V with BJT/MOSFET
0
Why MOSFET transistor doesen't do the switching?
4
Transistor Push Pull Stage to drive Mosfet
0
How to best choose a method of driving a MOSFET
2
Drive IRFZ44N Mosfet with 2N2222 NPN Transistor from ESP8266
0
Confusion with how to ground base of transistor