Board layout help: 64-output Mux! (for possible use in 8x8x8 LED Cube)

So just for practice I decided to design a 64-output mux in Eagle, I figured if its good it could be useful in the future. I did not use auto-router.

Here is the PCB: 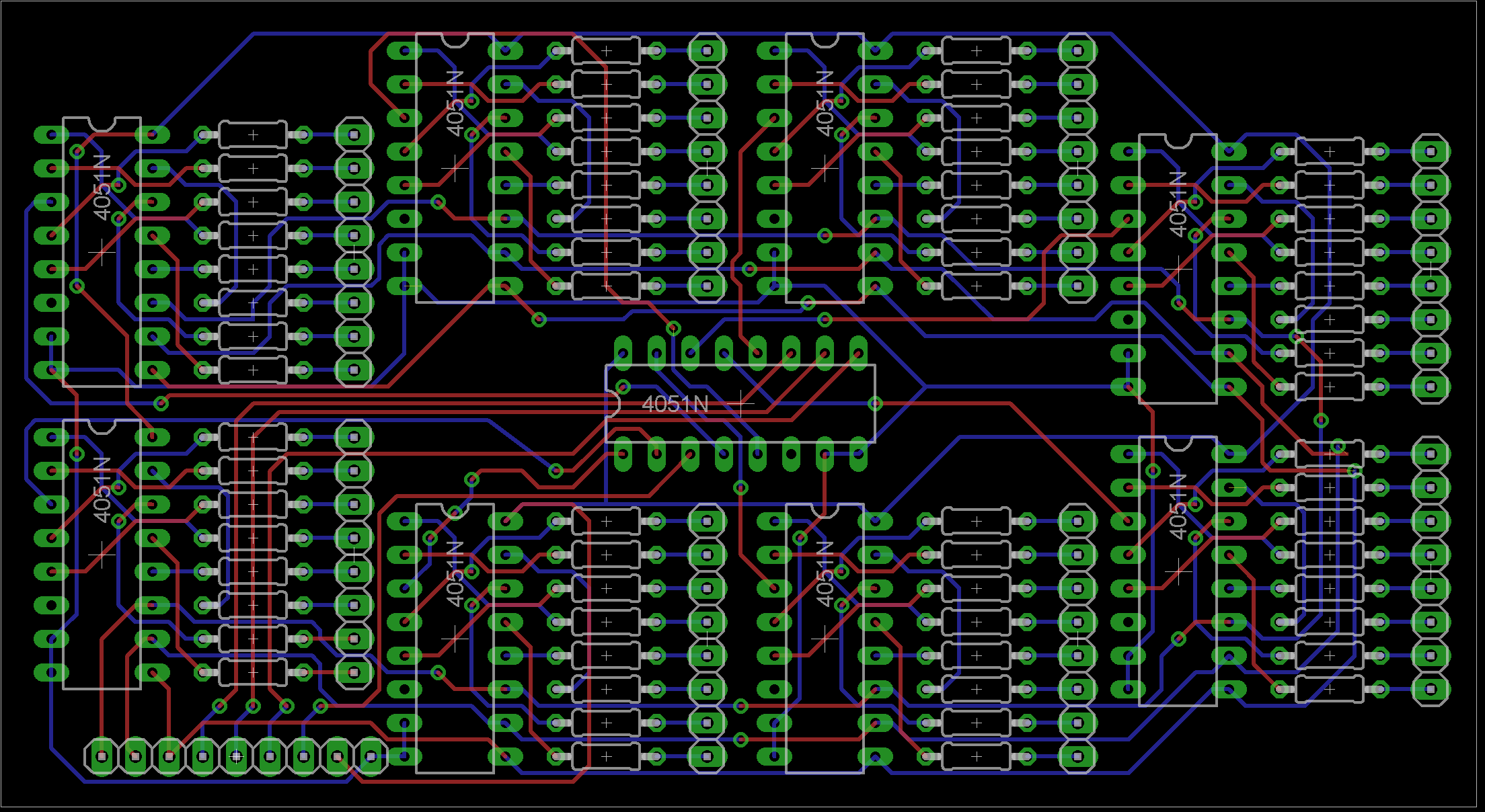 To the lower left are the interface pins: power, gnd, selectors.
It consists of 2 levels of 8-output muxes (9 total).
Datasheet for analog muxes used (CD4051): http://www.datasheetcatalog.org/datasheets/120/109150_DS.pdf

Here is the schematic it's based on:

The size of the layout is 4.4" x 2.4" which would get really expensive to get printed for an amateur. I kind of get the feeling this whole idea is impractical, but I don't know what to think. Does it even make sense to do this?

Is this a good design?
I'm planning on using this to make an 8x8x8 LED Cube. Would this design cause too much propagation delay since the traces weave in out through vias a lot?
Is there any way I can make this even more compact or efficient? Or just any general improvement?

Any input is appreciated! Thanks!

No, it's not a good idea. First you're using analog multiplexers which have a rather high \$R_{ON}\$, like 125\$\Omega\$. You're passing two levels of them, so that will be 250\$\Omega\$. Nothing to worry about, you could say, I'll need a series resistor for the LED anyway. Right, but you'll also have to drive a high current through it. You're multiplexing 64 LEDs one by one, so that's a 1.6% duty cycle. You'll have to pulse them with high currents to get some light out of them, possibly even high enough to seriously shorten the LED's life.

A better solution would be a matrix. The columns could be driven by a ULN2803, which can sink high currents. You could switch columns on one at a time, and for the rows set the row outputs high for the LEDs you want to light in the current column. So a row will only drive 1 LED at a time, a column 8 LEDs at a time. Your duty cycle has increased to 12.5%, so you won't need that excessively high peak current anymore. Yet it will still be more than your microcontroller can deliver, so you'll need a PNP transistor for each row.

Since you'll be driving only 1 column at a time you can use a demultiplexer like a 74HC238, so you'll need only 3 lines for that. Together with 8 row lines that's a total of 11. That would be OK for 64 LEDs, but you'll need 8 of them for the 8x8x8 cube, and that would be costly in microcontroller output.
Solution: use SIPO (Serial In-Parallel Out) shift registers like the 74HC595 for the row data. Cascade them for the 8 matrices, so that you can shift 64 values through them. When the last bit has been shifted in you latch the data and select the column. While the LEDs for this column are on you can already shift in the data for the next column. At the time cue latch the data, and again select the next column.
Alternatively place the 74HC595s in parallel and shift 8 bits simultaneously in them. This will need 8 bits of your microcontroller's I/O instead of just 1, but you won't need 64 shift operations, only 8.

(A) This looks like a good time to make the jump to surface mount. Try it, you'll like it !!!.

35 LEDs driven from a single package, driven by a single output pin.

If you want to spoil all the fun and get a compact solution that works (but may not challenge your board layout skills so much, consider solutions such as:

Some IC's with clock / latch / data / reset control lines often seem to have been obligingly arranged so that the polarity of the control signals allows time delays and a single input line to control the IC. Worst case with less obliging IC's a few inverters may be needed.

Clocking on an MM5450 occurs on the rising edge. Data is fed from the input line via an RC delay, with t delay several times greater than the achievable clocking rate. If the input line is held high for Td data goes high. If input is now lowered and raised a high is clocked in. If, instead, the clock line is lowered as soon as possible after the last clock edge and held low for Td and then raised a low is clocked in. A reset or frame load or whatever signal can be achieved by a longer delay of say Treset. Holding the input at the reset level (whether high or low) for > Treset will activate the reset or frame load or whatever function. Reset delay can be restarted by using a diode across the charging resistor so that reseting action is reinitiated every time an o[[osite condition appears on the input line. If copious processor pins are available and the distance to the display IC is small then using multiple drive lines may be preferred. However the above scheme can be used to operate a display IC via a single pair at a distance. For extra points the same pair can be used for power supply. Powering and full control of 35 LEDs on one pair is a good trick if you can do it. With an MM5450 you can. Long ago this was an attractive solution in some cases. Now, in the age of 50 cent (or less) microcontrollers, placing a controller at the "far end" may be preferred.

LEDS get approximately linearly brighter with increasing current. A current of 15 mA per segment is quoted (which is a minimum value, max being 25 mA+). Many modern LEDs are specified at 20 MA max continuous. A ratio of 3:4 (= 15mA : 20 mA) is virtually indiscernible to the eye, and the efficiency of the LEDs is a far larger factor than small changes in current.

At say 10 mA there are many modern red LEDs that would be as bright as you'd want - and far brighter than LEDs from previous generations. Look at what people like Nichia & Cree are offering at the top end and you'll be duly impressed.

Aside from the issue that this is not the way to drive LEDs, when designing a PCB for large channel counts, you need to use a bottom-up approach, starting from the layout, not a schematic with nice, logical or arbitary pin assignmants. Channel mapping can be done easily in software, so lay out the PCB in whatever way makes the tracking neatest and easiest, then back-annotate to the schematic and use a lookup table to map it.

This 5x5x5 LED cube for an XMOS device uses two STP16CPS05 chips and five BD140 BJTs. It's driven by SPI. Here is my version of the schematic, I was thinking of designing a PCB for it. It could easily be extended to an 8x8x8 cube.

This XMOS XK-1 board that he used costs $59, including the XTAG-2 interface required for programming and debugging. I've got two of them.

If you use a shift register whose high-side and low-side drive currents are both sufficient to drive an LED at 1/4 duty cycle, my suggestion would be to wire each 8-light string using four wires. Two wires should be wired to dedicated shift-register outputs (using current-limiting resistors if needed), and the other two wires should be in common for all 8-light strings, with very strong independently-controlled high- and low-side drivers. Such an approach would minimize the number of wires needed for each vertical light string (four vertical wires could drive up to twelve lights, but the circuitry for that would be more complex).

Even using 8-output shifter chips, one would only need 16 chips to drive the whole cube (plus a few discrete outputs to control the large high- and low-side drivers).

Not the answer you're looking for? Browse other questions tagged layout eagle multiplexer or ask your own question.

25
PCB layout questions for MCU breakout board
12
How to easily find or create parts for Eagle schematic/board layout
0
I'm getting a noisey/square wave output for my mux/demux?
0
Board layout for a blinker circuit
0
Multiplexing PT100 with CD4051
2
Is there any PCB design software/extension that can do automatic components placement?
0
summing 2 numbers with n^2 digits using Full Adders and 2x1 Mux with t_pd=O(n)
0
USB data mux - bi-directional?