Originally the function generator was used to directly drive the MOSFETs, but the turn-off time was quite slow (RC curve with the function generator). Next, a nice totem-pole BJT driver was built which worked ok, but still had some issues with fall times (the rise time was great). So, we decided to buy a bunch of MCP1402 gate drivers.

Here is the schematic (C1 is the decoupling cap for the MCP1402 and is physically located close to the MCP1402):

The purpose of the transistors at the beginning is to prevent the negative voltages coming out of our function generator (it's hard to configure and easy to screw up) from reaching the MCP1402. Our fall times being sent into the MCP1402 are quite long (1-2uS) due to this crude arrangement, but there seems to be an internal hysteresis or something preventing this from causing problems. If there isn't and I'm actually destroying the driver, let me know. The datasheet doesn't have any input rise/fall time parameters.

Here is the physical layout: 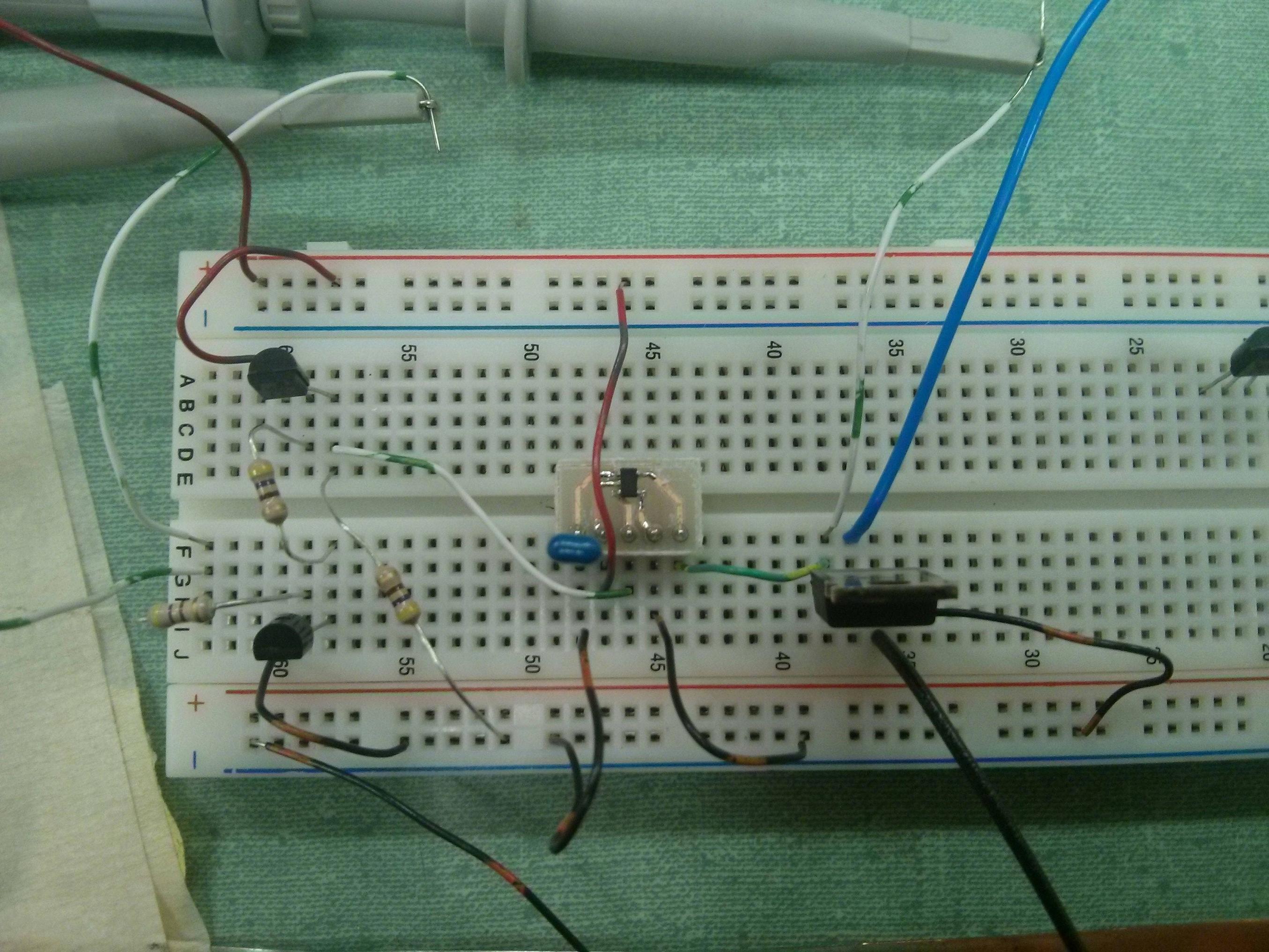 The problem that has just been plaguing this design has been a combination of ringing on the gate line and slow switch times. We've destroyed more MOSFETs and totem pole BJTs than I care to remember.

The MCP1402 seemed to have fixed some of the issues: no ringing, fast fall times; it looked perfect. Here is the gate line without the ignition coil attached (measured on the bottom of the gate pin of the MOSFET, where the green&white wire is plugged in above): 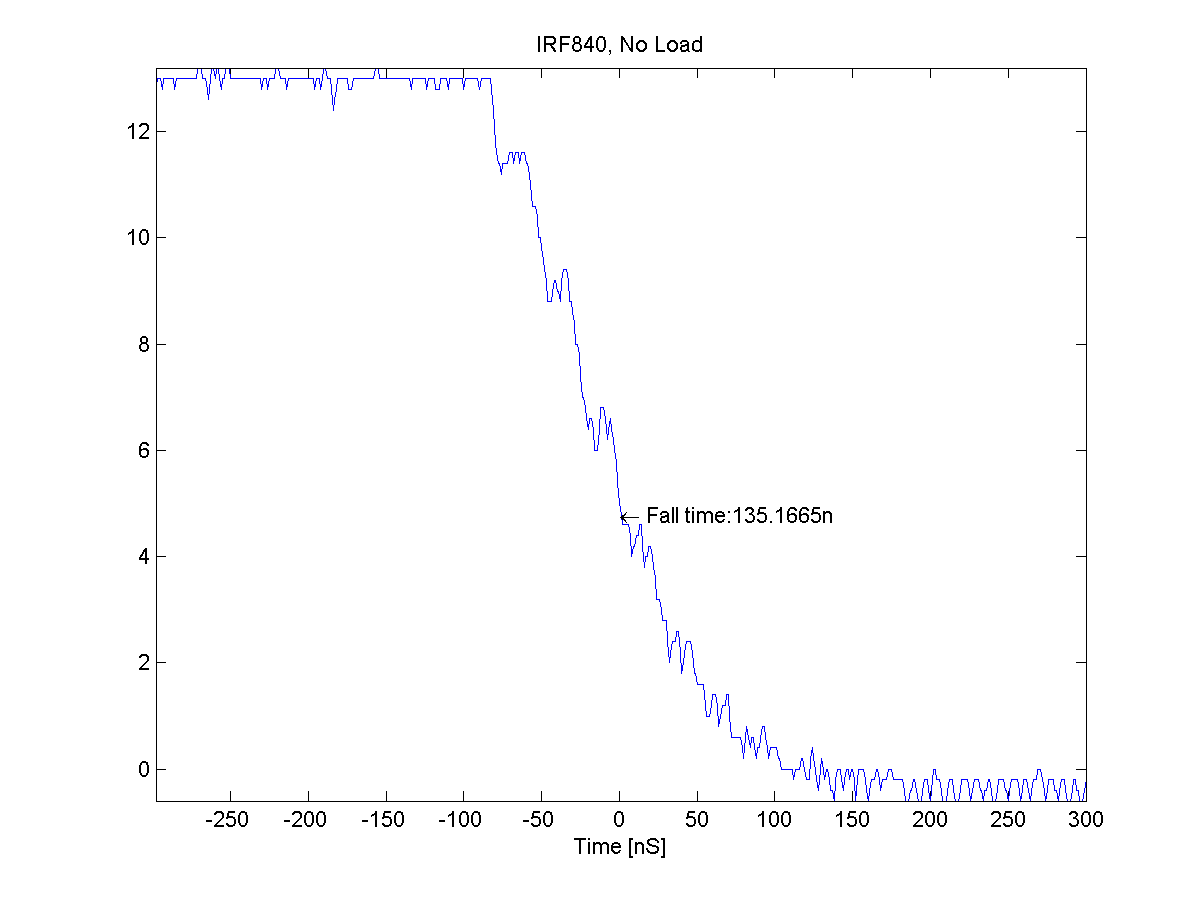 I thought that looked great and so I plugged in the ignition coil. That spat out this garbage: 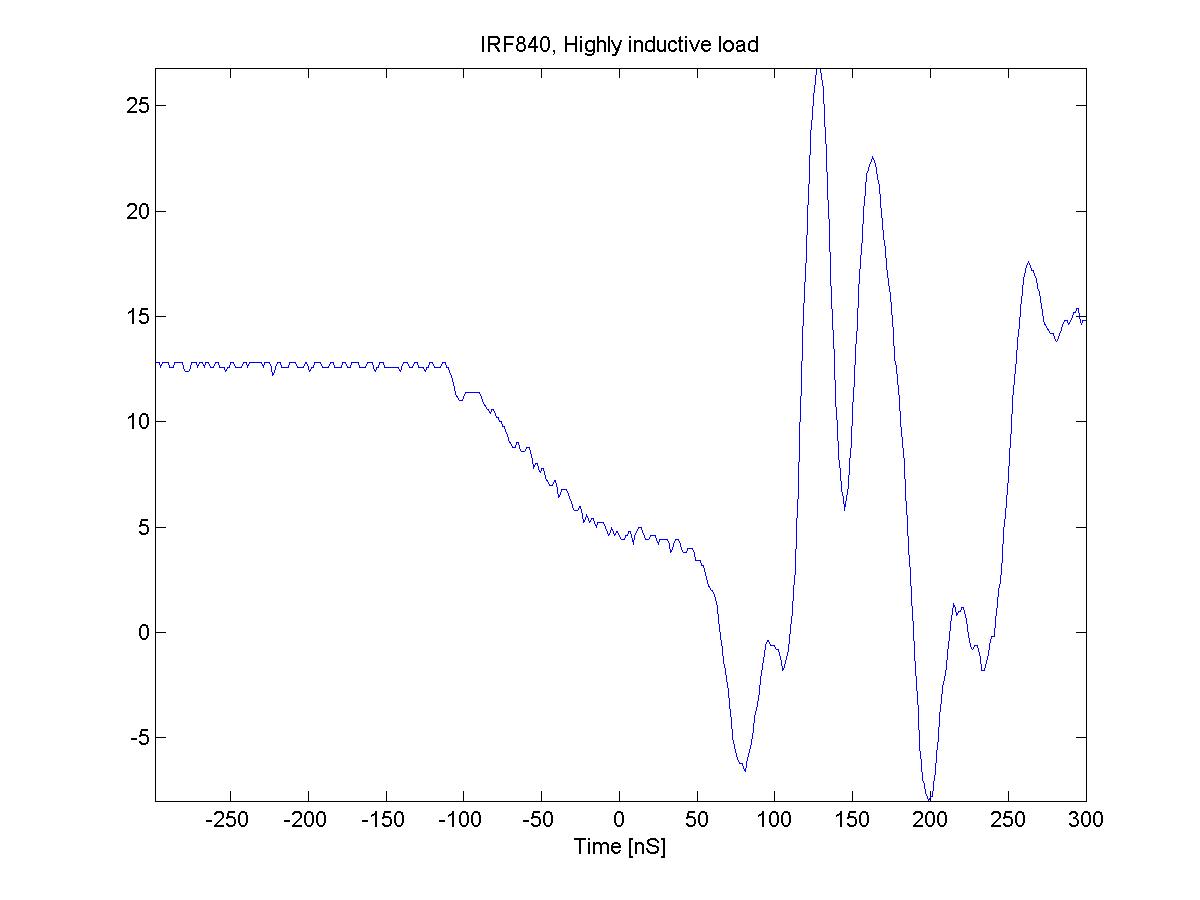 This isn't the first time I've seen this junk on my gate line, but it is the first time I got a nice picture of it. Those voltage transients are exceeding the maximum Vgs of the IRF840.

After capturing the above waveform, I quickly shut everything down. The ignition coil didn't produce any sparks, telling me that the MOSFET was having a hard time turning off in a timely fashion. My thought is that the gate was self-triggering from the ringing and cutting off our di/dt spike.

For reference, the inductance of the ignition coil has been measured at 9.8mH. The series resistance is about \$2\Omega\$ at DC.

So, I can't use a protection diode it seems.

Holy Carp! You're trying to do 10's of nsec switching on a solderless breadboard? And you don't have a flyback diode on your transformer?

If you're going to do this stuff, you've got to learn to respect fast switching and inductive parasitics. Go to a ground plane and make all your switching paths as short as possible. Also, put a 100 uF cap (tantalum for choice) across your MCP1402 to give the flyback diode something to drive besides the long leads to the battery.

You see those regular bumps on your no-load waveform? They are ~40 MHz oscillations and they are not a good sign.

A combination of the IRF840's reverse transfer capacitance (120pF), the dv/dt of the drain voltage and the rather weak driver (MCP1402) is my best guess.

Starters, read the data sheet on the driver - it says on page 3 that the "latch-up protection withstand reverse current" is typically greater than 0.5 amps - that is a clue to why that device might be failing.

I'm thinking that the current through the 120pF with a big change in dv/dt on the drain is more than the driver can cope with. Just before the scope picture goes all bad I see something like 10V change in about 20ns therefore:

I = 120pF x 10V / 20ns - that is 60mA but that's just the voltage seen on the gate - it might by ten or a hundred times bigger on the drain and therefore the current might be 600mA to 6A forcing its way thru the reverse parasitic capacitor into the driver chip.

This is my suspicion anyway. I'd use a driver capable of ten amps or at least find one that can cope with a reverse current of ten amps.

Andy's on to something, I believe, with the drain-gate capacitance.

But also: Measure what this is doing to the 12V supply. That would be an alternative path for spikes through the gate driver. Currently you're showing a single 0.1uF capacitor as decoupling, and I suspect that isn't enough. You may need a broad spectrum of decoupling from 10nF up to 100 uF or more, and if that isn't enough, consider powering the gate driver and sensitive electronics from an L-C filter and their own local decoupling.

This is made in all CRT TV's and monitors horizontal output stage.

Your Gate driver is being destroyed because of voltage spikes when MOSFET turns off..
Check this out: Snubbers

In case others come across your question.

Using inductive kickback for high voltage generation is a bad idea even in cars: those things are bad RF noise sources. There's a reason why modern cars use individual coil packs for each spark plug, and why those are often buried in the aluminum head covers: it's the smallest possible current loop, has inherent shielding, and can be quite RF-quiet.

If you want to generate 200kV, standard ignition coils and inductive kickback and fast edges are only worth contemplating if everything including the load is in a Faraday cage or a metal shield. It will never ever pass any EMC testing otherwise, and its prolonged use is illegal.

You want to use a custom-wound transformer designed for 50kHz or thereabouts, oil-insulated. It'll be quiet as long as you don't produce sparks with it. Once you get it arcing randomly, you're back to a broadband RF interference source.

12
What caused this IGBT failure?