To implement a simple AC mains input circuit to charge a capacitor with low voltage DC I think that it should be possible to connect the output capacitor to the AC line through a diode, and a transistor which will disconnect the capacitor from AC line after the input AC sine will go higher than some certain voltage (Uthr on the picture). So the power will be consumed from the input AC line only within narrow periods of time when the AC voltage is higher than the current capacitor voltage and lower than some certain limitation (let's say 30 Volts): 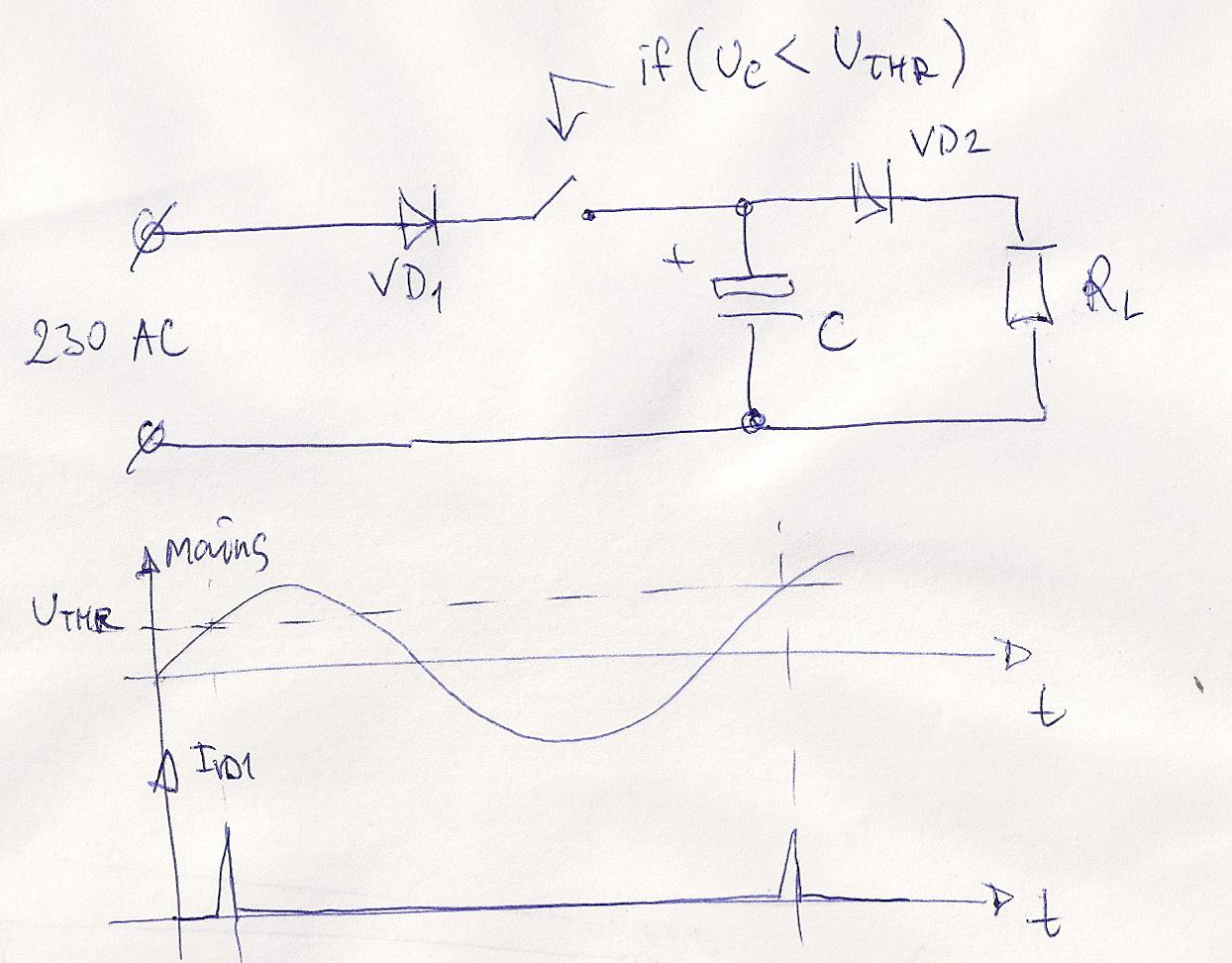 After this "rectifier" an LM7805 or similar IC can be used to stabilize the output voltage.

I suspect that this schematic can be useful in application not demanding for power, efficiency, input to output isolation and power correction factor. However it could be extremely cheap and simple.

If this was already been realized, how can I search for related products (switch driver schematic, special purpose ICs, switches...)?

I have to say sorry to many of downvoters for my poor English. This was a struggle for me to put my idea into English words.

The concept you describe is implemented both by some commercial IC's and by discrete circuits such as the one below, designed by the great Dave Johnson.

After mains AC zero crossing positive going rising mains voltage couples to the gate of the MOSFET turning it on. The MOSFET connects the "ground" of the output circuit to the -ve of the input bridge rectifier BR1. The 470 uF charges to the so-far-still-low mains voltage.
The 220k:10k divider drives the 2N222 transistor base. When the mains voltages rises high enough to to turj on the transistor, the transistor clamps the MOSFET gate to its source, turning it off. This state continues until Vmains again falls below the critical level.

When the MOSFET is OFF the output circuit floats to rectified mains phase voltage above AC "neutral". Touch it and you may die.

Even if the circuit was rearranged so that output earth was at neutral when Vmains was high the circuit would still be a potential death trap. 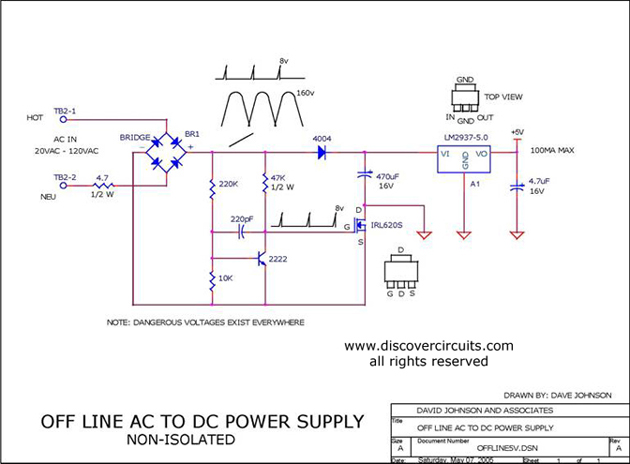 Here is a very slightly altered version - same circuit - load wiring shown slightly differently to make it clearer that the whole output circuit is effectively alternately connected to Neutral and then to phase. 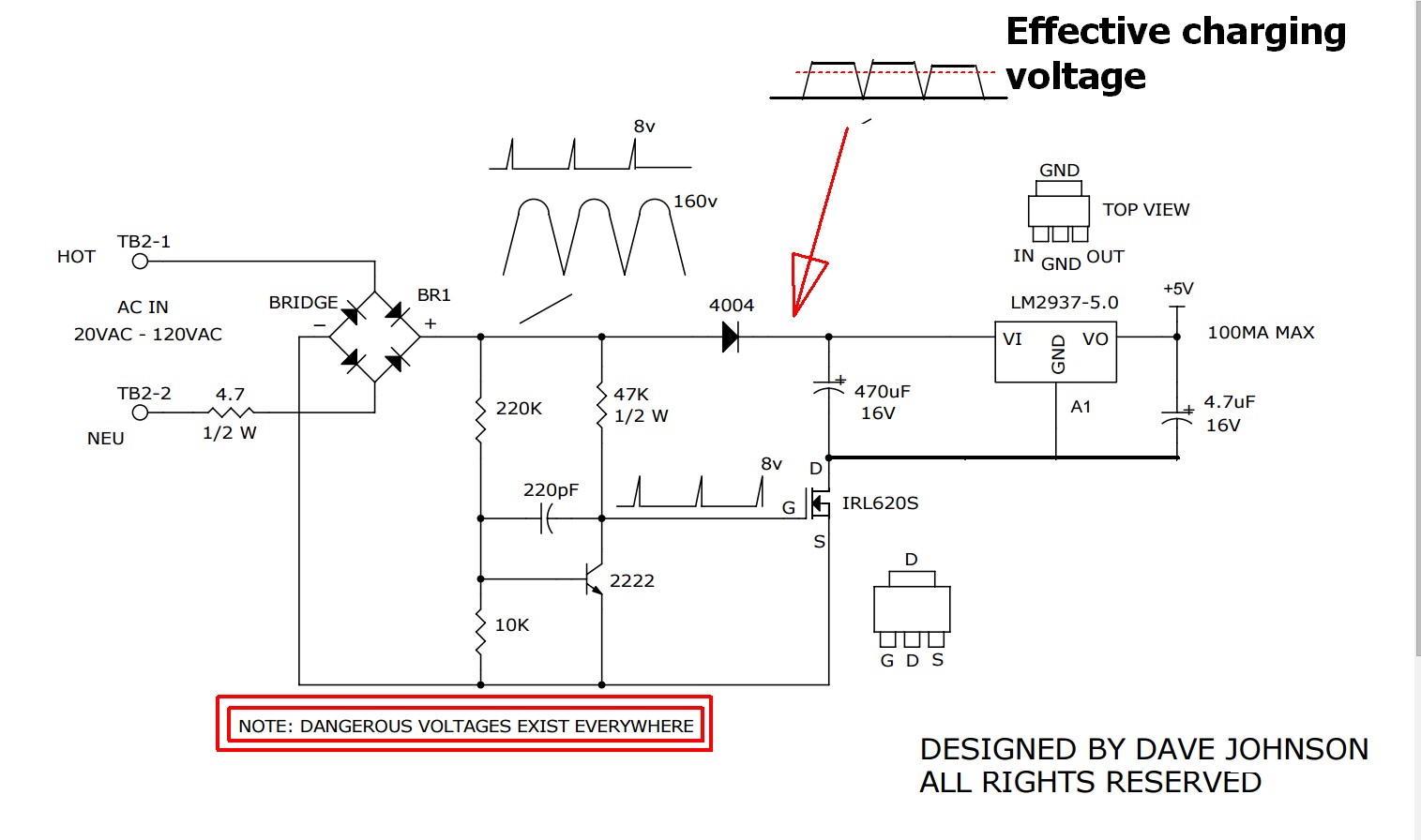 Above is based on PDF here

Note very carefully that ALL parts or this circuit MUST be treated as if they were at mains voltage - as they may be. This is a very dangerous circuit and must only be used with a full understanding of and allowance for the dangers.

Circuits like this are prone to occasional sudden noisy & explosive failure with release of magic smoke. Mains spikes or dips or surges can "fool" the switching logic in various ways. While the concept is good the risk is so high that use of safer isolated supplies is almost always preferred. Even if the user is not endangered the circuit is liable to destroy the powered equipment "just because it can".

Not the answer you're looking for? Browse other questions tagged ac-dc or ask your own question.

1
How to efficiently charge a capacitor from AC source

8
AC adapter: Input power vs Output power
1
Bias-tee for adding multiple frequencies to a DC line
0
This circuit uses a transformer on a rectified DC voltage, what purpose does this serve?
1
Relay-controlled Fan Transient Question
3
What is a simple yet efficient way of converting 12VAC to 5-12VDC?
0
Can I get a 150V DC output LM317HV-MIL
1
AC “chopping” power supply inrush current problem
0
Discrete linear voltage regulator