I know that Ohm's Law is V = IR but I am getting some very confusing current readings from multiple multimeters. Here is my very basic breadboard configuration:
V = 6v
R = 200 Ohms
I = Should equal 30 mA but it does not (see multimeter pic) 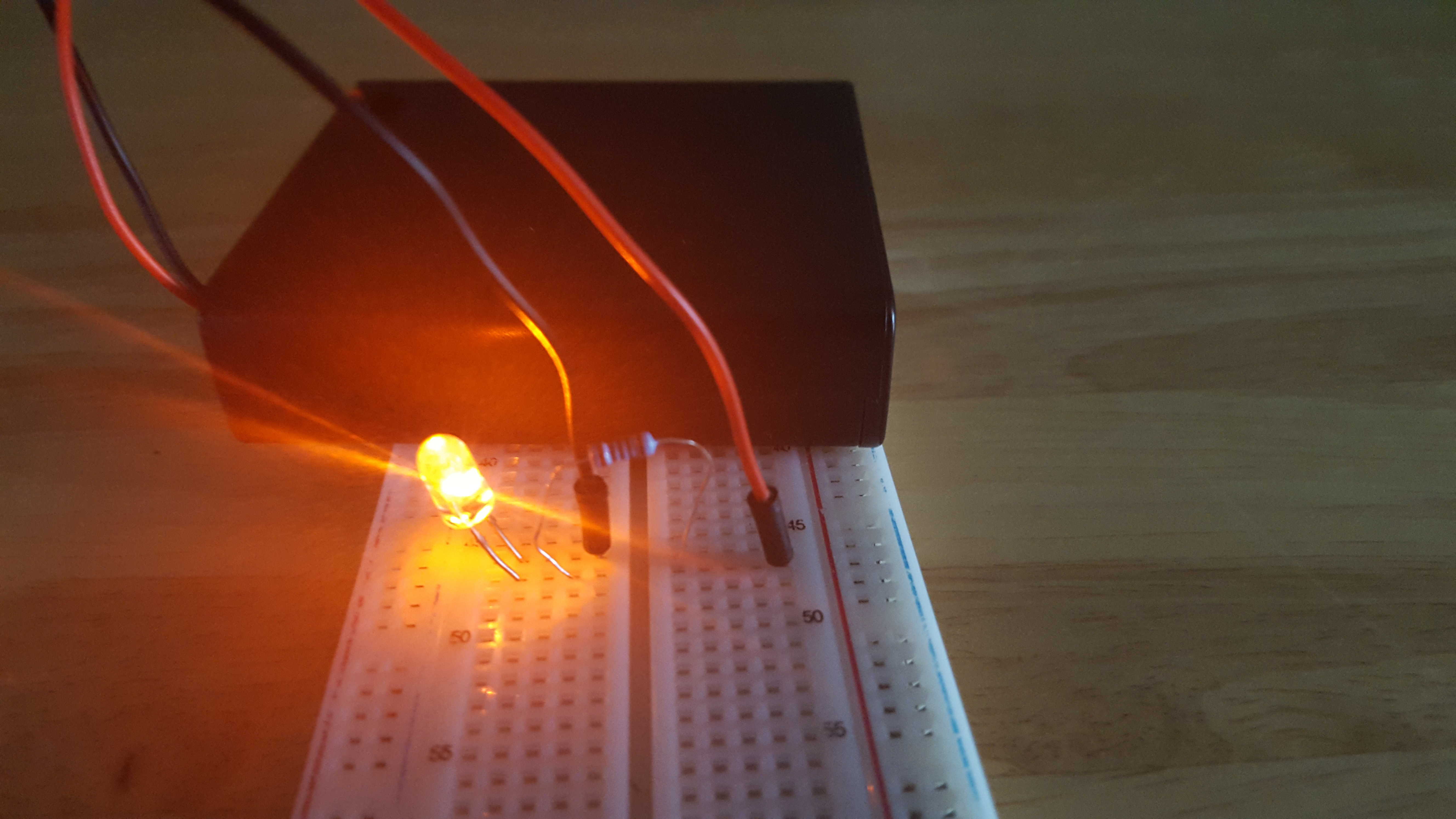 I would like to know why this is happening. I have tried different resistors, LEDs, multimeters, breadboards, power supplies but it continues to happen and I am very confused with the readings. 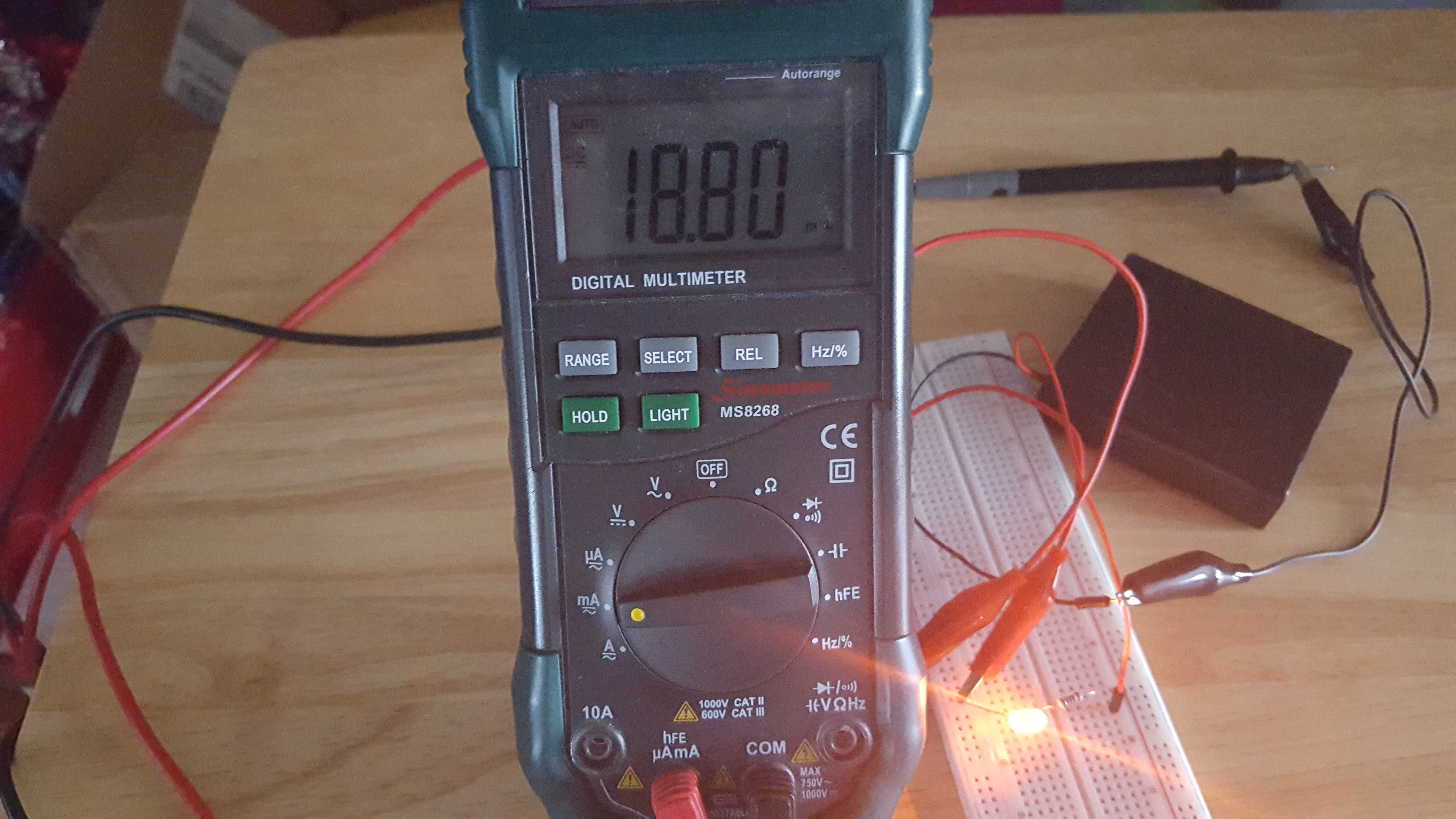 Diodes do not follow Ohm's law. Instead, when forward biased they have roughly a constant forward voltage. For an LED, this could be on the order of ~2V to 3V though you should check the datasheet.

Assuming your circuit looks like this (you should include a schematic of your circuit to clear up ambiguities): 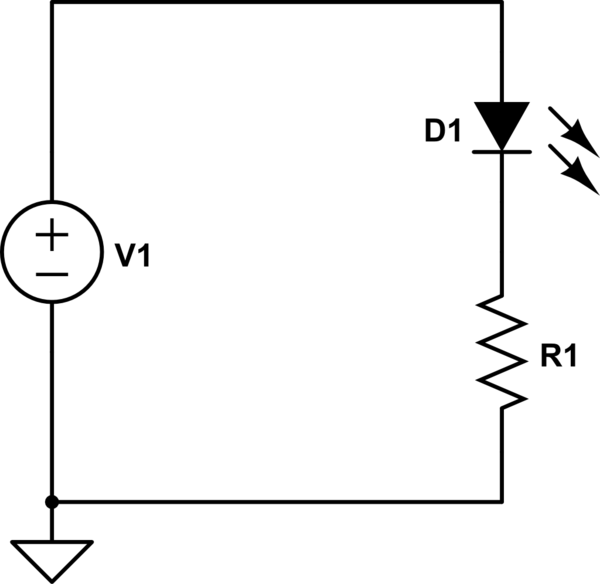 Which is much closer to the reading you were getting. Further discrepancies can come from any number of sources:

When you are calculating the current, are you allowing for the voltage drop in the LED?

A typical red LED will have about 1.8 volts across it when lit, leaving 4.2 volts across the resistor. With your 200 Ohm resistor, this should give a current of 21 mA. Yellow and green LEDs have slightly higher voltage drops, so will result in a slightly lower current.

The LED drops some of the volts. Because voltage is lost over the LED, then in combination with the resistor, there will be some current going through it. If the LED drops 2V, then the resulting voltage over the resistor would be 4V. 4/200 is 20mA, so that's close enough. The LED probably drops 2.2V not only 2.

Also, if your LED is rated to 30mA, do not try to drive it at 30mA, as the lifespan will be greatly shortened, and designing to a "max rating" in engineering is a terrible idea. Instead, run it more like 15-20mA for safety and reliability. Depends on the use of course, of it's blinking or pulsed then that's different to a constant-on LED.

Not the answer you're looking for? Browse other questions tagged current-measurement multimeter or ask your own question.

3
different current readings with a multimeter between the 200 mA and the 10 A slots
12
Why does a multimeter put more voltage to measure a smaller resistance?
1
Multimeter giving wrong current readings
3
Why isn't Ohm's law working for this simple circuit?
0
How to read a multimeter (digital) — should I get 2A readings from a couple of AA batteries?
0
Current readings of Ammeter
15
Why doesn't my multimeter show the correct Zener reverse voltage?
0
confusing multi meter scale