I have been trying to setup a custom security system for my house. I am using Milestone's XProtect system with multiple cameras and one Adam 6050 module.

I use the Adam 6050 module for magnetic door sensors to tell the system when a door is opened or closed. I would like to incorporate IR motion detectors into the mix since my cameras do not have IR capabilities.

Traditional indoor motion detectors have 4 to 6 posts, 2 of them power the device, 2 are the NO (Normal Open) or NC (Normal Closed) motion trigger, and the last 2 are often a NO or NC tamper alarm to alert if the device is being opened.

Unfortunately traditional indoor motion detectors are far too sensitive to be used outdoors. So I purchased an outdoor DC motion detector that typically triggers a flood light. It has lux and other settings to help me tune it for the lighting. However, it only has three wires coming out of it, the positive and negative for power, and the motion activated wire which is supposed to run to the light and grounds to the same negative that is used for power.

I would like to know how to wire this motion detector into my system so my Adam module can actually sense it being tripped. Short of the Adam module itself providing the power (which it is not designed nor I believe capable of), I cannot figure out a circuit that would allow me to sense that third wire being tripped.

If this is not possible, is there another type of outdoor IR motion detector with the 4 to 6 posts like the indoor one that is designed for a security system? I have been unable to find such an outdoor motion detector.

I happened to find the answer in the adam module forums, which I did not realise existed until this morning.

My biggest problem was that I was only thinking of an on or off switch, and I did not realise that the adam module has two different modes that the Digital In ports can detect signals using. The DI ports send out a constant 3VDC current which it can then detect if the circuit is completed or not. However, if you have a device that is already powered separately the adam module can also be triggered to an off state when the incoming voltage is below 3VDC but not 0VDC, and triggered to an on state when it is greater than 3VDC.

An excerpt from the forum:

" The datasheet shows the values that the module is expecting; >10VDC for "1" and <3VDC for "0". Even though you say the device is measuring 0VDC when not detecting anything - that is not the complete picture. The circuit is actually "floating", also known as a Open Circuit. "

The post then gives this image as the proper way to wire up an externally powered sensor. Notice the resistor which shorts the DI to the Iso Gnd port, this reduces the steady 3VDC to less than 3VDC from DI2 allowing the adam module to be triggered to a non 0 value less than 3VDC when no current is incoming from the signal terminal. 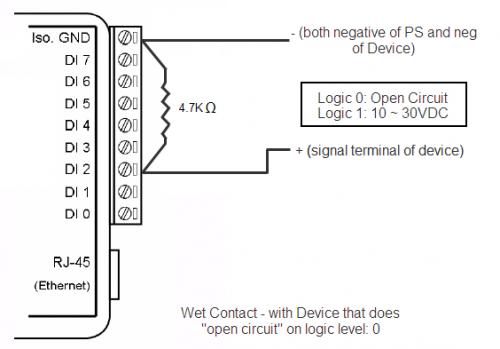 Not the answer you're looking for? Browse other questions tagged detection motion security or ask your own question.