I am using three 4V rechargeable lead acid batteries in series as a power source for an embedded system. The logic system taps out 8V which is fed into an LM7805 and the 12V is used as input to an L293D for powering 2 geared DC motors. However, the system resets intermittently. The batteries used are these : 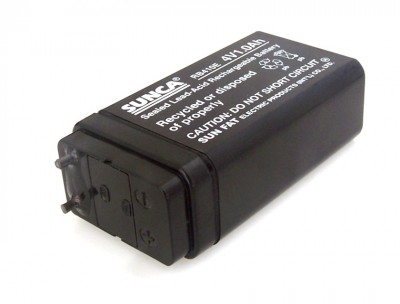 The system draws out around 30ma without the motors running. With the motors on, the current tops out at 150ma(no load on the motors). Can the batteries provide this amount of current continuously? Am I overstressing them?

We really need to see a schematic, or at least a thorough description of the 7805 regulator area & particularly its decoupling. But you'll be wanting a decent sized electro cap on the input to the 7805, & a pair of ceramics of probably 1.0 to 10uF (check datasheet of specific 7805 in use) on both ~8V input & 5V output, at the very least.

Those batteries might be OK, but I suspect only barely, depending on what kind of load the motors are driving - according to this Alibaba seller's photoed datasheets, they don't even reach their AH capacity at the 20H rate. With no-load=150mA you're at the 10H discahrge rate, where capacity drops significantly, so I'd say there's pretty high internal resistance. Under actual load their terminal voltage might be dropping too low & that's impacting on the 7805 which is in turn putting the MCU out of spec & causing reboots.

Also, drawing power unequally from different cells (tapping off 8V for the control system) is a recipe for premature cell (pack, actually, as Lead-Acid is 2.0V/cell, so theyre's presumably 2 cells in each of those 3 packs) failure if you aren't recharging those 2-cell-packs individually (as distinct from recharing all 3 in series with a '12V charger'), because the 2 cells that are powering the controller will always be at a lower state of charge & get 'flatter' than the other at the 'top' of the series string, and conversely that pack at the top may be being overcharged. Hard to tell without getting hands-on or a lot more info.

Also, there's a discrepancy between that datasheet and your pic - your pic says RB415E (yes? it's a bit blurry) which is 1.0AH, whereas that model# on this datasheet says it's a 1.5AH. Given the shirty specs (not even making claimed AH rating at 20H discharge rate), perhaps they've wisely derated their claimed capacity to 1.0AH & this is just an old datasheet. Who knows. This kind of shuzbut is par for the course on Alibaba stuff :-/

Not the answer you're looking for? Browse other questions tagged batteries embedded lead-acid or ask your own question.