Can a high current trace be on outer and inner layers at the same time?

TL;DR: Data doesn't conclusively suggest you can do this, but it seems to be worth trying.

The data from IPC-2152 (more in the answers below) is intriguing, but doesn't seem to conclusively say that what I'm proposing is possible. However, it does say that inner layer traces aren't thermally handicapped: in fact, it seems inner layer traces have lower thermal resistance than their outer layer counterparts (at least in still air).

Let's do a quick calculation to see how this would play out, using the following parameters 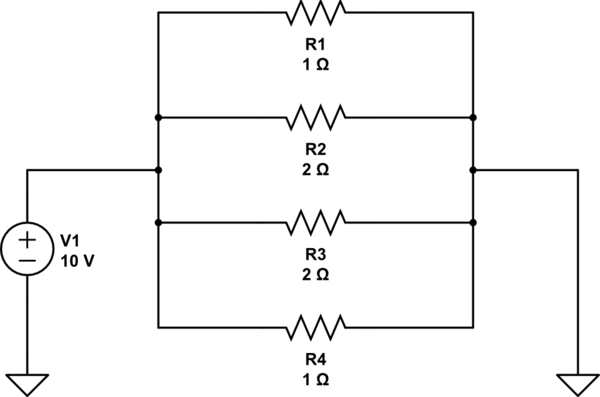 I'm doing some high-current (40A continuous in worst case) traces on a 4-layer PCB, and I'm trying to get the space consumption down.

But what about inner layers? On a 4-layer board, can I do the same across all 4 layers (e.g. 4x 0.25" traces, assuming all 4 layers are the same copper weight)?

My intuition says no -- the inner traces are much worse at shedding heat, so this may become a problem. But then again, copper has a positive temperature coefficient of resistivity, so perhaps these things balance to an equilibrium?

My question, in parts, is this:

My response is going to be the opposite to that of @NickAleeev.

I had similar questions in the past about trace current limits and here are my findings. I haven't done real world tests to confirm this (yet).

The standard for current capacity in a trace was established in a document (IPC-2221) which is what alot of online calculators use. The document is old and outdated. The new standard is the IPC-2152. The IPC-2221 is conservative, and if you can go that route it might be best too. If however, you are limited in space, then IPC-2152 would give you better results. Different calculators will give you different answers, depending on what standard they are basing it off. I have only found two calculators that use IPC-2152 and when I asked my fab house, they said that they can't tell me.

Also internal layers while they are sandwiched (in FR4) have a greater thermal conductivity than air. (The link below goes a bit more into it). They will dissipate the heat more to the surface, and if you have a solid plane between your internal layer and the outer layer, you have a pretty good sink for all that heat.

Have a look at a question I had asked in the past [what is the current limit through a trace? ] you can probably just jump to the end of the question and read the answer.

Some advice I got from this, was just build a dummy board, inject your current into a trace, and see how it reacts. All the, this table says this, that table says that, can't beat an experiment that you can test yourself.

[ disclaimer: I haven't done parallelization of traces into inner layers. I'm speaking only from general sense. ]
update in 2021: I've used this technique in a commercial project. It worked without a hitch.

Yes, you can parallelize traces into inner layers.

Yes, the traces on inner layers are worse at dissipating heat. If you want to split the current evenly, the inner traces should be wider than the surface traces. The calculation in the IPC standard accounts for that. If you look at the trace width calculator, you'll notice that it produces larger trace widths for inner than outer.

Not the answer you're looking for? Browse other questions tagged pcb layout high-current thermal or ask your own question.

14
what is the current limit through a trace?

30
High PCB copper thickness: What are the pitfalls?
31
How do I determine the area of copper needed on a PCB to provide adequate heatsinking for a power SMD MOSFET?
18
How critical is the layout of USB data lines / how does my layout look?
14
what is the current limit through a trace?
6
I2C PCB Layout Considerations
1
Ways to determine approximate magnitude of crosstalk between PCB layers
0
PCB layer copper thickness calculation
0
Sizing of different PCB polygons on different layers for high current
0
On which layers of 4 should the trace antenna be (433MHz)?
1
Stacked Dielectric constant in PCB