What transistor do I need to drive many LEDs and how should I hook it up?

I know that a transistor amplifies a signal, but I've never used one. I have this design here and I want to add 15 LEDs connected to each pin, instead of 1.

How I could incorporate a transistor to help me achieve a strong enough current to power the LEDs ?

The simplest solution would be to place the 15 LEDs in series and use a high enough power supply. The "high enough" is the problem here. You would need at least 30V and that's too much for the LM3915. Placing the LEDs in 3 parallel strings of 5 LEDs each isn't a solution either; the LM3915 can't sink enough current to drive the 3 strings.
So we'll need external transistors. The driver's outputs are most likely open collector NPNs. Then this schematic should work: 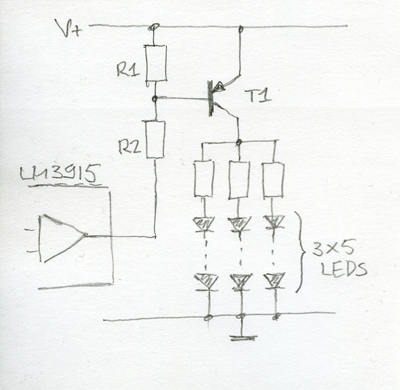 If the LM3915's output is low (LEDs must be on) T1 will be switched on via R2 and supply current to the LEDs. Those could have been placed in a single string, but then you would need a too high voltage for V+. Now 12V will be sufficient for common red LEDs.
If the LM3915's output is switched off R1 will pull the base of T1 to V+, and T1 will be switched off.
The components' values will depend on V+ and the current required for the LEDs. For V+ = 12V you could make R1 = 1k\$\Omega\$ and R2 = 4.7k\$\Omega\$. This will give a base current of 2mA, which is enough to saturate most transistors, so T1 can be a PNP type like a BC556.

Not the answer you're looking for? Browse other questions tagged led transistors schematics or ask your own question.