Gain of filter is higher than calculated - why?

For this project I am required to produce a table of predicted values for the gain of the filter. I produced this table and my maximum gain was about 1.5. In practice, I had a maximum gain of almost 2. My question is, why is the gain higher in practice than in theory? I thought that it could be other impedances in the wires, but I reasoned that that shouldn't affect the gain since the impedance of both the feedback loop and the input would increase equally.

I calculated the gain using the capacitive reactance formula as well as the formulae for resistances in parallel and in series. For example, the expected gain at 2100Hz:

Why is my theoretical result significantly different from the practical result?

The transfer function is

and the maximum gain is 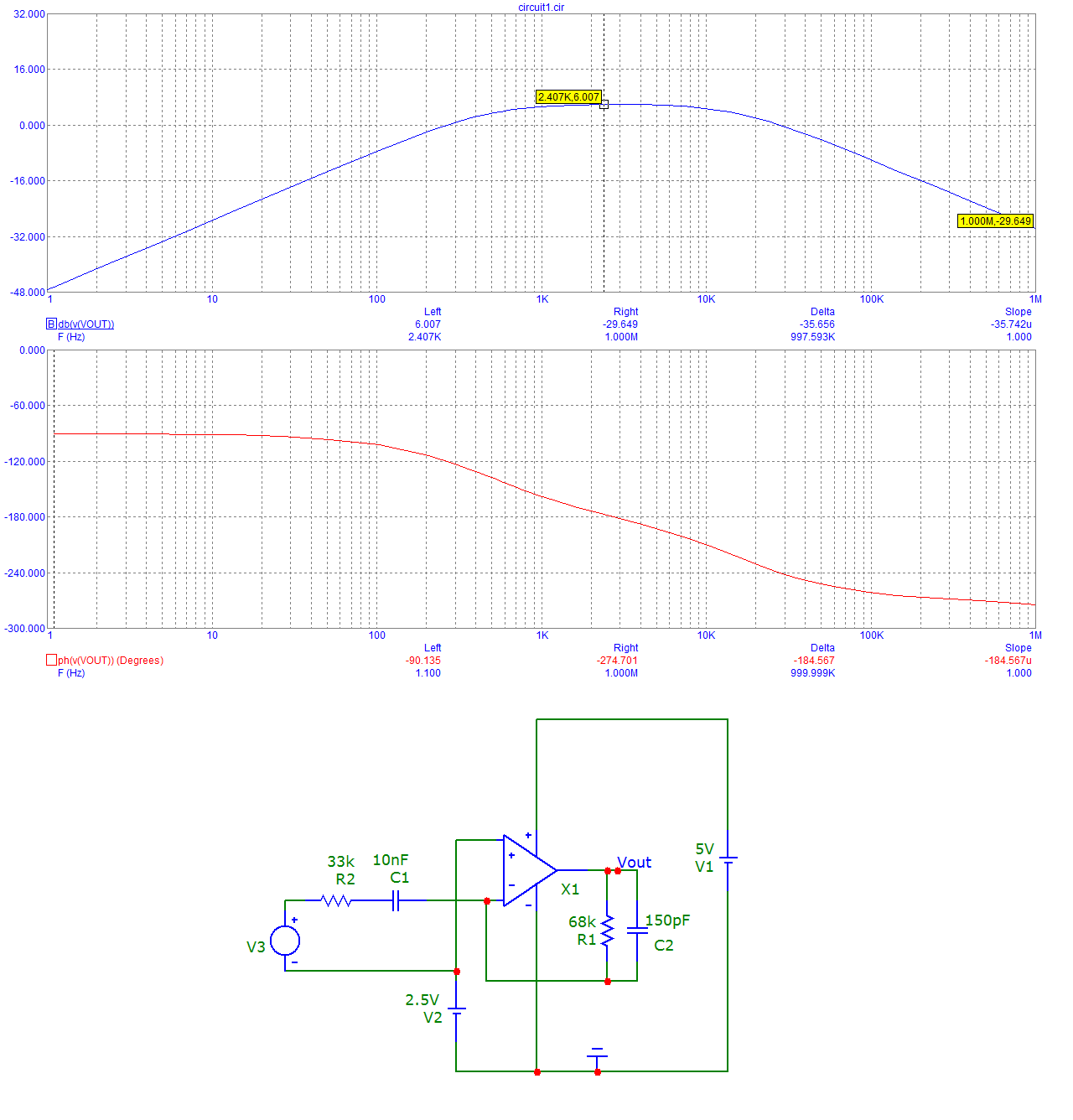 6.007 dB is a voltage gain of 1.997 so I guess your mathematical approach is flawed in some respects.

The expression derived by LvW is correct but there are no steps showing how he got there. Of course, if you compute the gain \$H(s)=-\frac{Z_1(s)}{Z_2(s)}\$ in which \$Z_1(s)=R_1||\frac{1}{sC_1}\$ and \$Z_2(s)=R_2+\frac{1}{sC_2}\$ you'll get there but a) you can make mistakes while developing the expression b) you will need to rearrange the formula to unveil the needed gain in the flat portion. I will show how the fast analytical techniques or FACTs (see this book) will get you there just by inspecting simple schematics, no algebra at all. Look at the below schematic: 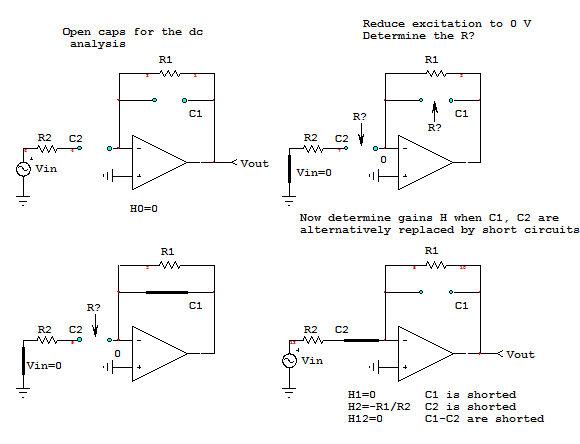 With a proper factorization, you can rework this transfer function in a low-entropy form in which you immediately see the gain you wanted: 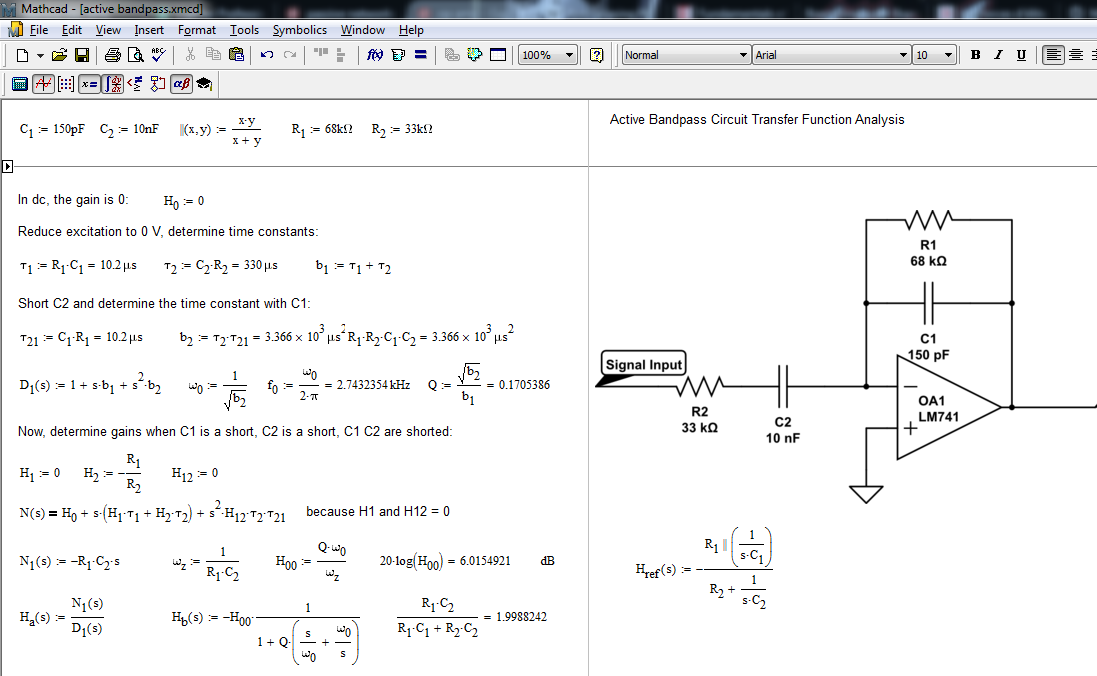 You can apply the FACTs to passive or active circuits. The nice thing is that you individually determine the coefficients of the numerator and the denominator via small sketches. That way, if a deviation exists between the raw formula and what you have derived, it is easy to solve the guilty intermediate step and correct it. With a brute-force analysis, you would have to restart from scratch. An introduction to the FACTs can be found here. I encourage students and engineers to acquire that skill given the ease and speed it provides when analysing transfer functions.

Addition to the original answer following a suggestion from G36:

A question was raised by G36 in the comments section on how to apply the FACTs in case \$C_1\$ was in series with \$R_1\$ rather than in parallel as in the original question? If you try to apply the FACTs and determine the time constants of this new circuit, you will find infinite values for \$\tau_1\$ and \$\tau_2\$ because there is no dc path when both capacitors are removed from the circuit (and \$V_{in}\$ reduced to 0 V). This is an indeterminacy and it must be removed. The simplest trick consists of adding a dummy resistance \$R_3\$ in parallel with \$C_1\$ and update the circuit as below: 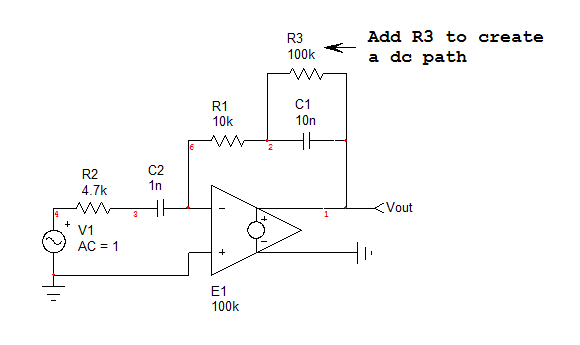 The new picture to determine the time constants is shown below and you can see that the dc path created by the addition of \$R_3\$ helps us getting rid of the two indeterminacies: 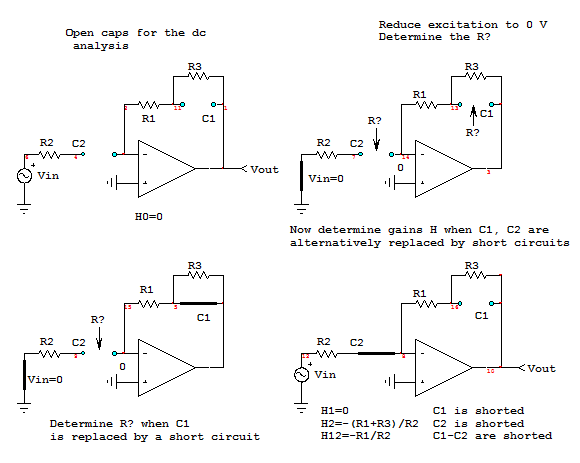 You can now nicely determine all the time constants including \$R_3\$ and follow the path given in the original reply. If everything goes well, you should be find:

Now factor \$R_3\$ in the numerator and the denominator then simplify:

The below Mathcad pictures confirm these calculations. First, \$R_3=100\;k\Omega\$: 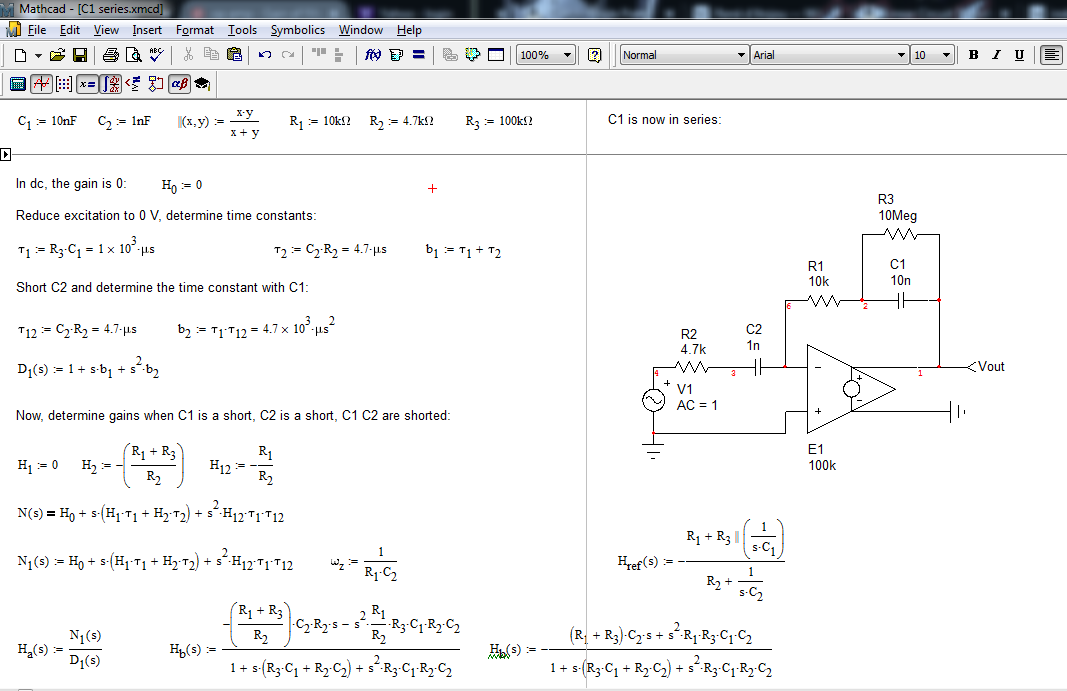 It clearly confirms the gain equal to 0 in dc:

When \$R_3\$ is now pushed to infinity, the dynamic response turns into the response of a zero and a pole while the zero at the origin has disappeared:

Which clearly isn't true as if you dc-bias this circuit (without \$R_3\$), you should get 0 V in the output. Considering the absence of dc path in this case, I am not sure if this circuit has any physical sense or application as such?

Not the answer you're looking for? Browse other questions tagged operational-amplifier active-filter or ask your own question.