I understand that the equivalent circuits describe the behavior of amplifier for signals of low amplitude that allow us to assume that the circuit behaves linearly. My questions are: 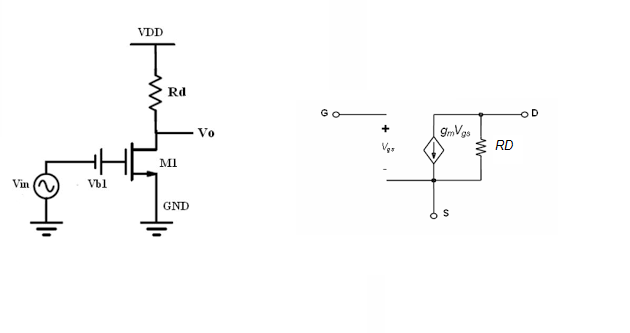 As in the above figure, the small signal equivalent model shows that the resistance tied between drain and VDD(which is shorted) to be in parallel with the the current source gmVgs. However the voltage across resistance and the voltage VDS(Vo) are not quite the same. How is this accounted in the above model?

Is there any other way to derive expressions for gain and I/O impedance? I tried to draw an equivalent circuit with all the dc sources present.Note that the voltage across RD is not VDS(as it should not be). Is it correct?

But the expression for gain derived by shorting VDD is -gmRD.

The true answer to your question unfortunately involves some bits of advanced calculus. Small signal models are derived from a first-order multi-variable Taylor expansion of the true non-linear equations describing the actual circuit behavior. This process is called circuit linearization.

Let's consider a very simple example with only one independent variable. Assume you have a non-linear V-I relationship for a two-terminal component that can be expressed in some mathematical way, for example \$i = i(v) \$, where \$i(v)\$ represents the math relationship (a function). Regular (i.e. one-dimension) Taylor expansion of that relation around an arbitrary point \$V_0\$, gives:

where \$R\$ is an error term which depends on all the higher powers of \$\Delta v = v - V_0\$. The linearization consists in neglecting the higher order terms (R) and describe the component with the linearized equation:

This is useful, i.e. gives small errors, only if the variations are small (for a given definition of small). That's where the small signal hypothesis is used.

Keep well in mind that the linearization is done around a point, i.e. around some arbitrarily chosen value of the independent variable V (that would be your quiescent point, in practice, i.e. your DC component). As you can see, the Taylor expansion requires to compute the derivative of \$i\$ and compute it at the same quiescent point \$V_0\$, giving rise to what in EE term is a differential circuit parameter \$\frac{di}{dv}\big|_{V_0}\$. Let's call it \$g\$ (it is a conductance and it is differential, so the lowercase g). Moreover, \$g\$ depends on the specific quiescent point chosen, so if we are really picky we should write \$g(V_0)\$.

Note, also, that \$i(V_0)\$ is the quiescent current, i.e. the current corresponding to the quiescent voltage. Hence we can call it simply \$I_0\$. Then we can rewrite the above linearized equation like this:

This latter equation describes how variations in the current relate to the corresponding variations in the voltage across the component. It is a simple linear relationships, where DC components are "embedded" in the variations and in the computation of the differential parameter g. If you translate this equation in a circuit element you'll find a simple resistor with a conductance g.

To answer your question directly: there is no trace of DC components in the linearized (i.e. small signals) equation, that's why they don't appear in the circuit.

The same procedure can be carried out with components with more terminals, but this requires handling more quantities and the Taylor expansion becomes unwieldy (it is multi-variable and partial derivatives pop out). The concept is the same, though.

Small signal models are nothing more than the circuit equivalent of the differential parameters obtained by linearizing the multi-variable non-linear model (equations) of the components you're dealing with.

When calculating the gain of an amplifying stage, do the DC voltages appear in the gain formula ? NO! However, the value of some of the parameters (like the transconductance gm) DEPEND on DC parameters.

Therefore, it is the purpose of the the so-called "small-signal" equivalent circuit diagram to visualize the interaction between all the relevant parameters - thus, allowing to derive the desired formulas (for gain, input- and output impedances,..).

But note that such a an eqivalent circuit diagram is valid for small-signals only because transistor parameters like gm are dynamic/differential values only. Moreover, it is valid for a fixed DC operating point only (but the DC values do not appear in th diagram).

Answering your last question: For our calculations (gain, input impedace,..) we do not need these small-signal eqivalent diagrams at all. But they can help to derive equations and to UNDERSTAND the interrelations between some parts of the circuit (wanted, unwanted feedback effects). These diagrams are a visualization of the known formulas which were derived from transistor physics - together with known rules for circuit analysis (Ohms and Kirchhoffs laws). And all these formulas can be derived also from the actual (real) circuit diagram also.

0
How does the signal change cause a current change in this circuit?
0
Determine the poles of this circuit

2
Input Characteristics of MOSFET in triode region?
0
Gain and output impedance of an amplifier
0
How to do DC Analysis for a Common Source Biasing Circuit using NMOS
1
Do we have a voltage drop across this ideal current source?
0
Output voltage in MOS cascode amplifier
2
Relationship between Vgs ang Vds
1
Why turn-on speed of a MOSFET is linked to diode reverse recovery time
0
Diode Connected MOS