i want to use IR sensors with emitter part ( IR led ) - calibrated with an IC timer to give 38KHZ IR signal - mounted side by side - not face to face like the counter module - to the receiver part ( TSOP4838 ) which will turn on once something reflect the IR signal back to the receiver. [ the default is that IR signals will go straight forever without being seen by the receiver ]. 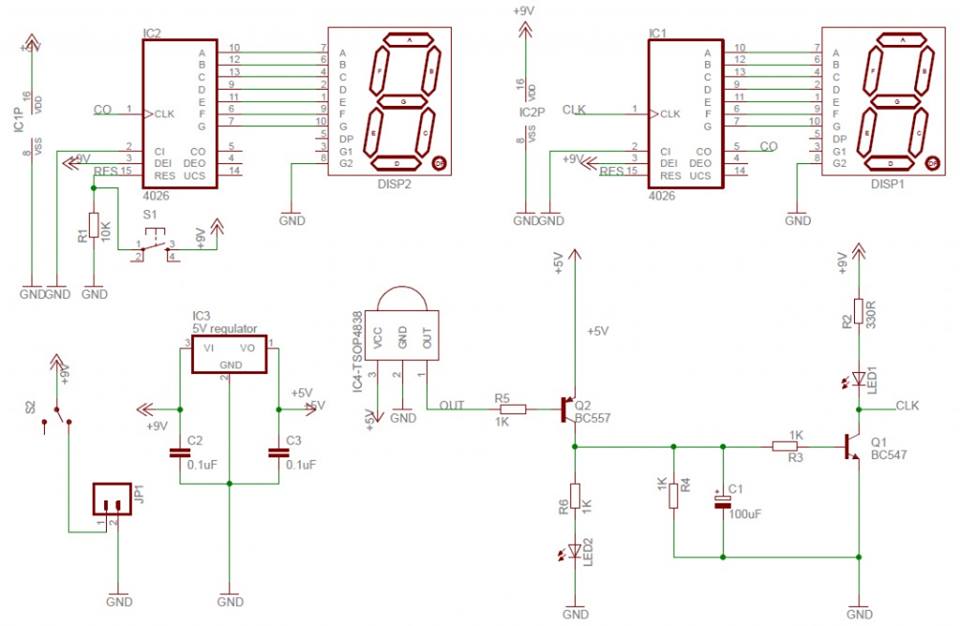 the problem is that it gives an instant pulse to trigger the 7-segment display. but in here i don't need it to be instant. how could i implement it to make the LED bright as long as i block the path [ not instantly ]. and to be off whenever there's no object in front of the robot

You have misunderstood the circuit. It responds to a burst of 38 kHz IR, probably from a remote controller. Since any remote gives a short burst of IR when a button is pushed, the receiver produces a brief pulse as well.

In order to do what you seem to want to do, you need to learn how to drive an IR LED continuously at 38 kHz, and use this as the optical emitter whose beam gets blocked.

Not the answer you're looking for? Browse other questions tagged transistors resistors circuit-analysis infrared trigger or ask your own question.

6
How should I wire up the circuit to connect a TSOP4838 (Radio Shack 276-64) infrared receiver to an Arduino?
1
Poor man's IR obstacle sensor make sense(improve) from signal under daylight
2
Is there any material from which lenses are made which are fine with IR signal? I mean really cheap ones
0
emitter follower conofiguration
0
Build a thin line follower?
2
IR sensor for line follower not working in day light
1
Review/improve anti collision circuit using hall effect sensors
2
Help with Voltage Divider driven NPN emitter follower
1
Stabilizing IR Emitter/Receiver circuits
0
Restrict IR sensor field of view