OK so I've been asking around and reading how to connect ground pins to ground. Some said create vias to the ground planes. But should I do that for every pin? Because sometimes when I create via to each component then route their connection on the ground plane, the net line doesn't disappear all the time.

Then other sources say create polygon pours after the connection is done. Sounds fine.

Honestly I'm a bit confused, can anyone just clarify how to route ground connections? I have tried connecting initially but I feel that something is not right about it. 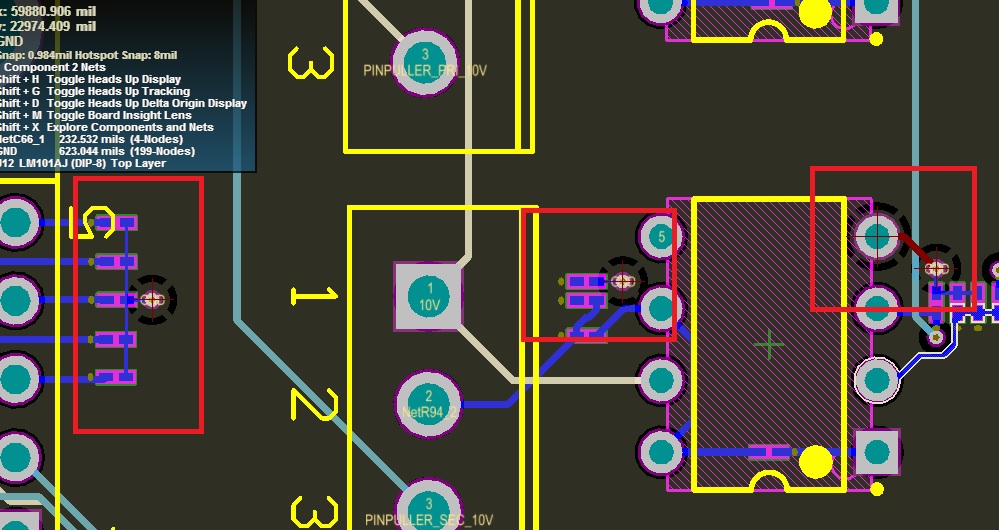 Some said create vias to the ground planes. But should I do that for every pin?

Through-hole pads don't need another via --- they already extend through the board to all layers.

For SMT, one via per pad is a starting point. Each component probably has its own current draw so you want to have enough vias to accomodate that. But you might find cases where it's not needed. For example, a bypass capacitor next and the power pin for an IC placed near each other probably can share one via.

Because sometimes when I create via to each component then route their connection on the ground plane, the net line doesn't disappear all the time.

Generally I hide the ratsnest lines for power and ground pins during the initial part of the design. Then they don't clutter things up while you're routing the signals. Once signals are routed, turn the power and ground net ratsnest back on. As you connect each pad to the planes, you should see one netline disappear. It might not be the one you expect, but by the time you connect all the pads to the planes, they should all be gone.

Then other sources say create polygon pours after the connection is done.

Plane layers are negative layers where copper is present on the entire surface, except where features are defined. If you make a polygon on a plane layer, you will produce a region with no copper, not a region with copper.

Making polygons last is mainly a convenience: Redrawing polygons can take a long time, and you don't want to be waiting for it to happen all the time during your design, so you draw your polygons last to avoid that inconvenience during most of the design process.

Not the answer you're looking for? Browse other questions tagged pcb altium routing or ask your own question.