I understand that galvanic isolation is necessary to prevent shock and injury, but I don't understand when (or if) it is necessary to isolate the high voltage/high power side of a circuit from the low voltage control side. I feel like high power/high voltage switching can in some high load cases cause a large switching transients that can run through the power or ground lines and potentially harm the low voltage electronics. Is this correct? Should ADCs, microcontrollers, FPGAs, etc be galvanically isolated to protect them from high energy switching transients?

Microcontroller input pin can supply or take in a maximum value of around 20mA but varies depending on the controller you are using and same can be said about voltage whose limiting value is normally 5V , you can check data sheet for such specs. FPGA and good controllers minimize the transient response acting upon the input.Baseline is that if you use you device within the limits , transient are less likely to happen or the device has precautions to deal with these minimal fluctuations.In PIC there is threshold value called brown out voltage which tells your controller to power it self when input power supply has a value more than the threshold and can safely be assumed to be stable.

Sometimes it is necessary to connect high voltages to your controller ADC through a scaling circuit that gives output from 0 to Vref (In PIC default Vref is Vdd). 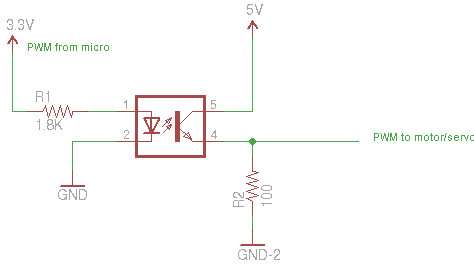 You can also use high power MOSFETS for isolation as no current will drawn from the controller due to very high input gate impedance, but this option depends how much current is drawn by the load through the Drain and Source terminals of mosfet .You can operate to maximum of 30A as suggested by Id vs Vds Graph in this link HERE but datasheet should be referenced for specific products

I believe it is more important to eliminate the transients so that the circuits operate correctly rather than because they might be damaged. Keeping the high voltage circuits on one side of the PCB and the low voltage circuits on the other side, will require fewer decoupling capacitors.
If these circuits are going to be used for medical applications, then you must isolate the power mains from the circuits and the electrodes from the patient (use optic couplers, as suggested).

2
How do I drive a MOSFET working under high voltage while keeping it insulated from the rest of the circuit?
1
High voltage to low voltage conversion from multiple channels
1
Power IR2110 from a low voltage AC Source
2
Does the source impedance of DC-AC converter always represent losses?
0
High voltage indicator circuit and short/open circuit protection best implementation
0
Power Electronics - Voltage Sensor Layout