Any clever way to provide 3.3V with good current output from a 9V battery?

I'm sorry for any English mistakes as I'm not used with using it when talking about technical stuff.
I have been using some ESP8266 WiFi modules with Arduino Mega for a project. They work with 3.3V Vcc but require some good amount of current (it can go over 200mA, as seen here http://wiki.iteadstudio.com/ESP8266_Serial_WIFI_Module), which make them impossible of powering from Arduino, and that's why I'm using batteries to power the VCC pin. I keep other two pins (CH_PD and RESET) at HIGH state, but I keep them at 3.3V pin from Arduino, as they seem to steal some precious current from ESP8266 VCC if connected together to the battery and make the ESP8266 unstable.
I used LM1117 because the original idea was to extract 3.3V from 5V Arduino pin for more current output, so an LM7833 would not work. Extracting 3.3V from the 5V didn't work as expected, so I'm using a battery now. 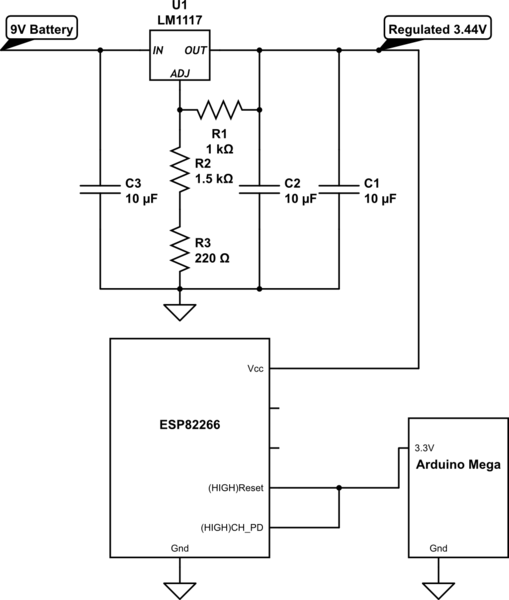 This circuit has been working fine with some ESP8266s, but some of them seem to be requiring more power, since they are failing to get WiFi connections most of the time, taking too many attempts to connect. Also, LM1117 eventually heats quite a bit and drains a lot from the battery. As you can see, I already power the ESP8266s from over 3.4V (although this level seems to drop a bit once I attach the ESP8266), and I'm kinda afraid to rise this level even more. 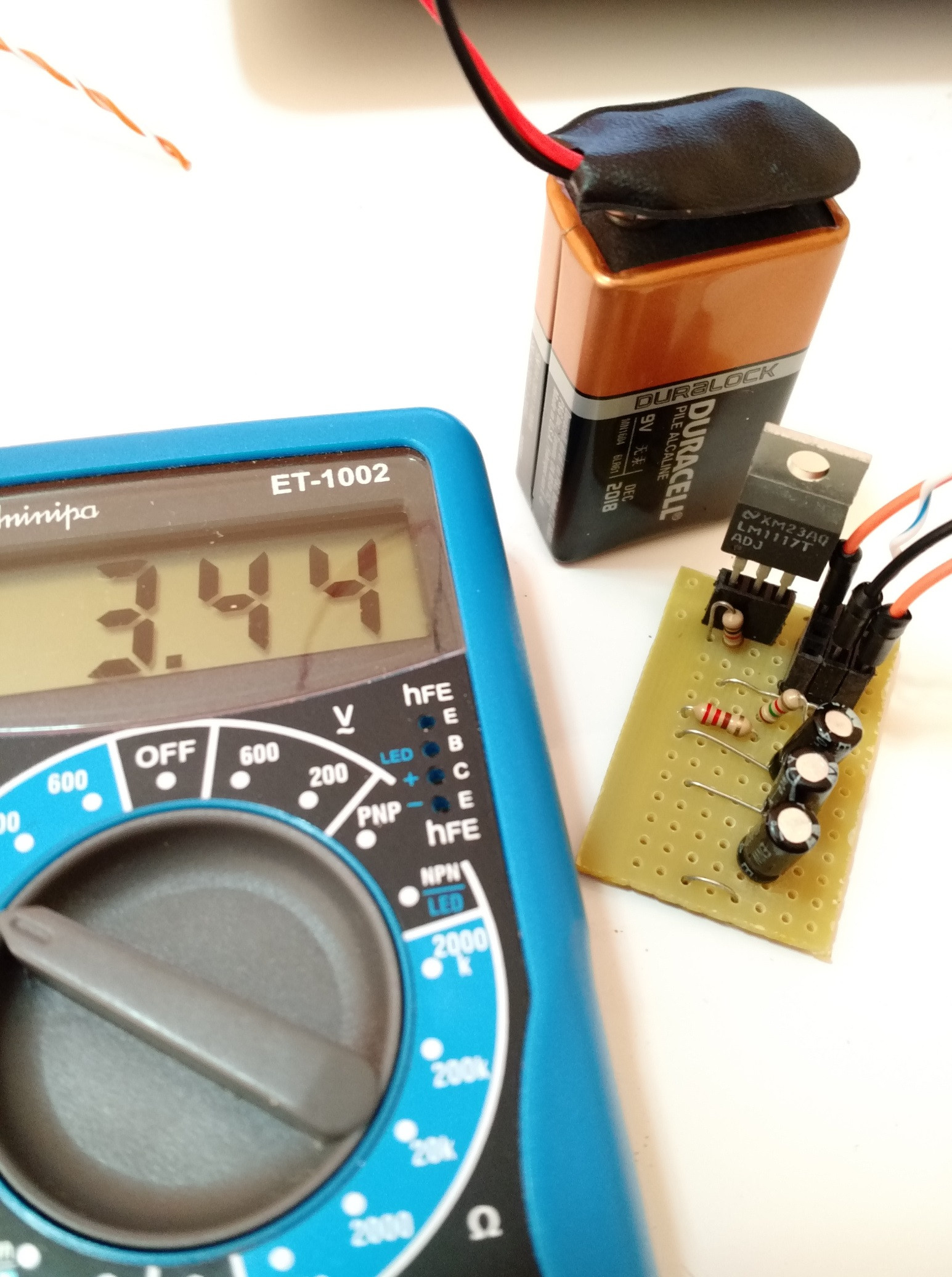 Do you have any ideas on a better circuit to provide 3.3V with good output of current for my ESP8266?

9V batteries are great for smoke alarms, but pretty shocking for anything else. The capacity of a standard PP3 (alkaline) is about 400mAh and has an internal resistance of around 5 Ohms (in fact some low duty ones internal resistances closer to 20+ Ohms). So basically not a lot of energy, poor current capability, and lots of energy wasted internally. If you use a linear regulator as you are, you are wasting 63% of that energy as heat in the regulator. You'd end up with a run time of only about 2 hours before your battery dies. The regulator will be dissipating over 1 Watt which is quite a lot without a heat sink.

Using a switching regulator would help - you reduce the current draw from the battery which reduces the losses on the internal resistance, whilst also massively reducing the losses in the regulator, so you claw back some of that wasted energy for a longer running time. But it still isn't a lot - at 200mA draw on the output, and assuming you have a 90+% efficient switching regulator, theoretically that would give you around 5 hours running time (factoring in the internal resistance). And that is not accounting for the discharge curve - the voltage will drop off much sooner than 5 hours, and as it does the switching regulator will start drawing more and more current from the battery to try and maintain the output voltage meaning more losses internally in the battery.

A standard alkaline AA battery by comparison has a capacity of around 2500mAh or more and an internal resistance of <0.5 Ohm. The trouble is the voltage - 1.5V. There are however many simple switcher ICs and modules out there that can run off a single AA or AAA cell and step up to a 3.3V output. This combination would give you around 4.7 hours with one cell and a boost converter. The main reason for the lower run time is there will be a much higher current draw from the battery than at the output as is the way with boost converters, so there will be more lost in the internal resistance. But even still you get a similar run time as a PP3 in less space, and with batteries that tend to be far cheaper. Or you could use the same approach but go for a D cell battery for example, those have a lower resistance and much higher capacity (closer to 15Ah), so with one of those and a boost converter you would have a run time of around 30 hours - 6 times longer than a PP3.

If you were to use more than once cell, i.e. go for say 3 AA batteries in series, your voltage will go up (capacity stays the same) and so will the run time. With 3 in series and a step down converter, you would have a run time of closer to 16 hours (at 200mA). You could even simply use a low drop out linear regulator to bring that down to 3.3V - it would hurt efficiency, but you would still be able to get a running time of around 12 hours - so still much more than the PP3.

No matter how you try to do it, a that type of 9V battery can't supply enough current. I suggest that you use a larger cell type, perhaps 1 x 18650 Li-Ion or 3 x AA NiMH in series then you will get a useful runtime and "probably" not need to regulate the voltage, although ultimately your actual required runtime will determine the battery cell array that is required to get there.

You could use a simple step-down module like this one, available on AliExpress for < $5 for 10pcs (search for mini-360): 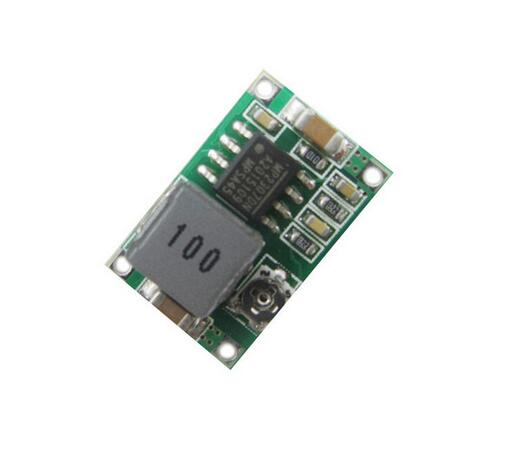 Of course you could try building a power supply yourself, but at this price, it would only make sense as exercise.

Not the answer you're looking for? Browse other questions tagged voltage-regulator 3.3v esp8266 or ask your own question.