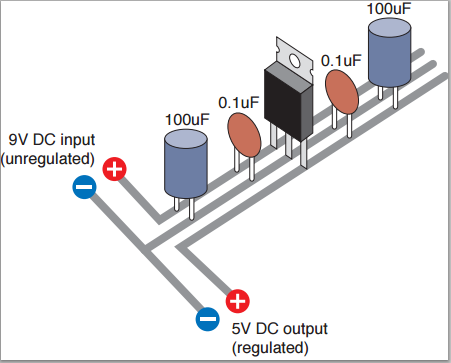 Right of the bat this configuration looks strange to me because of the need for using two different types of capacitors in parallel. My first thought was why not just combine the two capacitors and use one bigger one instead?

Also, interesting to note is that the bigger capacitors sit further away from the LM7805 than the smaller capacitors. Why not place them the other way around? There must be a good reason for this.

Could someone offer an explanation for this awkward capacitor configuration need?

Indeed it's a pretty horrible layout, though almost anything is acceptable with a 7805 and a digital circuit.

The ceramic disk capacitors (last-century single layer version of today's ubiquitous MLCC chip capacitors) have lower impedance at high frequencies than the aluminum electrolytics (which have a certain amount of inductance and ESR), however they are limited in value so they can't cover the whole frequency range. So you get a lower overall impedance (and some damping) at a lower overall cost by combining two different types and values of capacitors (a 100uF ceramic disk capacitor would probably be the size of a dinner plate).

The ground trace layout is the most egregious- there should be a star connection at the input filter capacitors. 100uF on the output is unnecessarily large, but it won't hurt anything (a 100uF/10V cap is pretty small physically). 100uF on the input may or may not be sufficient.

The low-value capacitors hold little charge, but have a lower impedance to high-frequency signals. This can help keep the supply stable while digital circuits are switching (which may only take nanoseconds). They also effectively short out any noise on the power lines noise, giving a cleaner supply and reducing electromagnetic interference.

There's a small value cap and a large value cap.

The large one filters some frequencies but not all, it is not so good at filtering high frequency noise.

That's where the small value cap comes in, it takes care of filtering the high frequency noise.

Not the answer you're looking for? Browse other questions tagged voltage-regulator decoupling-capacitor or ask your own question.

12
Why too many capacitors in parallel for Vdd supply net? Can't we just add all to replace with one big capacitor?