I'm pretty new to electronics, and I'm making a circuit to control EL wire with a DC logic control signal. Specifically, I would like to blink the EL wire with the output of a 555 timer.

My first pass at this was with an optoisolator. MOC3031 data sheet

I ripped out the optoisolator and replaced it with a triac, so now it looks like:

And everything works perfectly. I'm happy in the sense that I have a working circuit, but I'd like to know what changed. Can anyone explain why?

I want to switch some of the EL elements on and off while the inverter remains switched on and drives other EL elements continuously. The frequency is likely higher than 50-60 Hz and the voltage is probably not a clean sine wave.

Something is being missed here. The optotriac is quite capable of switching that load current, however the triac in the optoisolator is handling the inverter's high frequency AC differently from your 'triac'. It's designed to control mains frequency AC - 50 or 60Hz, and is too slow to turn off at the very brief zero crossings when it is fed with ~1kHz AC current

Edit: there is a good app note from Vishay here which makes it a bit more clear. You cannot just use the static dv/dt spec - that is what prevents the opto from turning on when it is off, rather you need the (lower) commutating dv/dt, which may not be given.

In fact, perhaps it's not actually a 'triac' but an alternistor that you're using, which would tend to perform better because the semiconductor structure is different.

The answer in that case is to use a more appropriate switching element, such as a OptoMOS SSR.

Based on your response to my question the answer is relatively simple.

A DC powered device draws DC current. A triac or triac-opto coupler stays on as long as the current through it is above its minimum holding-current.

Holding current is just "stay-on current". Once it's triggered as long as the current is larger than the minimum, it will stay on. This is why they are only used for AC voltages or at least some other voltage that goes to 0 regularly, to make them switch off.

But,... why does the Triac actually switch off?

Simple: The Triac is meant for a higher current, as such its holding current is higher. One of those MOCs can only handle about 100mA depending on type, so their holding current is probably in the single mA's (I'm too lazy to Google a datasheet now).

Your triac might be made for a current of 10A or such (you don't tell us), at which point its holding current can easily be up to 50mA.

In general you want to not use Triacs and such for low voltage DC, because they also waste a lot of energy: They always have a comparatively large voltage drop, even when on.

You should probably just switch to a transistor or MOSFET: 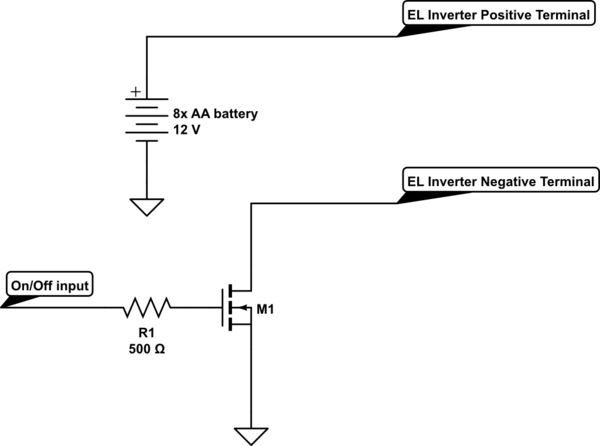 Or if you want opto-isolation: 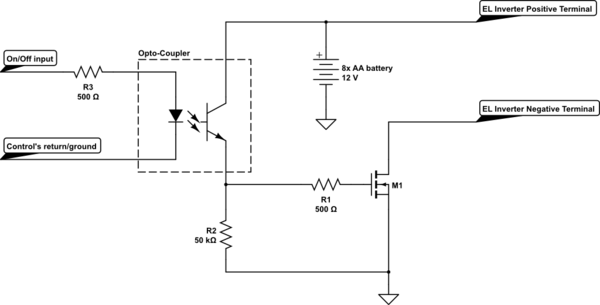 The datasheet for the MOC3031-M specifies that it's meant to be a trigger and not directly drive the load. As a result, I would imagine that the internal phototriac is much more sensitive than the eternal triac depicted in your second circuit and is probably why the phototriac was never turning off and your EL wire was always on. Instead, you should drive an external triac using the optocoupler to switch the load. See, for example, this circuit from the datasheet:

If you put the optoisolator in-between your 555 timer and the triac from your second figure, you should get the desired result.

Not the answer you're looking for? Browse other questions tagged transistors ac opto-isolator triac el-wire or ask your own question.

2
Arduino triggering a TRIAC for EL Wire, no optoisolator
0
Measuring the output of a phase control triac
0
Triac BTA316 does not turn off
2
Controlling a 240V AC Universal Motor with Microcontroller, Optoisolator & TRIAC
2
Why this optoisolator triac (MOC3021) using for DC/DC switching is not turing off?
3
TRIAC won't turn on
1
Triac Circuit Won't Fire With Small Loads
0
Optoisolator Clarification - Logic Output vs. Transistor/Photovoltaic Output?
2
My triac turns on when gate attached to vcc (good)... but also when connected to ground (bad)
2
TRIAC won't turn on/turn off