How can I choose between the two? When can I use single and When I must use double? ( speaking of simple circuits). Do I have to use a double layer when using ICs? When u If I have a circuit consisting of an arduino, a motor driver and a Bluetooth module can I use single? If no , why not?

Single sided and double sided is a matter of routing and design convenience (as well as improved circuit implementation quality) at the cost of a more complicated manufacturing process. This difference in complexity has largely dissapeared in the commercial fab world and single layer boards have virtually no price difference with double layer boards. You can have a run of a few reasonable 2 layers boards done with a 2 week lead time, with pretty decent capabilities (8 mil traces 12 mil holes) at a large number of board houses these days for under $100 USD.

If a hobbyist or student finds themselves making convoluted routes or more than a handful of jumpers to achieve the layout on one layer a two layer design may be worth their time. It gives you flexibility in routing and more breathing room for things like proper ground connections and decoupling and other electrical considerations. However, all of this is predicated on how complex your circuit is, if it fits on layer then stick with that.

I disagree with the other answer in that it is fairly straightforward for a hobbyist to make small runs of double layer boards with a few basic tools and a good amount of care. Design considerations for home making these boards for success is to avoid 90 degree bends and stick to 60mil traces until you can verify your home-manufacturing capabilities.

The basic process is photolithography using a photoresist treated PCB (sold as a kit usually with chemicals included on the cheap) and a PCB layout stencil printed on transparency with a good laser printer.

The accuracy achievable by this method depends primarily on how dark you can get your photomask stencils. Refraction at the edges causes a smearing that shrinks the traces a bit. The alignment largely depends on the quality of the printing and the drilling. 1/8" vias with 1/16" holes and even a few 20 mil signal traces is achievable with basic office printer. The other limiting factor is the amount of time spent etching, incorrect exposure time or excessively thick stencil will leave some photo resist on etched areas, requiring more time for etching and more likelihood that the etchant will get through the photoresist on your traces.

The registration is key and is largely a matter of the care with which you mount, drill, and handle the PCB prior to exposure.

Double-sided PCB's are pretty hard for a hobbyist to make. So stick with single-sided. Obviously you will have to make it large enough to fit all the components plus room for the traces.

With double-sided, layout is easier because if two traces cross, you can just extend one trace under the board, cross under the conflicting trace on the top, and then have it reappear on the top side.

But you can do the same thing with a single-sided board. Route the trace just up to the conflicting trace, and add a via. Do the same for the other side, where the original trace starts up again. Then put a piece of wire between the two vias on the opposite side of the PCB. It can be fairly small gauge and doesn't need to be insulated, unless there is a possibility it could short.

If you are only using through parts, then use can put all of the traces on the bottom, and components on the top, in a traditional component side (top), solder side (bottom) scenario. In this case the jumpers I referred to will show up on top, along with the components.

Here's an example; note the red and green jumpers: 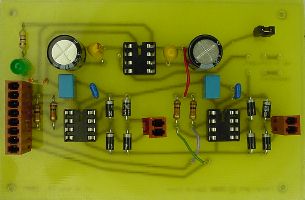 However if any of the parts are surface mount, including the Bluetooth module in your case, then you have two choices. One is to keep the same component side/solder side as before, except put all of your surface mount components on the bottom where the traces are, since they don't go through the board. In this case the jumpers I referred to will still show up on top, along with the through-hole components.components.

If you can't do that for some reason, the traces need to be on the top along with the all of the components so you can solder to the surface mount components. This will make it harder to solder the through hole components, because you will have to do it on the top side since there will be no pad on the bottom. In this case the jumpers I referred to will show up on the bottom. But this is by far a less ideal situation.

Single or Double sided PCB? It all depends.

Single-sided PCB layouts tend to be more difficult to route but it might be worth the effort. There are many reasons why you would choose to put that effort in:

1) You are a hobbyist making boards at home. Producing a single-sided PCB at home is much easier than doing double-sided.

2) You are a manufacturer trying to keep your costs down. Having single-sided PCBs made in volume costs less than half of what double-sided boards cost.

I'm part of a small company that has been in the business of designing and building custom industrial electronics since 1984. We used to make our own prototype PCBs in-house up until about 15 years ago or so. Generally speaking, it would take between 1 to 2 days to produce up to 50 or 60 boards: cutting the board, cleaning, sensitising with photo-resist, expose, develop, etch, strip, drill.

We tried to keep the layouts single-sided if possible. It was just so much easier than making double-sided boards.

Fast forward to today and things are somewhat different. We have a lot of customers who purchase board-level products from us in quantities ranging from perhaps 50 per year all the way up to 11 or 12 thousand pcs per year. Our prototype boards come from AP Circuits in Calgary, AB, Canada. Relatively expensive but we get the boards 2 days after we send in the Gerber files.

With APC, there isn't any cost difference between a single or double sided PCB. They treat all boards as if they were double-sided and that's that.

Production boards are an entirely different story. We now have almost all of our production-quantity bare boards manufactured in China. It took a long time to find and qualify our PCB vendors - quality is extremely important to us and to our customers and there are a LOT of PCB suppliers who make PCBs that are not consistently high-quality.

As a result, almost all of the HVAC controls that we build use single-sided circuit boards. Our customers are always trying to get us to reduce cost wherever possible while still maintaining maximum quality.

And these boards ARE reliable. There are hundreds of thousands of our board-level products in use all over the world - somewhere between 50% to 75% are single-sided boards. The extra few days of layout design time that it took to make the layout work on a single-sided board was well worth the effort.

Yes you can use single sided PCB for that if you are making it by hands , that is drawing the circuit on copper board and using FECL3 and stuff .As mentioned by people above it is difficult to apply similar techniques to make a two sided PCB.

Professional PCBs are made by machines are not as simple as you indicated so one reason to use a double sided PCB is to simplify the process called routing (connecting components with copper). When you have alot of components on the PCB then the possibility of two wires (nets) short circuiting each other becomes high . So to avoid such complication remaining routing is done on the other layer , normally the bottom , which ensures a successful pcb.

There are many pros and cons when designing 2 and multi layer. Consider the following points

Regarding your specific doubt of using 2 layers when using an IC - its not a hard and fast rule. It mainly depends on the package and the peripherals(of the microcontroller) you need. As the complexity of the MCU increases its only available in SMDs. But the lower PICs and 8051s do come in thru holes (and so many others).

Regarding your 2nd doubt of having many add ons. Again its not a thumb rule. Of course when you have many such add ons they will need more power.- If you are supplying them via your board you must ensure that your board can do it. This means you need sufficiently thick Vcc and GND tracks (GND and Vcc pours are better). If you cannot change board size and if board size is limiting your putting thicker tracks, then its better to go for 2 layers and routing Vcc and GND via the bottom layer.

Clearly too late for OP's class project, but for anyone else in a similar situation, I'd recommend single sided with jumpers. If all jumpers are parallel to each other and mostly perpendicular to traces on the copper cladding, if you solder well, and if the circuit does what it should, you should get decent marks for it. Similar single sided through hole construction is still fairly common in consumer goods where size isn't a constraint.