Preventing Arduino from getting lightning strikes and protecting it

I want to use an Arduino as a weather station and I want to put it high up in a tree. It should be independent and powered by solar panels. This is where the problem starts.

Lightning strikes occur pretty often in my area, and I assume the lightning would hit the Arduino and its components before it would hit any other tree.

By the fact you're using an Arduino I suspect your project is not done in a professional framework, but it is some hobby or research project, i.e. something with relatively low budget. Please, correct me if my assumption is wrong, because I'll start from there in my answer.

In these conditions, I fear the answer is no, you cannot protect your weather station from direct lightning strikes, unless you spend much more money than the cost of the entire project.

That's because lightnings are extremely nasty beasts (much more than one could imagine!), and to justify my claim I'll cite some sources from the Internet below.

First of all, for the public at large, a brief introduction to what lightning are by an expert in that subject. And here is a more comprehensive scientific article on the subject.

Let's get a bit more technical and tackle lightning protection: here is "How to Protect Your House and Its Contents from Lightning", a guide for technicians by IEEE. Some excerpts (emphasis mine):

Lightning is a natural phenomenon caused by separation of electrical positive and negative charges by atmospheric processes. When the separated charge gets very large, the air between the positive and negative regions breaks down in a giant spark (an intra-cloud stroke), or a charged region breaks down to ground (a cloud- ground stroke). The resulting current flow ionizes and heats the air along the path to ~30,000 K (54,000 ° F). The ionized air glows brightly (the lightning), and the sudden increase in temperature expands the channel and nearby air, creating a pressure wave that makes the thunder.

Most lightning properties are beyond normal human experience. The cloud-to- ground voltages leading to the discharge are tens of millions volts or more. The peak discharge currents in each stroke vary from several thousand amperes to 200,000 A or more. The current rises to these values in only a few millionths of a second (microsecond), and the major part of each stroke usually lasts much less than a thousandth of a second. Each visible event, referred to as a flash, typically consists of 1–6 (or more) individual strokes, separated by <0.1 second.

That guide focuses on household protections, so it is not aimed at your use case. There is this further guide which may be more relevant: Lightning Protection, Grounding, Bonding, Shielding, and Surge Protection Requirements, from the US National Weather Service. It is a rather technical manual on the protection requirements for weather stations. Not a smooth reading, but you'll get a glimpse of the difficulties you face when trying to protect sensitive equipments and installations out on the field. Some excerpts:

When landlines are directly connected to externally mounted electronic equipment, the landline SPD specified in this document for both facility and electronic equipment entrances will be provided at the electronic equipment entrance. This combined protection will provide separate high- and low-energy components with a single grounding path. The high-energy suppression components will be grounded directly to the EES. This connection should be accomplished with a minimum No. 4 AWG insulated copper conductor. The low-energy suppression component will be grounded to the reference ground used by the circuit to which the landline is connected, or to the electronic multipoint ground system. The grounding conductors for the high- and low-energy components should be of minimum length and routed to avoid sharp bends, kinks, or loops. Access should be provided for visual inspection of these suppressors and for their replacement.

The intention of the lightning protection system (LPS) is to provide preferred paths for lightning discharges to enter or leave the earth without causing facility or equipment damage or injury to personnel. The essential components of an LPS are:

b. Roof, bonding, and down (main) conductors

These components act together as a system to dissipate lightning energy. The LPS will meet or exceed the requirements of National Fire Protection Association (NFPA) 780, Standard for the Installation of LP Systems. Materials used for an LPS will follow the lightning protection components selections shown in the UL 96, Lightning Protection Components.

Let's summarize the key points: one big problem is that the lighting strike acts like a current source, not a voltage source (as one may expect): there is some charge that must travel through the objects the bolt meets on its way. Until that charge has traveled to earth and dispersed into the mass of the planet, current will keep flowing, no matter what. To protect things you should provide low-impedance paths to earth for that current, so that only low voltage surge will develop. But that's a hard thing to do: even a meager (for a lighting) 10kA will cause a 10V voltage drop across a 1mΩ (some PCB traces have higher resistance!). That's reasonably safe for a human being, but it's enough to kill sensitive 3.3V or 5V powered ICs instantly!

You may shield a circuit with a Faraday cage, which is an effective countermeasure, but that cage must be massive and of well conductive material, so that such a huge current is presented with 10s of μΩ paths or less! And note that any aperture in the cage can provide paths with higher resistance.

Then there's the problem of the huge EMP (Electro-Magnetic Pulse) generated by the lighting. People think that lightning is static electricity, but that's wrong! The static charges are those on the clouds that are the cause of the lighting. The lighting in itself is a time-varying pulsed current, so it develops harmonics of huge amplitude. Even if you succeeded in shielding your circuit from the conduction currents, there are the induced currents: any aperture in the cage is a path for EM radiation from the EMP, and any PCB trace can act as an antenna inside the cage. Enough energy could be transferred to the circuit and fry it, unless proper countermeasures are taken.

EDIT (after the answer was accepted, to cite an interesting and spot-on source)

I just found this ON semiconductor application note on Transient Overvoltage Protection, which is just on-topic, especially when it describes lightning protection. Some excerpts (emphasis mine):

A severe lightning model has also been created, which gives an indication of the strength which can be expected during worst case conditions at a point very near the strike location. Figure 2 shows this model. Note that continuing current is present at more than one interval, greatly exacerbating the damage which can be expected. A severe strike can be expected to ignite combustible materials. A direct hit by lightning is, of course, a dramatic event, and probably non-recoverable. In fact, the electric field strength of a lightning strike some distance away may be excessive enough to cause catastrophic or latent damage to semiconductor equipment. It is a more realistic venture to try to protect equipment from these nearby strikes than to expect survival from a direct hit. 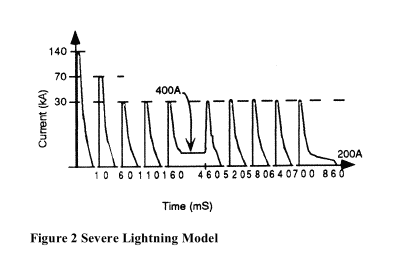 There are few things that can survive a direct lightning hit without damage. Those things are metal structures, like the protectors on the hut. So, you are quite correct (in your comment) that you have to hope it never gets hit. The fact that the tree is still there is a good indication that a lightning strike to a particular tree is a rare event.

What you do need to consider is an indirect strike. These are much more common and happen when lightning strikes nearby. When lightning strikes that hut, a current of thousands of amps is flowing, and any length of metal nearby acts as the secondary winding of a transformer. Hundreds of volts can be developed this way. So, the protections you want to apply are the same as you'd apply for ESD protection. Protection diodes, shielding, and so on. Also, minimize the length of your equipment. Putting the solar panels a meter away connected by wires is asking for trouble. Keep everything together.

Running a "ground wire" is a bad idea, as it lengthens the target for the induced strike, and lightning is so fast that it's like RF--any length of wire is seen as an inductor and the spike just ignores it. The goal is to minimize the voltage that can develop across the equipment itself.

Not the answer you're looking for? Browse other questions tagged arduino solar-cell protection surge-protection lightning or ask your own question.

5
Protecting a tethered floating device from Lightning strikes
1
Opto isolator for an Arduino weather station?
0
What battery and solar panel voltage for Arduino Uno weather station?
0
detection of dc pulse
0
Automatic cut mains power on a thunderstorm
1
Can lightning damage electronics via a ground connection?
10
Why are modern telephone lightning arrestors less prone to (rectification) RFI problems than old ones?
3
Protecting circuit input against lightning - how to put all the pieces together?
0
Protecting RPi against lightning and high voltage