How many ohms do you need before you need a resistor?

Okay, I'm rather a bit confused here now. I am trying my first real circuits, for some LED lighting. I tried making a little circuit last night, matching two LEDs in parallel on 4.5v of battery. However I didn't make any accounting of the amperage. I had no resistors in the circuit and the LEDs quite literally exploded, plastic shrapnel flying around the room!

So today, I looked up the formula to figure out how many ohms of resistance you need, picked up some new LEDs and a couple of resistors to try again. Here is what I figured based on my limited knowledge so far...

My new circuit consists of:

I plugged into the formula

This led me to a result of needing 30Ω . So I bought a pack of 15Ω resistor, planning to put them in series in the circuit. Here is the circuit I planned:

I felt pretty confident in my calculations. When I put it all on the breadboard, I forgot to put the resistors in though before connecting the power source. As I connected the power source, I saw the LEDs light up, and realized I'd forgotten the resistors. I expected another spray of plastic shrapnel. HOWEVER - the LEDs just lit as expected, and there was no explosion. I then put in the resistors, and it did not change the output of the circuit at all. The LEDs still lit, and did not seem any dimmer for the resistors being there.

You said that in the first test, where the LEDs blew up, you used a 4.5 volt battery. That would force MUCH more current through the LEDs than the 3 volts you used in your second test.

The 3 volt test would still be forcing much more current through the LEDs than their maximum rating, and may greatly shorten their life.

What you should do is: 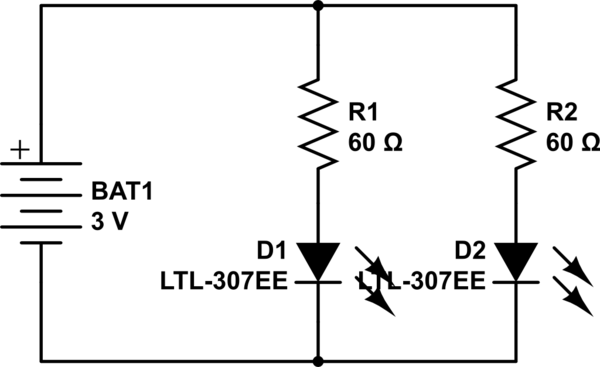 Since LEDs are not guaranteed to have identical forward voltages, if you connect two LEDs in parallel, with a common series resistor, one LED will draw more current that the other, so will get a little warmer, so its forward voltage will drop slightly, making it draw still more current.... which may cause one LED to be destroyed (not too likely) or one LED to be significantly brighter than the other.

There might be times when your LEDs survive even if you give them more voltage or current than they are rated for.However,this will most likely damage them.It is best that you stick to their respective specs.I destroyed a few LEDs with a small bang in the past,connecting them directly to a 9 volt battery without adding something in between.I would never expect LEDs like those you used to be fine in my configuration.As the others stated,it's not recommended to put LEDs in parallel with a single resistor,not if they are not the same.I connected two like that in the past and one was bright and the other was completely off,while the goal was to have them both light up.

A battery has an internal resistance, and in this case that resistance was enough to limit the current to a "safe" value. But that was just luck.

Not the answer you're looking for? Browse other questions tagged led current resistors ohms or ask your own question.

152
Why exactly can't a single resistor be used for many parallel LEDs?

10
Reducing number of resistors
3
Calculating LED current flow in a parallel circuit
0
9v battery to parallel 3v LEDs - burnout
0
How does the size of a resistor connected to an input of a NOR gate affect it?
4
Is there any pitfall to using resistors in series AND parallel for an LED array?
1
Not understanding why my resistor R4 for the circuit schematic is reading 35k ohms on a multimeter when its meant to be 47k ohms?
2
How do I make a 6 LEDs Parallel circuit
2
Building DIY TrackIR, need wiring help
1
LED Lighting not working