Why do cables have multiple grounds?

Many cables have multiple grounds. Why?

For example, according to Wikipedia:

The SATA standard defines a data cable with seven conductors (3 grounds and 4 active data lines in two pairs) and 8 mm wide wafer connectors on each end.

In general (not specific to SATA), why do cables need multiple grounds? Are there different reasons for multiple grounds when cables are used to transmit data vs. power?

From what I've read, it sounds like one of the main reasons to have multiple grounds is to lower impedance... but why is low impedance so critical for a ground line?

It all comes down to impedance of the data lines. Basically the lines have a low resistance, but this is very different from what we term impedance in this regard.

Basically at high frequencies such as used in SATA and USB3.0 for example (and in fact really anything more than around 100+MHz) the electrical signals travelling down the cable start behaving more like electromagnetic waves being guided by the cable (transmission line). The parasitic capacitance and inductance act together to form an impedance to the signal. Because of the nature of waves discontinuities tend to cause reflections - for example if you fire a laser at an angle into a pane of glass, you can see that the laser beam has been reflected at points where the density changes (like from air to glass). In short this is basically what happens with high frequency signals (if you think about it a 2.5GHz signal from USB3.0 is basically the same as the RF band used by WiFi).

As an RF signal in a cable is travelling along, if it hits a mismatch in the impedance of the transmission line it is travelling in, some of the signal will reflect back towards the source. This is very bad as it means there is a loss in power (attenuation of the signal) and you can get distortion due to reflections bouncing back and fourth in the cable. To ensure this doesn't happen (or at least reduce the likelihood), we design all cabling, terminations, drivers, electronics, in that particular circuit to have the same characteristic impedance thus allowing the signal to travel from the driver to the receiver with minimal reflection.

To achieve this characteristic impedance we need two things, firstly the inductance in the cable, and secondly the capacitance between the cable and ground. These each present a complex impedance of opposite polarity and thus come together to form a real impedance - what value depends on the technology e.g. 100Ohm differential impedance is common, and 50Ohm single ended impedance. As such you need the wire and the ground to set up this impedance. Now you can't just have any old bit of ground wire, you need it set up so that the electric fields between the cables and the ground result in the correct capacitance. Furthermore, if you have a differential signal you need both the impedance of each wire as well as the differential impedance (between the two signal wires) to be a specific value.

In a PCB layout you have different technologies, but the predominant one is called "Microstrip". Basically between the ground plane and the PCB you have the PCB material which has dielectric properties thus forming the required capacitance. You then select the width of the trace to get the correct inductance to create your characteristic impedance.

For cables there are different methods of doing it. One example is Co-ax, where each signal wire has its own shield which acts as the ground plane. Due to symmetry it is very easy to work out the impedance of the cable and design something with the correct dimensions. However Co-ax is bulky, and it is hard to make very small coax cable, especially when you move to differential signals (twinax is a pain!). So instead what they do is use two cables (sometimes in a twisted pair arrangement for maximum coupling between the pairs) to carry your differential signal. But as has been mentioned in some applications you need more, you need the characteristic impedance to the ground as well as between the cables. So you need to also route a ground plane for the pair. There are different ways of doing this, but in the end it basically results in the need for carefully placed ground wires to act as the ground plane.

In SATA specifically they arrange the grounds to be either side of each signal pair (the one in the middle is shared) and by careful planning they reach the characteristic impedance.

Hopefully the about is understandable, it's actually quite a complex and vast field in electronic engineering.

Interference from magnetic fields depends on the loop area between the signal wire and the ground wire where its return current flows. If there is a single ground in a 1" wide ribbon cable, the farthest signal lines are at least 1/2" away, and maybe nearly 1" away (not an uncommon design in low-speed digital systems). That gives a loop area of 1/2" x L through which stray magnetic signals can couple into the signal line. By placing multiple ground lines, you can reduce the maximum separation between signal lines and ground, reduce the loop area, and so reduce magnetic interference.

Similarly, the magnetic cross-talk between two signals depends on the overlap in the loops from the signals to the ground lines. When two signal wires share a ground wire in a ribbon cable (for example), their loops will overlap significantly. 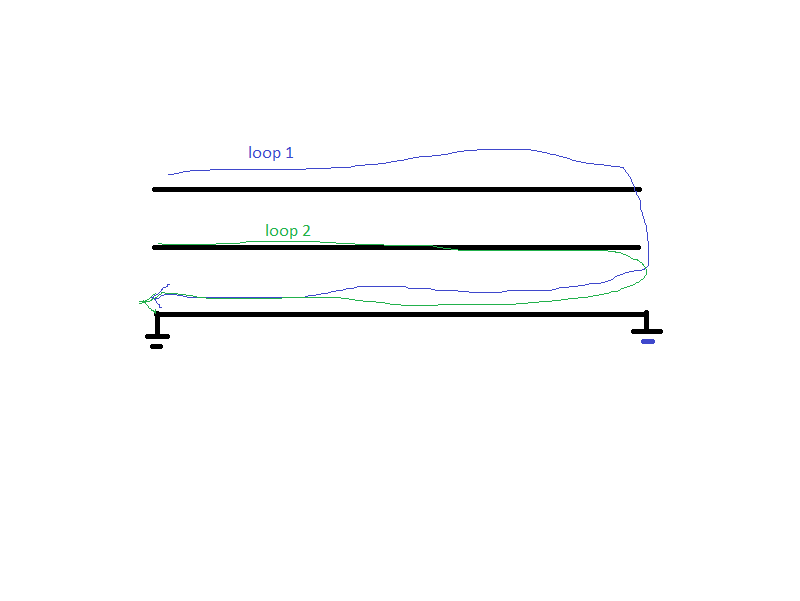 This essentially forms a very long, skinny, air-core transformer that couples signals from one line into the other. Again, by increasing the number of ground wires, you can minimize the area of these overlapping loops, or even eliminate them, reducing cross-talk between your signals.

Both of these effects will often justify using multiple grounds, even when the signal frequencies are low enough to not worry about the transmission line effects described in another answer.

High-speed data lines, as well as most analog lines, usually operate differentially to avoid interference (both internal and external).

This means either that the line is matched for impedance or that the circuit it is used for is isolated from ground interference. In practical terms, both of these mean less noise and interference.

See for example the typical Ethernet cable (UTP is most common) with many pairs of twisted wires. Twisted wires mean that they will be almost always the same distance from each other. Another example is some VHF/UHF TV antennae, which usually has a flat cable with one wire in each side. That flat cable is made that way to keep the distance between the wires constant. That means constant impedance in the wire, which means less reflections, less change in EM wave speed (and each frequency tend to lag in different speeds, causing distortion), less smoothing of the signal and less interference from outside sources (wires acting like antennae by themselves).

Those are specially important for high-speed and analog signals, where information can be disrupted with very small interferences.

In addition to the factors mentioned in other answers, ribbon cables may have significant parasitic capacitance between adjacent wires. In the example below, the three generators are trying to outputting square waves on the wires of the cable (which has a ground at the end) but the resulting waveforms are sufficiently nasty that a device connected to NODE2 might see some spurious transitions. If the cable had included grounds between every wire, that might have increased capacitive loading (thus causing waveforms to be a little more "rounded", but would have essentially eliminated the capacitive crosstalk. 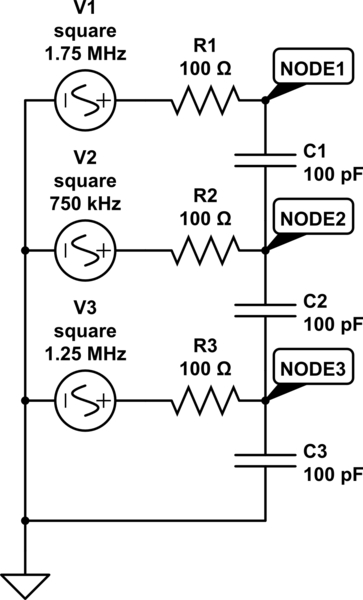 Not the answer you're looking for? Browse other questions tagged impedance cables ribbon-cable or ask your own question.

8
Why do AC-to-DC adapters have long cables on both ends?
7
Why would high-voltage cables have semiconductive layers in their design?
2
How to shield multiple flat (ribbon) cables properly?
49
Why are copper cables round?
4
Why do cables typically have copper center core when current flows around the edge?
5
Routing USB, DVI and Ethernet signals on a large PCB vs using long cables
2
Do all USB cables have power lines?