Can I connect multiple speaker boxes to a single amplifier output? [closed]

I've seen arrays of passive speaker boxes (high output passive professional PA speakers) that were connected to each other and only the last (or first) one was connected to the power amplifier (a very high power amplifier in that case). The speaker cabiners had the sockets labelled IN and OUT, which means they had been designed for this sort of connection.

The question: I wonder whether the same setup - multiple speakers hooked on single amp output - is possible with standard consumer home audio systems (as my Cantons dont't have the OUT connectors). I'm only interested in the technical aspects, not in how the fidelity may degrade (I only use coat hangers to connect my speakers).

I'm not very well educated in this field, so I'd like to provide some of reasoning I'd already done, in case there is something to correct in there, too. I understand that one should never connect a speaker box of impedance lower than that for which the amplifier is designed (so you can connect 8 Ohm speaker to 4 Ohm rated amp but not the other way around). I'd count that impedance behaves quite like resistance in that, that if I connect the speakers in parallel, I'd end up with half total impedance and would need a 4 Ohm rated amp for a pair of 8 Ohm rated speakers. With three of them, I'd be down to 2,5 Ohm rated amp for 8 Ohm speaker boxes. With speakers connected in series, I'd need an amp power rated roughly equal to the speaker power ratings combined but won't need to worry about the impedance (as long as the speakers are same or higher impedance than amp rating). For simplicity, I use sets of same speakers (make, model, power rating, impedance) here because that is what interests me. My amps are D-class.

If you are connecting up more than one speaker to an amplifier, then you can create a network of parallel and series speaker connections to keep the impedance equal to or higher than the amplifier output. 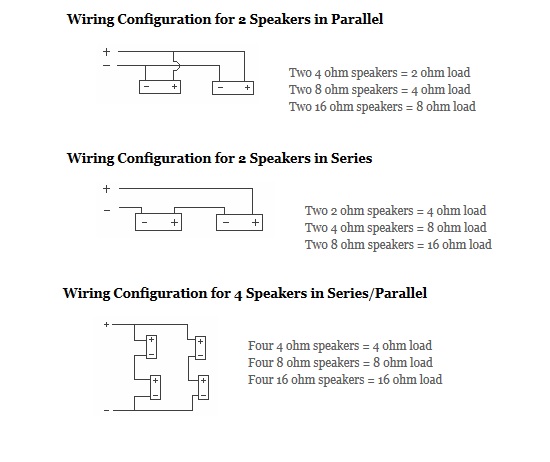 In large installations, such as a sports arena where there may be hundreds of speakers, that's not what they do. Instead they use a "high-impedance constant voltage" distribution scheme:

Another advantage of this type of system, is the 70.7V line reduces power loss due to cable heating. That's because the speaker cable carries the audio signal as a low current. Therefore you can use smaller-gauge speaker cable or a very long cable.

The disadvantage of this scheme are the extra transformers needed; however it is possible to get both amplifiers (like the one below) and speakers that already included the needed step-up/step-down transfers. 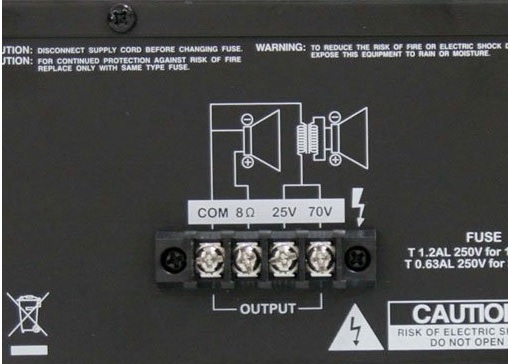 The 25V output shown next to the 70V one is an older standard. You may also see 100V systems.

Not the answer you're looking for? Browse other questions tagged amplifier audio speakers or ask your own question.

0
Use multimeter to find approximate impedance of miswired speaker array?

8
Matching Audio Amplifier with Speaker (Watts Rating/Output)
14
How are speakers matched with audio amplifiers? (avoiding overloading either)
3
home audio: How much current flows through my speaker amplifier's output?
1
How to drive high impedance PA speakers
1
Adding an amplifier to a speaker-level audio output
1
Daisy chaining a headphone amplifier with a speaker amplifier
1
Amplifier and Speaker matching while in Bridged Mono Mode
1
How to check the power output of home amplifier speaker terminals?