It is possible to set Vin(off) voltage for optocoupler. There is explained here:

And in the appnote for TLP290 opto-coupler that can be downloaded from here:

So, Is it possible to set Vin(on) threshold voltage? I need to implement this:

There is no explained in appnote for that opto-coupler. While input signal is 24.0 VAC/VDC. Additional requirement is keeping

While you could implement a "clever" passive circuit that did what you want as well as possible, it would be at the mercy of device parameter variations AND would depend on what you define as "off" and "on" at the output. Current transfer ratio varies by a factor of 2:1 for the "rank BLL" part and by 8, 3, 3, 4 for the other variants.

Using a comparator or similar circuit which can be designed to switch ar desired voltages allows far greater control.

Yes, you can do something like put a couple series 6.2V zener diodes and a 6.8K resistor. Also put a 10K resistor across the opto input. 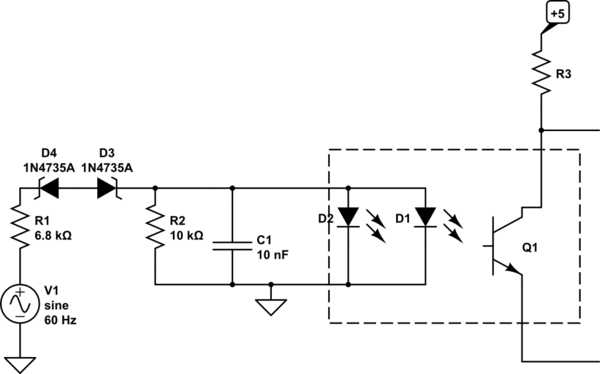 The current will not be very high, so R3 has to be pretty high considering the low CTR of this part. Maybe ~20-30K.