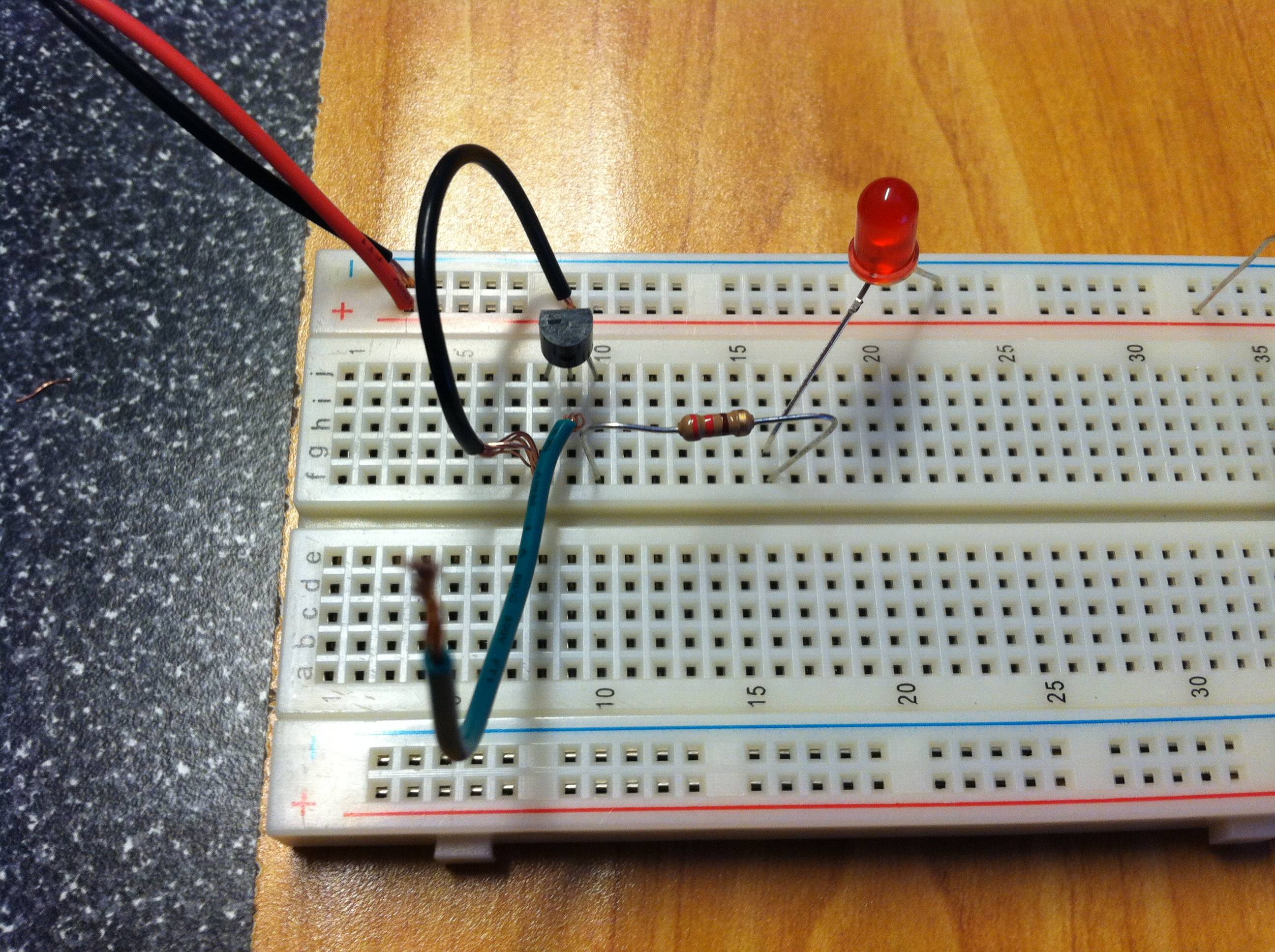 Here's a picture of what we implemented in a breadboard. There's one difference from the above circuit: the switch is not actually complete. We just have a single wire connected to the n-MOSFET's gate. So this is what we actually have in the breadboard.

As far as we can tell, from our limited electrical engineering experience, the LED should never be on, since there is no connection from the +5V power to the transistor's gate; the transistor should not let any current through. However, there were two interesting things: first, the LED turned on as soon as we powered on the circuit, even before we connected the transistor's gate to power. Also, whenever we touch/tap the wire connected to the gate (labeled by "??" in the circuit), the LED randomly switches between three different levels of brightness (on, medium, off), and will even "stick" at a brightness setting, even between power cycles of the entire circuit. The single transistor appears to act as a flip-flop!

So, the question is: why does touching the unconnected wire change the LED's state?

And, secondarily, how is the LED on, even if the transistor has no voltage source attached to the gate?

A floating gate has a voltage. Any wire has a voltage. Until you put it in reference to something else, that voltage can be anything. Don't expect it to be 0V or any other known voltage.

That gate also has a capacitance. Your body is a capacitance. Every time you touch that gate, you're connecting two capacitors and a charge balance will occur. This will alter the voltage on the gate. Ergo, you've created a simple transistor capacitor memory scheme not terribly different than DRAM. Pretty nifty huh?

I'm surprised a little that the brightness remains the same between power cycles, but maybe that's attributable to having a high quality mosfet with a high gate impedance?

Lastly, although this is a great lesson, don't design a circuit like this with a floating node expecting it to be a specific voltage.

Not the answer you're looking for? Browse other questions tagged voltage transistors mosfet ground or ask your own question.

1
How not to waste power with digital inputs?

0
problem with LED Matrix circuit
1
Why doesn't my MOSFET switch off?
0
How to build a sequential logic circuit with transistors on a breadboard
0
2N7000 behaviour explanation
0
Transistor in the NOT Gate
0
Damaged TPL7407LA Transistor Array (*Updated With Scope Testing Images*)
0
2N7000 driver circuit Raspberry Pi
2
2N7000 NMOS only switches properly when gate and source is connected with 1MΩ
1
Problem with mosfet driver circuit/switching
0
Using one Mosfet to control the gate pin of another Mosfet