Why doesn't this mosfet saturate in a configuration and not the other one? [duplicate]

I am playing around with Mosfet specifically irf 540.According to the datasheet ,Vgs is about 10 volt.I added 2 resistors to 2 different circuits to see if there is a difference in the component's saturation. I applied then 3 volt to both gates .Surprinsingly the first circuit saturated and the other didn't.I have got then serveral questions:

Here is a schematic of my simple circuit: 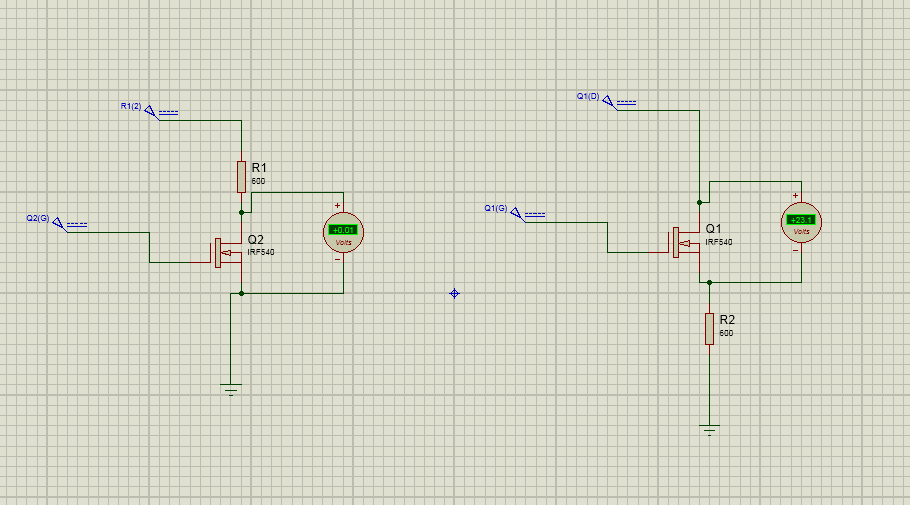 A real IRF540 has a Vgs(th) of 2V to 4V, so its quite possible that it would start conducting at the lower end of that range.
Its also quite possible that whoever typed value into the sim model you're using chose the low end of the range. Vgs of 10V is only an example given to show an Rds(on) spec to try to sell the part.

So, with your relatively high value of R1, seeing the IRF540 saturate in your 1st circuit is not unexpected considering its possible Vgs(th) of 2V.
In circuit 2, as soon as the IRF begins to conduct the voltage across R2 will rise leading to Vgs no longer being the 3V you applied - consequently preventing the IRF from ever saturating.

The resistor represents your load, so no additional resistor is necessary.

Circuit 1 is the configuration normally used when you want the IRF to behave as a switch, because you can make it saturate with a voltage lower then your supply.

0
How to reduce the voltage dropped in a mosfet used as a switch?

1
Why do most N Channel MOSFET Circuits have the Source Pin tied to ground? + Circuit Question
1
Why doesn't my MOSFET switch off?
0
MOSFET saturation case?
2
What will be the value of saturation current in this series NMOS/PMOS circuit?
0
How to identify which transistor is in active region and which one is in saturation?
0
MOSFET goes into saturation mode much later
1
N-MOSFET Gate to Drain short circuit configuration and Vgs
1
Why is the output current not equal to the input current in this current mirroring circuit?