what are the possibilities for Op amp's power supplies?

I am looking for a way to remap a voltage between 0..24 volts to 0..5 volts in order to read this voltage in a microcontroller ADC.For that ,I am intending to use an operational amplifier as an attenuator.Assuming that i have read several posts that couldn't solve my problem i have to ask:

Why you need -ve supply, since your voltage range is in between 0 to 24 volt, you can connect the -ve supply of the op-amp to GND. -ve supply is only required if the input signal to op-amp is -ve.

Why can't you proceed with a voltage divider solution. Here you can set the resistor in such a way that the output of voltage divider sets to 5V or little lesser(4.75V) when the voltage is 24V as you mentioned.

Something similar to shown below 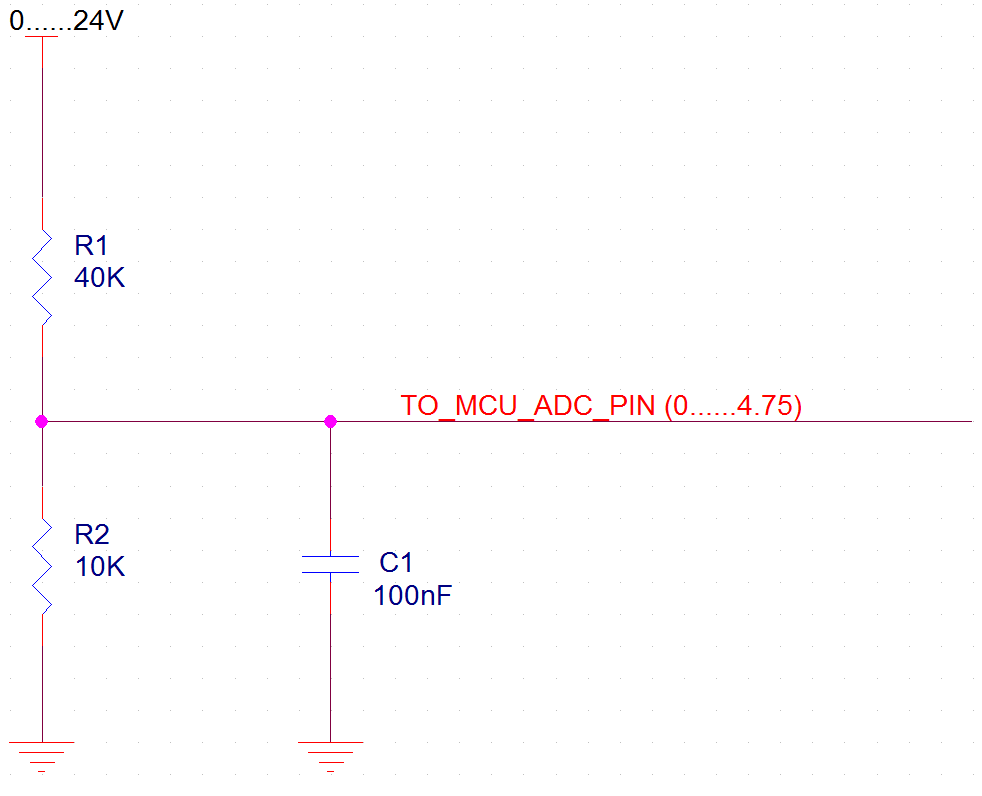 All you need to convert 0-24 V to 0-5 volts is two resistors. The first resistor (R1) is in series with the input, and the second (R2) connects after that to ground. This is such a common construct it has it's own name, which is "voltage divider". Look that up, even here on this site, and you should find lots of info.

If the first resistor has 4x the resistance of the second, then the divider will divide by 5 (has a gain of 0.2). That allows the 0-5 V output to represent 0-25 V input.

The divide ratio defines the ratio between the two resistors. Since there are two resistor, you still have one degree of freedom left. Two possibilities for nailing this down is to consider the input impedance or the output impedance. Let's say the A/D wants to be driven by no more than 10 kΩ. The impedance driving the A/D input is the parallel combination of R1 and R2. A easy way to get that is to make R2 10 kΩ, then R1 in parallel with it will make the output impedance it bit lower, giving you some margin.

Not the answer you're looking for? Browse other questions tagged operational-amplifier dc-dc-converter or ask your own question.

1
Op-Amp comparator or amplifier?
1
Op-amp - dual to Single supply conversion to avoid floating of input signal?
1
OpAmp: inverting and non-inverting amplifier both amplify the signal, how to know which one to use?
0
Op-Amp inputs are sinking too much current in comparator mode
0
How do I wire an op amp to measure the difference between two solar panels?
6
Why would I run a rail-to-rail input opamp with its inputs at the rail even if higher voltage supplies are available
0
Explain adjustable 4A regulator
6
Basic question regarding op-amp output voltage
1
Op Amp voltage output without source connection