I have been trying to control a voice coil actuator with PWM input, but i have the following problems and would like you to correct or point me in new directions.

I have an arduino which outputs PWM voltage. As i only have a single power supply and PWM is always positive to ground i figured i would just use a voltage divider op amp(12v->+6v;-6v) to feed the TL062(which i happen to have in handy and has nice rail2rail swing, i think).The impedance of the coil is 12 ohm.

The op amp voltage divider is done with only 2 equal resistors in inverter mode. Regarding the driver op amp TL062,I am planning it as inverter dc coupled but i am not sure. I am also not sure what is Vs in the equation but i assumed 5 because of the max PWM voltage(i really don't know if this is right). The problem is i can't get my circuit to work with the parameters i have set. Which are

I have taken the equations and theory from Link to Google PDF viewer the section about DC coupled inverted amplifier.

You are on the right track but need a clearer understanding of the amplification needed and of what you will need to provide the power level you need. You need up to 0.5A or 1 A in the inductor depending on how you drive it - only special (very) high power opamps can do this directly..

If you were trying to amplify an analog signal whose waveform needed to be accurately reproduced your general concepts re amplification would be appropriate.

However, PWM is a "rail to rail" square wave signal. To convert from 0/5 to +/- 6 it is only necessary that the output be high when the input is high and low when the input is low. (Or equally validly, inverted so that the output is low when input is high and high when low). The amplifier (or comparator) can have notionally infinite "gain" - the output will only reach the high or low rail no matter how much gain you use and you generally will get faster response and more certain square wave output by using very high gain.

Shown below is the basic inverting amplifier circuit diagram from the datasheet that you referenced. Gain is 10 as shown here (10k/1k), If you remove the 10k and short-circuit the 1k you have a basic comparator. You can use an opamp for this purpose but a comparator is dedicated to the task - it's essentially an opamp that is optimised for fast rail to rail transitions. You can use your TL062 for this or a purpose built comparator IC. You could instead replace the opamp with a simple 1 transistor amplifier stage, as shown below. 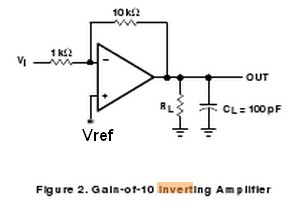 Once you have adequate voltage swing you need to provide a means of delivering adequate current. In the top circuit shown below, Q3 and Q4 mirror the voltage at point X (less a Vbe drop) but provide a high current output capability in the process. In the top diagram point "X" is driven by Q1 which in turn is driven by Vin - from the Arduino in this case. If you wish to use an op amp then the lower circuit is used to drive point X in place of the circuitry associated with Q1. As drawn the transistor based circuit is non inverting. This can be altered if inverting PWM is desired. The op amp version does not have inverting and non inverting inputs marked on the op amp. These may be assigned as desired to produce inverting or non-inverting drive. (Vin to noninverting (+) input and inverting input to Vref to get non-inverting PWM drive.

I can refine this answer and provide extra comments if interest is shown.

In the lower opamp circuit the lower horizontal line is ground (as in eg +5/gnd) and the 10k does join to ground.

As shown here the inductor is driven with +/- 6V relative to ground. If you want +/- 12V drive then you can use two of the output drivers driven by inverting and non inverting feeds with the inductor connected between the two outputs. This becomes a full bridge or "H bridge" driver. 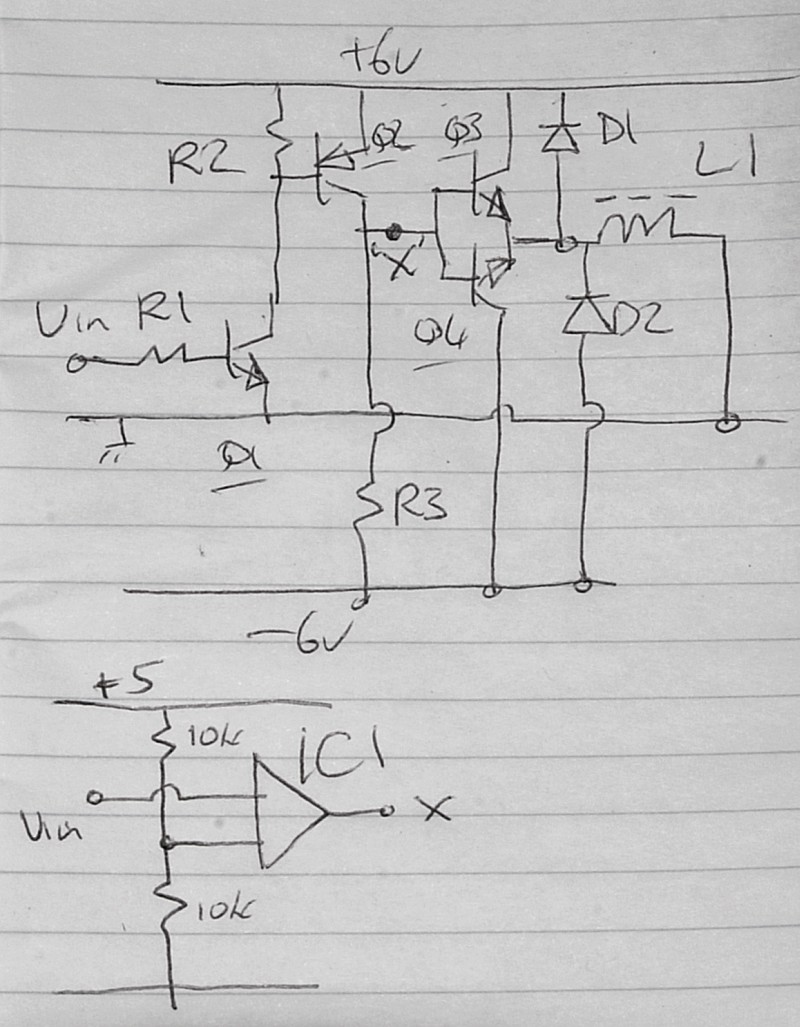 Inductive energy recovery: D1, D2 provide paths for inductive current when both Q3 and Q4 ar off or partially off. Diodes need to be able to handle peak inductor current and have a switching speed fast enough to deal with any spikes on PWM edges. Leaving these out may result in destruction o Q3, Q4.

First off, you must choose a rail-to-rail opamp. It must accept input swing up to the supply, and the output should be able to swing up te supply. There are plenty of them: for example the LT1801.

All voltages are respect ground.

At this point, it is much like a high school problem. Since the PWM swings always from 0 to +5, you have only two cases: when Vni is zero, you want Vout equal -6V, and when Vni is +5, Vout must be +6V.

You may put all together so to have a two-simultaneous equations, with two variables: K and Vs. If I didn't mistake, that leads to:

So, this circuit will amplify the PWM square wave to a -6..+6 square wave. Same frequency and same duty-cycle. However, you should choose a good opamp having a slew-rate high enough to follow the PWM shape.

It misses the coil driving. You might drive the coil almost directly, I mean without any low-pass filter, but that's depending on the coil, on what you looking for and other factors. I don't think you may drive the coil without any current amplifier.

Not the answer you're looking for? Browse other questions tagged operational-amplifier actuator bias or ask your own question.

4
Can I use a subwoofer as a linear actuator?
1
summing amplifier
0
Why I can't get twice the input voltage from a double voltage circuit and how I can solve this?
2
MOSFET voltage follower for non-inverting op-amp biasing
1
To amplify the output of a linear Hall Effect device for the purpose of driving a voice coil
0
Simple inverting op-amp problem
1
How to know the right amp to power a 12V actuator?
4
Volume Control Solutions
0
Attenuator with strong bias