I'm building a laser target with photoresistors and a 90FPS camera (which will probably become CPU bottle-necked) and when yesterday I went to shopping I just saw a barcode scanner and begun thinking: "Well, these things are relatively cheap in terms of hardware(ignoring the software), are bloody fast, and are excellent detecting patterns of black and white when illuminated by laser light", then I recalled that mouse sensors work the same way, and questioned myself if there is a much simpler and more effective way of building the target with those.

Can one of such sensors be used to detect red laser light hitting a white surface (with a blackish circle on the middle) a few centimeters away? Since they take hundreds/thousands of frames each second, I'll assume that they can detect 10 laser pulses in 15~25ms, correct?

How hard is to use one of those for DIY projects?

Since you are electric engineers (and know the stuff) is there any other way to do it? A camera+photoresitors will probably work (working on it), but it feels hackish and is not in compliance with the official sport regulations (unable to tell if its one solid shot or 10 short pulses at every shot). How would you do it?

EDIT: Forgot some specs. This is a target that can be used in competition (Modern Pentathlon): 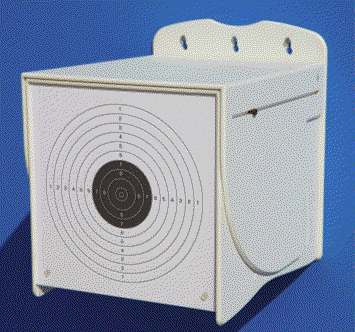 Its sides are opaque and the front is only slightly opaque so the light can go through. It is about 20 by 20cm, and 25 thick, but some simpler targets are as slim as 5cm. The lasers have a 630nm to 650nm wave, 3.5mW intensity, and the maximum of 1cm dispersion at 10meters. The target needs to have the maximum of 100ms reaction time, so photo-resistors should be enough, and it needs to tell the location of the shot with 0.5mm precision at the very edge of the black circle (to distinguish an in from an out), some separation should do the trick.

Can you guys tell what is that target made of just by looking at it? It is hugely overpriced (800€-950$), since the low end targets (that only distinguish in from out, and give no position) are made with a diode and a controller cost almost 300€(~350$). I'll assume that the real cost is about 200€, what can be done with 200€ worth of electric material?

This is all speculation because I am not familiar with the device in question, and I am actually not an electronic engineer either. But it does not seem too difficult in principle.

To detect 1.5 ms pulses, practically any photodiode will do that can detect red light with reasonable efficiency. The bandwidth only needs to be 10 kHz or so. You can even use a phototransistor for a larger signal level without having to use a separate amplifier. (Although, I would not suggest using a photoresistor. They are more expensive than photodiodes and phototransistors, and have poor sensitivity and response time.) Detecting the pulse train does not need to be spatially resolved--either it is detected and the target is hit somewhere (which will prompt a position readout), or it is not and there was no shot or a miss. The spatial resolution can be accomplished separately if necessary.

You can do this in two ways, as I see it. Either you can construct the target so that its sections lead to a signal on a corresponding photodiode, or you can use a camera.

You could have the front part be a plastic molding with annular light guides for each of the concentric rings. A hit anywhere on the ring would then propagate through the light guide and be detectable by a suitably placed photodiode or phototransistor. If a hit falls across two different rings, the relative intensity falling on each ring can be used to give a more precise location estimate. In this case, because the light is confined to the light guide, one would have to make arrangements for all guides to also be connected to the pulse detection circuit. Of course it is possible to do the pulse detection separately on each ring, but duplicating this function does not seem to be necessary to the design.

Another approach is to use a camera to locate the shot after having detected it in another fashion. You do not need to have a high-frame-rate camera to accomplish this, because the frame rate does not define the shortest event you can detect, but rather the shortest time that you can measure between any two successive events. I sometimes use an ordinary CCTV camera to observe (infrared, thus invisible) laser radiation when I align pulsed lasers. These pulses are not milliseconds, but nanoseconds in duration. There is no problem detecting them provided that they fall within the frame integration time of the camera.

However, (most) cameras do not integrate continuously. Rather they integrate for a fixed period, and then read out, during which they are not capable of detecting anything. In order to avoid the small chance of missing a shot due to it falling within the readout period, it would be advisable to have two separate cameras, where the integration time of one would overlap the readout time of the other. With this method you could also accomplish a limited form of pulse detection, because the spot would be visible in two successive frames (one from each camera) and then be absent. (Or maybe one or the other camera would miss it, and it would only appear in one frame. Either way, it can still be identified as a pulse.)

Any cameras with frame rate sufficient for your required response time would be suitable. A typical board camera with an M12 lens would probably be quite appropriate. The M12 lens may be preferable over a fully integrated lens for its larger aperture, and thus higher light-gathering ability (hence sensitivity). These are inexpensive and small enough that there is no obvious problem with mounting two of them side by side in the enclosure. The frame rate used in practice should be such that each frame fully contains one shot, but not so long that it would lead to a slow response. So, a frame duration of about 50-100 ms seems reasonable. Having captured the image, one must of course be able to process it to give a position readout. I expect this will be the limiting factor for the response time, but practically speaking, if the readout is given in under a second, it does not strike me as being a problem. You can give feedback (e.g. by making the target flash or sounding a buzzer) as soon as the pulse is detected but before the position is determined, if you prefer an immediate response.

My suspicion is that the deeper (25 cm) target uses a camera, simply because of the practicalities of observing the full target using a camera mounted very close to it. One would need a very short focal length (fish eye) lens to do so, which is either expensive, or introduces a lot of distortion, or possibly both. The thinner (5 cm) target probably does not use a camera, but something more similar to the ring light guide arrangement.

Finally, even though it is not difficult in principle, do not underestimate how long it will take you to make this. I suppose it will be at least some tens of hours unless you are exceptionally well equipped to begin with. At some point, it will be more economical to simply buy the target rather than making it yourself. This fact, and the rather specialized nature of the product and resulting limited size of the market, probably accounts for the high cost of the commercial targets in relation to their likely materials costs.

Not the answer you're looking for? Browse other questions tagged sensor laser time optics laser-diode or ask your own question.

8
Laser related questions
1
How do I build a laser/IR target?
0
How to connect laser with common LD-Anode and PD-Cathode, tied to laser case
1
Making PCB with DVD Writer
1
3.1 volt 400 mA laser driver
2
What are different ways to 'elongate' an electrical pulse?
0
detecting laser using solar cell and band pass filter
0
Laser Diode Coherent OBIS
0
Need a sensor for detecting the presence of someone like a door sensor we have in lifts/elevators
0
Current coupling in self-monitoring laser diodes