I'm creating my first Arduino project and would appreciate some guidance. I am basically trying to re-create a digital scale that will POST to the internet. I am going to be measuring the coffee levels of a coffee pot and updating our intranet with the info. The coffee pot will sit on the scale and at regular intervals the data will be submitted. The maximum weight of a full coffee pot will probably be less than 5 lbs (2.2 kg). Since this project is just for fun, I would prefer that the parts would be inexpensive.

I am a professional web developer, so the programming part will be easy for me. However, I have no experience working with electronics/sensors/micro-controllers. What parts do I need in order to measure these small changes in weight to a relatively lightweight object? Where can I buy them? Where can I learn to wire these parts together? Also, any tutorials you can refer me to would be VERY much appreciated.

Update: Here is the parts list that I've compiled so far:

If you want ease of implementation, value for money, and good accuracy - then a cheap commercial digital "kitchen scales" is worth considering. These are commonly available in 2 kg and 5 kg versions and no doubt other ranges as well. By using a simple lever arrangement you can increase or decrease sensitivity mechanically.

You can buy load cells and instrumentation amplifiers and roll your own, but the ones in some kitchen scales are superb and the cost is liable to be far less than you can buy the parts for new.

Note that a load cell beam CAN be damaged by overloading. The gauges usually are designed to "bottom" shortly past full scale. If you used say a 5kg cell and used it to only say 2kg or 3kg and added your own stops so it never reached full scale then you would completely avoid overload damage.

The best (and in some cases also the cheapest) kitchen scales use a "real" load cell with 4 strain gauges in a bridge plus hopefully a 5th temperature compensating strain gauge (places on the load cell where stress/strain is caused only by temperature changes. The photo below shows a typical load cell used in low cost scales.

Performance of cheap kitchen scales varies from not-overly-marvellous through to unbelievably superb.I bought some 2 kg kitchen scales here a few years ago which were essentially linear to 0.1% across the range and which were temperature immune for practical purposes.

Mine looked very like these. Similar appearance no guarantee. 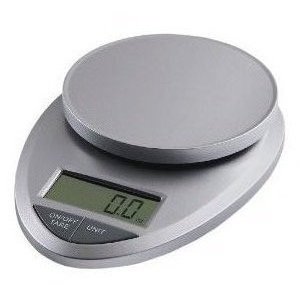 Factors which relate are accuracy, linearity, repeatability and temperature independence. The first 3 are close travelling companions but not identical.

Accuracy checking: Obtain several hundred one and two cent coins. These will probably weigh close to 1.000 gram and 2.000 gram each. If not that then some other fixed mass. This is partially so banks can check amounts by weighing. They are amongst the best value for money calibration wights you can but. Make a few larger test weights by using eg coins to calibrate them. Say 100 200 400 800 gram would be easy. These can be made out of almost anything stable. Even eg plastic screwtop jars with water in - as long as they are airtight.

My scales would track linearly for any number of coins aded or removed and whether removed or added one by one or N at a time. Superb. Some scales are not so good.

Some scales are poorly temperature compensated. Mine can have a hairdrier waved over them on high until they are toasty hot (50C plus) with little of no display deviation. Superb.

I'd get a digital scale from a department store and hook up to it's existing electronics. This solves two problems: getting strain gauges, and building a physical mechanism for transferring the load to them properly. Most of them seem to be produce readings out to half a pound. Between that and some quick calibration, you should be in business.

you'll need a load cell that works with your weight ranges, an arduino, and an wifi or ethernet shield

1
Load cell required with resolution of 1 gram
0
Load Cell DAQ via Arduino Mega
1
USB interface to bluetooth interface for digital scale
2
Pressure/force map (0-5kg) via sensor grid
0
What can I use for temporary wiring harness?
1
Properly source varying negative voltage using Arduino
13
Measure diameter of a ball with Arduino
0
Using 8 half bridge load cells together
0
Different ways or sensors to detect the weight on an object in a system
0
TRT-25 and Arduino Uno