Error in this explanation of instrumentation amplifier?

On this webpage I read an explanation of an instrumentation amplifier: 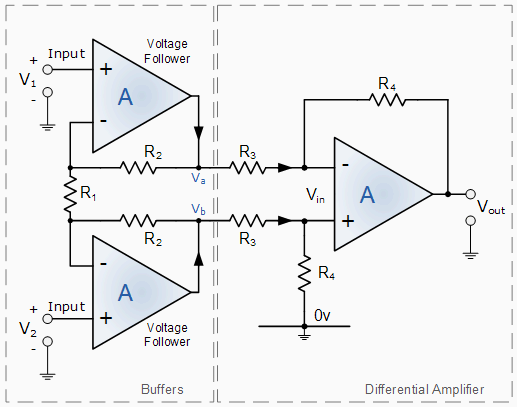 And the input amplifiers are marked "Voltage follower" to illustrate this, but I wonder if this is correct. Part of Vb is added, so Va can't be equal to V1, can it?

You're right, this is wrong. If the output of the buffer amplifier would be equal to \$V_1\$ then there wouldn't be any voltage difference over R2, because the opamp will keep the inverting input at \$V_1\$ as well. So there wouldn't be any current through either R2. Yet there's a voltage difference \$V_2\$ - \$V_1\$ between both inverting inputs, causing a current through R1. Since no current flows in the opamp's inputs this would be a violation of KCL (Kirchhoff's Current Law).
So, the buffer amplifiers are not voltage followers and \$V_a\$ is not equal to \$V_1\$. The equation further on the page also mentions the factor \$\dfrac{R4}{R3}\$ a bit too early. It should read

and since the same current flows through R1:

The factor \$\dfrac{R4}{R3}\$ is the amplification by the differential amplifier stage.

Wrong: Yes, the explanation is incorrect.
(The statement is correct in the special case where Rgain is absent and input stages have unity gain. See next paragraph).

Referring to your diagram 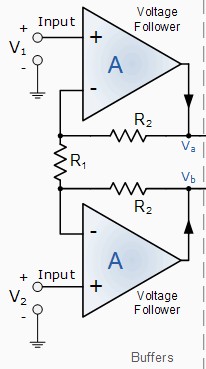 Correct statements would be that

All following circuit references will be to the diagram below. 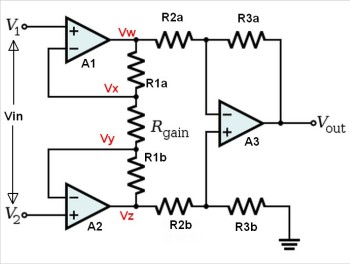 ie Due to the opamp providing negative feedback to drive the difference between its inputs to zero, (V1 = Vx) and (V2 = Vy)

A much better way of drawing the circuit - The amplifier can be much more easily understood intuitively if it is redrawn as shown below (and in smaller size version immediately above). This is done in some instances but usually the version in the original query is used. This is such a good way of showing it that it is strange that it is not used more often. Consider the diagram below.

Use R1 for R1a or R1b as result is symmetrical. 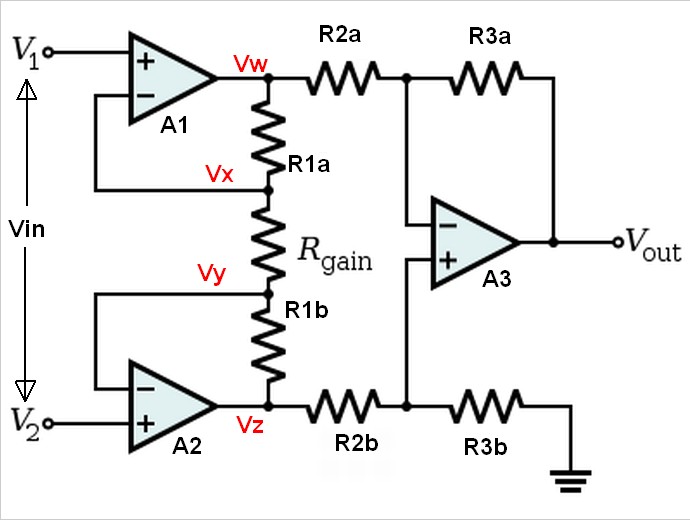 The above explanation is mine but the marvellous redrawing of the standard circuit comes from Wikipedia's Instrumentation amplifier page. Look there for their explanation of the same circuit and a lot more.

The two input op-amps are acting as buffer amplifiers with gain. While the circuit does increase the gain equally for the differential input stages, it also increases the gain for common-mode signals. As the single gain resistor, R1, is connected between the summing junctions of the two input buffers, the full differential input voltage will appear across R1 because the voltage at the summing junction of each amplifier is equal to the voltage applied to their positive non-inverting input. Therefore, the amplified input voltages at the outputs of op-amp1 and op-amp2 will appear differentially across the three resistor network of, R2, R1, and R2 across the two op-amp outputs.

The voltage across R1 equals Vin, therefore the current through R1 will equal (Vin/R1). Op-amp1 and op-amp2 will therefore operate with gain and amplify the input signal. However, if a common-mode voltage is applied to the amplifiers inputs, the voltages on each side of R1 will be equal, and no current will flow through this resistor. Since no current flows through R1 (nor, therefore, through both R2 resistors, amplifiers 1 and 2 will operate as unity-gain followers (buffers). Therefore, common mode signals will be passed through the input buffers at unity gain, but differential voltages will be amplified by the factor (1 + (2 R2/R1)) as indicated below by Russell McMahon. The overall gain can be further increased by the ratio of R4/R3 set up by the differential amplifier, op-amp3. Then the transfer function correctly given in my tutorial will be:

Also the 3 Op-amp instrumentation schematic presented by Russel McMahon as part of his Wikipedia explanation also matches exactly my own schematic representation of a high impedance buffered instrumentation amplifier. on the www.electronics-tutorials.ws site.