Communicate with 3 Sensors with the same I2C address

I got three sensors stick from sparkfun : https://www.sparkfun.com/products/10724 which each one got an arduino pro mini that filters the data before to send to a main Arduino. 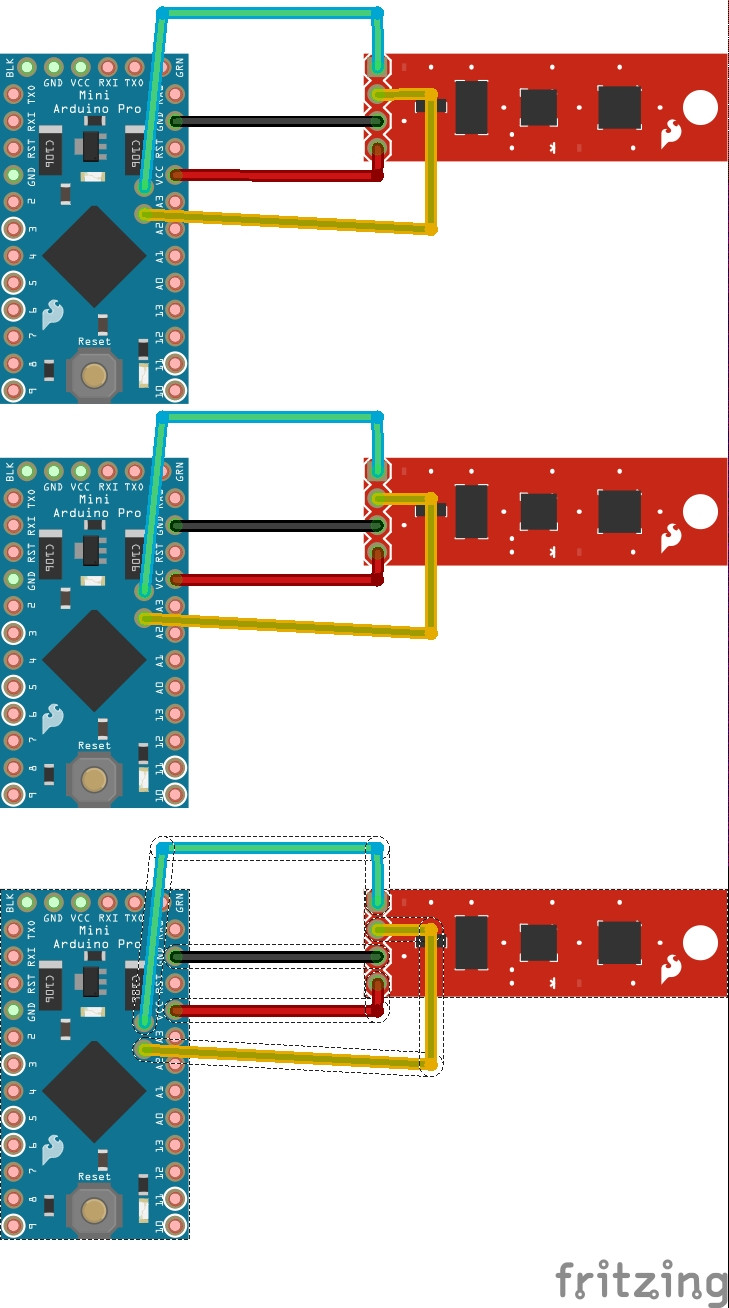 and until this point everything works, not even a issue.

But what I want to do next is to connect all the 3 arduinos via I2C to share the filtered data and at this point there is a big issue, the first arduino can acces to 3 Sensors via I2C and it crashes when I start to access to the unique address.

I wanted to make an independent I2C bus that exists only between the Sensor and Arduino pro mini and then another one that share the data to the main Arduino Uno.

So far I got no luck and what I came up to do, is to use a Serial cascade system

There is anything I can do to use the I2C bus rather than Serial to share the 3 data filtered by each arduino and send it to the main Arduino UNO ?

There are always at least two solutions to a problem.

There are also bus switches/multiplexers, that you can either make yourself out of logic gates or buy ready made chips, to use the same I2C lines between devices with the same address - the selection of the device is made with separate lines in this case, rather than made in software like in the above solution. Doing this you could actually get rid of your slave arduinos (assuming the master arduino has enough code memory, RAM and processor time to do everything you want), that would be cheaper and less tedious to maintain.

Finally there are software line drivers. Instead of using the only I2C hardware driver on the pro mini, there are libraries that provide functions to control arbitrary GPIOs in the same way a hardware driver would. They're usually slower than dedicated drivers, but for many applications it's enough, and this is certainly okay for you. http://playground.arduino.cc/Main/SoftwareI2CLibrary

Not the answer you're looking for? Browse other questions tagged arduino i2c or ask your own question.

1
Wireless UART Speed Shift
1
BMP085 and Humidity and Temperature Sensor with arduino
1
I2C bus and Arduino Uno
1
Getting gyro values from MPU-6050
1
how to choose the right pullup resistances for i2c lines with multiple slaves
0
I2C / TWI freezing with SDA stuck at LOW
1
Communication via I2C sensor via CAN bus
0
Viewing the Arduino Serial Monitor while ATMega328P is powered by batteries
1
FTDI + Arduino mini on a custom board. Not able to program via FTDI & also directly via a blank arduino UNO
1
Is there something wrong with this irregular clock line (SCL) on I2C? ( Arduino board)