How does a capacitor block DC?

I am confused with this! How does a capacitor block DC?

I think it would help to understand how a capacitor blocks DC (direct current) while allowing AC (alternating current).

Let's start with the simplest source of DC, a battery: 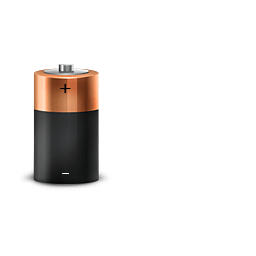 When this battery is being used to power something, electrons are drawn into the + side of the battery, and pushed out the - side.

Let's attach some wires to the battery: 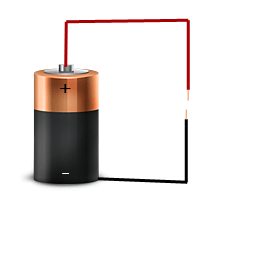 There still isn't a complete circuit here (the wires don't go anywhere), so there is no current flow.

But that doesn't mean that there wasn't any current flow. You see, the atoms in the copper wire metal are made up of a nuclei of the copper atoms, surrounded by their electrons. It can be helpful to think of the copper wire as positive copper ions, with electrons floating around: 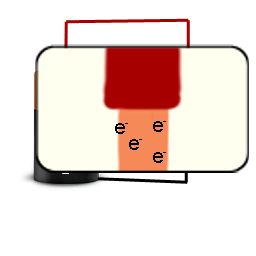 Note: I use the symbol e- to represent an electron

In a metal it is very easy to push the electrons around. In our case we have a battery attached. It is able to actually suck some electrons out of the wire: 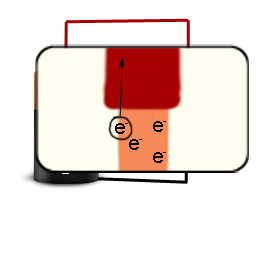 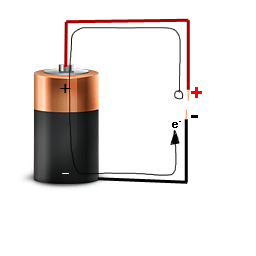 So when you first connect the battery to these wires, only a little bit of current will flow. The battery isn't able to move very many electrons, so the current flows very briefly, and then stops.

If you disconnected the battery, flipped it around, and reconnected it: electrons in the black wire would be sucked into the battery and pushed into the red wire. Once again there would only a tiny amount of current flow, and then it would stop.

The problem with just using two wires is that we don't have very many electrons to push around. What we need is a large store of electrons to play with - a large hunk of metal. That's what a capacitor is: a large chunk of metal attached to the ends of each wire. 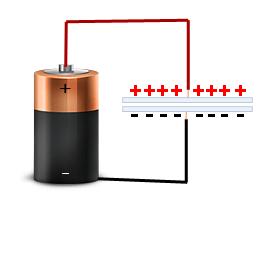 So if you apply an alternating current source to a capacitor, some of that current will be allowed to flow, but after a while it will run out of electrons to push around, and the flow will stop. This is fortunate for the AC source, since it then reverses, and current is allowed to flow once more.

But why is a capacitor rated in DC volts 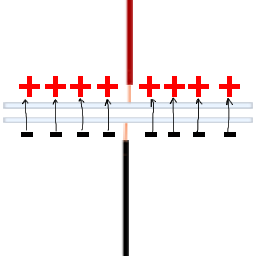 This is why a capacitor can store a charge; electrons being attracted to the holes they left behind.

But that waxed paper isn't a perfect insulator; it's going to allow some leakage. But the real problem comes if you have too many electrons piled up. The electric field between the two "plates" of the capacitor can actually get so intense that it causes a breakdown of the waxed paper, permanently damaging the capacitor: 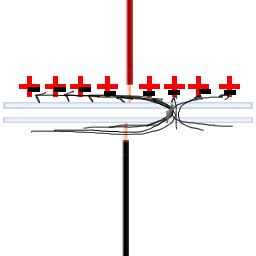 In reality a capacitor isn't made of tin foil and waxed paper (anymore); they use better materials. But there is still a point, a "voltage", where the insulator between the two parallel plates breaks down, destroying the device. This is the capacitor's rated maximum DC voltage.

Let me see if I can add one more perspective to the other 3 answers.

Capacitors act like a short at high frequencies and an open at low frequencies.

So here are two cases:

Capacitor in series with signal 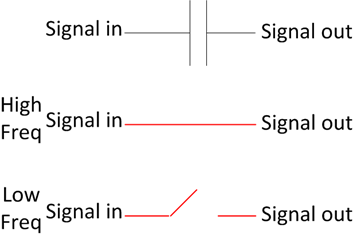 In this situation, AC is able to get through, but DC is blocked. This is commonly called a coupling capacitor.

Capacitor in parallel with signal 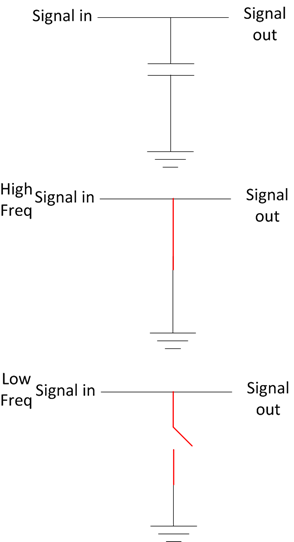 In this situation, DC is able to get through, but AC is shorted to ground causing it to be blocked. This is commonly called a decoupling capacitor.

I have used the terms "High Freq" and "Low Freq" rather loosely as they don't really have any numbers associated with them. I did this because what is considered low and high depends on what is going on in the rest of the circuit. If you want to learn more about this you can read about low-pass filters on Wikipedia or some of our RC filter questions.

The voltage that you see with capacitors is the maximum voltage you can safely apply to the capacitor before you start to run the risk of the capacitor physically breaking down. Sometimes this happens as an explosion, sometimes fire, or sometimes just gets hot.

The explanation is in the fact that opposite charges attract each other. A capacitor is a compact construction of 2 conducting plates separated by a very thin insulator. If you put DC on it one side will be positively charged and the other side negatively. Both charges attract each other but can't pass the insulating barrier. There's no current flow. So that's end of story for DC.
For AC it's different. One side will successively be positively and negatively charged, and attract negative and positive charges resp. So changes on one side of the barrier provoke changes on the other side, so that it appears that the charges cross the barrier, and that current effectively flows through the capacitor.

A charged capacitor is always DC charged, i.e. one side has the positive charges and the other side the negative. These charges are a storage for electrical energy, which is necessary in many circuits.

The maximum voltage is determined by the insulating barrier. Above a certain voltage it will breakdown and create a short circuit. That can happen under DC but also under AC.

A simple way of thinking about it is that a series capacitor blocks DC, while a parallel capacitor helps maintain a steady voltage.

This is really two applications of the same behavior - a capacitor reacts to try to keep the voltage across itself constant. In the series case, it's quite happy to remove a steady voltage difference, but any abrupt change in one side will be passed through to the other to keep the voltage difference constant. In the parallel case, any abrupt change in voltage will be reacted to.

This is not a very technical answer, but it's a graphical explanation that I find very funny and simple: 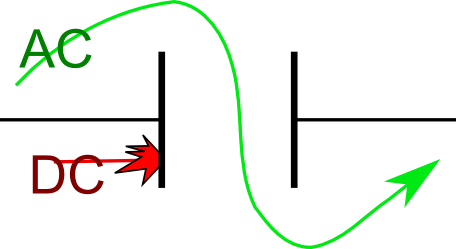 The amount of charge that develops across the plates of a capacitor with a given voltage across its terminals is governed by the formula:

Differentiating both sides (current is the time derivative of charge), gives:

So a capacitor allows no current to flow "through" it for DC voltage (i.e. it blocks DC).

The voltage across the plates of a capacitor must also change in a continuous manner, so capacitors have the effect of "holding up" a voltage once they are charged to it, until that voltage can be discharged through a resistance. A very common use for capacitors is therefore stabilize rail voltages and decouple rails from ground.

The voltage rating is how much voltage you can apply across the plates before the electro-static forces break down the material properties of the dielectric material between the plates rendering it broken as a capacitor :).

My answer to such questions is always "water". Water flowing through pipes is a surprisingly accurate analogy for current flowing through wires. Current is how much water flows through a pipe. Voltage difference becomes the difference in water pressure. The pipes are supposed to lie flat, so that gravity plays no role.

In such an analogy, a battery is a water pump, and a capacitor is a rubber membrane which completely blocks the pipe. DC is water flowing constantly in one direction through a pipe. AC is water flowing back and forth all the time.

With this in mind, it should be obvious that a capacitor blocks DC: since the membrane can only stretch so far, water can't just keep on flowing in the same direction. There will be some flow while the membrane stretches (i.e. the capacitor charges), but at one point it becomes stretched enough to completely balance the water pressure, thus blocking any further flow.

It also becomes obvious that a capacitor won't block AC completely, but it does depend on the membrane properties. If the membrane is sufficiently stretchy (high capacitance), it will pose no challenge to water flowing back and forth quickly. If the membrane is really rather stiff (e.g. a thin sheet of plastic), this corresponds to low capacitance, and if the water flows back and forth slowly, such flow will be blocked, but very high frequency oscillations will still make it through.

This analogy has been so exceptionally useful to me that I really wonder why it isn't used more widely.

First off, a capacitor blocks DC and is a lower impedance to AC, while an inductor tends to block AC yet pass DC very easily. By "blocking", we mean than it offers a high impedance to the signal we're talking about.

First, though, we need to define a few terms to explain this. You know what resistance is, right? Resistance is the opposition to current flow that results in the burning of power, measured in watts. It does not matter if the current is AC or DC, the power dissipated by a perfect resistor is the same amount for either.

So resistance is one kind of "impedance" to current flow. There are 2 others - "inductive reactance", and "capacitive reactance". Both are also measured in ohms, like resistance, but both are different in that, for one thing, they vary with frequency, and for another, they don't actually consume power like a resistance does. So all together, there are 3 kinds of impedance - resistive, inductive, and capacitive.

The amount of blocking or impedance of inductors in ohms can be determined by:

Where 2pi is approximately 6.28, f is the frequency (AC, obviously) of a signal, L is the inductance measured in henries, and where "X sub L" is the inductive reactance in ohms.

Inductive reactance is the impedance of a component due to inductance; it is a kind of resistance, but does not actually burn power in watts like a resistor does, and since "f" for frequency needs to be supplied, the value of it varies with frequency for a given inductor.

Capacitors are the opposite- the formula for capacitive reactance is

A capacitor across DC rails is there, in effect, to short any AC signals that might otherwise get onto the supply rails, so the amount of AC across your DC circuit is reduced.

The voltage rating on a cap is the maximum voltage (sum of DC and any AC present!) that the cap should see. Exceed this voltage and the cap will fail.

Not the answer you're looking for? Browse other questions tagged capacitor dc or ask your own question.

27
Why does a capacitor block DC and not AC?
9
How Exactly Current Flow Through a Capacitor?
-2
Is current able to flow through a Capacitor at DC?
2
How does capacitor block DC when an AC signal is superimposed on top of it?
1
conduction current vs displacement current across capacitor
1
Current through Capacitor, how is it possible? How does it relate to displacement current?
16
What is the purpose of a capacitor to ground?
5
Why place inline capacitors on PCIe traces?
2
Why can't a feedback network use a capacitor?
2
How do capacitors in series work?
See more linked questions

13
What are the behaviors of capacitors and inductors at time t=0?
4
How does a capacitor blocks low frequency signal? Please explain it without the impedance formula?
1
Why does an uncharged capacitor short out a resistor in a basic DC circuit?
1
using Capacitors to block variations in source voltage?
2
Why does capacitor polarity matter?
2
Does a capacitor store voltage?
1
How does same capacitor with different dielectric affects the circuit?
2
How to determine the decoupling capacitor values for the power bus of an RF device?