grounded emitter or common collector circuit or something else?

first of all, I'm sorry if I did not use the technical correct symbols for the circuit diagram, but I think it will do. I've multiple questions. Maybe someone can give me a hint.

I'd like to control two diffrent types of high power LEDs with an Arduino UNO. The 24V power supply is just as an example. There is ofcourse the option to use a smaller one.

1st: I'm not quite shure what kind of other schematics might be usefull. I know there should be at least a resistor before the transistor on the side of the Arduino as well as on the side of the power source, but when I'm looking at some information (http://www.elektronik-kompendium.de/sites/slt/0204302.htm sorry, its in german) it quickly gets complicated and I become insecure what I should do. Same goes for the kind of schematics for the transistor --> 2nd question

2nd: Grounded emitter circuit or common collector circuit? What might be more suitable? Or something completely different?

3rd: The four LEDs in line or better parallel with idividual resistors? What would be the advantage?

With a common collector configuration the output voltage can never be larger than in the input so you will be limited to the 5V output of the Arduino (minus 0.7V for the bBE junction).

So the most appropriate is a common emitter.

You need to control the base current with the common emitter so use a resistor from the Arduino that gives about 1/10 of the collector current. Since you have a 700mA LED that will need about 70mA base drive which is too much for the Arduino (can only supply a maximum of 20mA).

You could use a darlington connected transistor which has higher gain, for example a TIP120. You could run that with just 1% of the collector current into the base - i.e. 7mA. A resistor of about 470 ohm would be good. Alternatively you could use a power MOSFET, select one with a logic level gate drive as you only have 5V from the Arduino. A gate resistor is not necessary. The resistor in series would need to be (24 - 3.4)/0.7 = 29 ohm. This resistor needs to dissipate ~15 Watts so it will need to be a large wire wound one or multiple resistors in series/parallel to dissipate the heat - it will get hot.

Since you have 24V to power the LEDs it is better to put the 4 LEDs in series as you have shown. You will only need one series resistor and the total power consumption will be less as lighting all 4 LEDs will take just 350mA - if you put them in parallel they will take 1.4A. The total voltage is about 12.8V leaving about 11V across the resistor. This resistor should then be 31 ohm (about the same as the other one). It will only dissipate ~4Watts so doesn't need to be as large as the other.

Using 24V this circuit is not going to be efficient as most of the power is dissipated in the resistors. It would be better if it could be driven from 12V or 5V. 12V would probably not be enough to drive the 4 LEDs in series so they could be split into two groups of two. With 5V each LED would get its own series resistor.

For a great deal of extra complexity you could increase the efficiency by driving the LEDs from a switching supplies.

For the 700mA (especially), I would suggest using a MOSFET rather than a simple BJT, with the LED(s) in the drain circuit. A single 700mA LED dropping 3.4V means that you are wasting 14 watts in the resistor with a 24V supply, which is pretty large (and wasteful- 85% of the energy is lost before it even gets to the LED). It would be better to use a 12V or even a 5V supply for that LED if possible. For example, you could use an IRLML6344TRPBF which will easily switch 1A in an SOT-23 package. 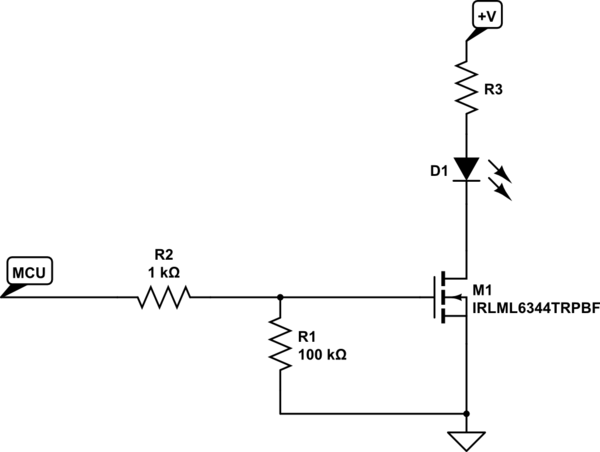 R1 and R2 are optional in this case, you could connect the transistor directly, but they provide some measure of protection against open and shorted fault connections respectively.

If you have multiple supplies available, there is nothing wrong with returning the LED and resistor end to different supplies. You could use a 5V supply for one and a 24V supply for another. The only requirement is that the typical sum of forward voltages of the LEDs is enough less than the supply voltage that enough voltage is dropped across the resistor to get a predictable and stable current. 30% more than the LED voltage should be fine. So a 5V supply is okay for your 3.4V LED and 12V is almost enough for 3 x 3.2V LEDs (and 24 is enough for 5 series 3.2V LEDs).

You should put the NPN transistors on the ground side of the LEDs. As you show, they would act as emitter followers, and only apply Vcc - 0.7 volts to the LEDs.

Putting several LEDs in series, with a single current-limiting resistor, is fine if you have a suitable power supply. The total forward voltages of the LEDs should be 2 - 3 volts less than the power supply voltage, to allow a reasonable voltage drop over the current limiting resistor.

If you have a high voltage supply (12 or 24 volts) having several resistor/LED sets in parallel will waste a lot of power in the resistors.

Not the answer you're looking for? Browse other questions tagged arduino led transistors schematics or ask your own question.

1
Arduino: Common Ground Issue? Powering Buzzer, LEDs via transistor as a switch
1
Pull up does not work
5
BC547/BC548 with 5V at base can't control 12V at collector-emitter?
8
9-volt battery connected to transistor controlling LEDs with Arduino
0
Connect multiple, non-independent, RGB LEDs
3
Questions about the circuit of the Arduino Micro
0
Photoresistor power switch for arduino, does this look correct
2
NPN Transistors Not Working When Emitter Is Grounded
0
Externally powering a series of LEDs at maximum brightness with 470 ohm resistors and fading capabilities