In a moment of cheapness, I decided not to order a 5v to 3.3v level shifter from Sparkfun, but instead to put it together myself. The original schematic used a BSS138 MOSFET, but since I enjoy surface-mount soldering about as much as root canal treatment, I decided to use a similar seeming MOSFET that is through-hole mounted and easily available from my preferred supplier.

The results of this were sub-optimal. When pulling the 5v line to ground, all was fine - the 3.3v side went to 0.07v. But when pulling the 3.3v to ground, the 5v line showed around 4.14v (it was otherwise a touch above 5.1v). On a closer reading of the datasheets involved, as well as the original Philips application note on the subject, I began to come to the conclusion that the gate threshold voltage was the problem.

By altering the schematic and tying the MOSFET's gate to 5v instead of 3.3v, both sides seem to work fine. Pulling either side low causes the other side to go low. I'm not, however, at all confident that this is actually a sane thing to do. My understanding of the original schematic isn't deep enough to form a sensible opinion.

Will this modified schematic work, or are the current good results I'm seeing mere fluke or a precursor to something releasing magic smoke?

This is because in the original circuit the FQN1N60C Vth is too high for the available Vth and is not turning on properly. A MOSFET with low enough Vth would turn on properly with the available voltage. In the revised circuit you have provided the FQN1N60C with enough gate voltage in the operated state but not so much that it will be operated unintentionally. If you used a low Vth MOSFET it would be turned on by the fate voltage available when it was meant to be off and the circuit would fail.

Below is the original level shifter circuit diagram.

The BSS138 is an N Channel MOSFET - so it conducts when its gate is positive relative to source, it is usual for it's drain to be higher than it's source, and the internal body diode blocks when Vds is +ve and conducts when Vds is negative. 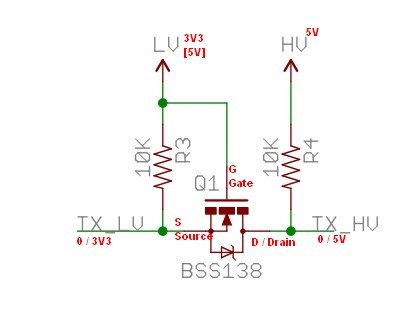 If you now replace the MOSFET which has a Vth < 1,7V it will always be turned on. ie a better quality MOSFET works worse (or not at all). The "cure" is to use a MOSFET initially with Vth < to << 1.7V.

2
Which mosfets can be used for level shifting
1
How to correctly test a 4-channel Logic Level Converter?
0
How to safely connect a 1.8v push-pull output to a 3v MCU input?
0
How does a LSF level-shifter work?
0
Why does a MOSFET level shift on the I2C bus break some I2C devices that operate on the same level as the MCU?

10
MOSFET Switch - Not Turning Fully Off?
0
MOSFET shorted after I connect them in parallel, what's wrong?
0
P-Channel MOSFET has a really high voltage drop
0
Would a MOSFET driver be a suitable replacement for this circuitry and would it reduce power dissipation in the FET?
0
Bidirectional level shifter
5
MOSFET high frequency gate driving