I have a DSP kit with a serial connection. Since, I am operating on my laptop, I do not have access to a serial port. So, I would require a Serial to USB converter

A1: By far the quickest and easiest method, and possibly the equal best, is to buy an existing USB to serial converter. I've seen these advertised on ebay for under $5 and those were probably not the cheapest. Here are ebay's listings of USB to RS232 converters - well worth looking at to see the range available (and prices).

Wow! - here is one for $US3 including shipping to the US from Hong Kong.

Here are a few dozen photos and links to serial to USB converers - hover over the pictures for more information (on the page linked to above - not on the picture below) - click to go to the related site. A few examples - lots of choice !!! - 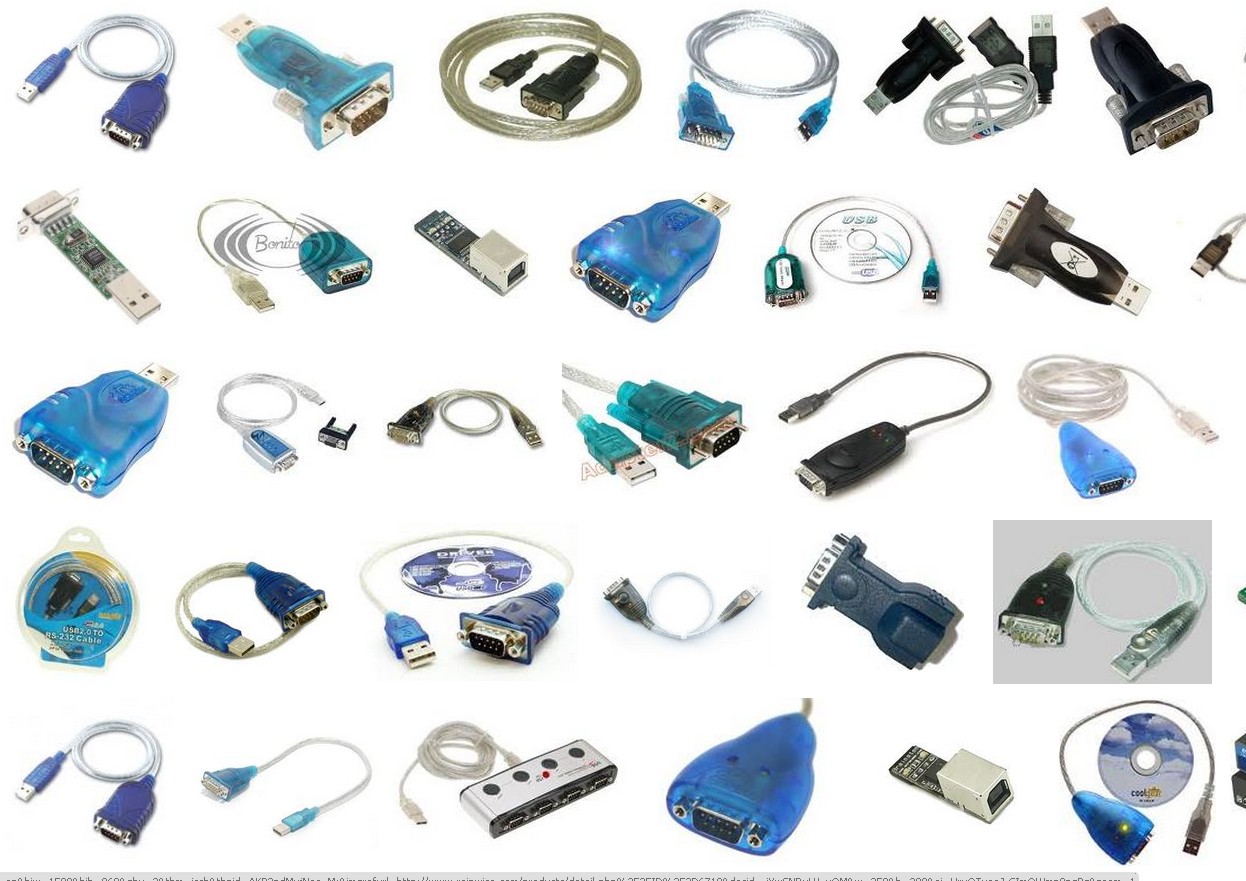 You can build your own using any of several available custom ICs created for this purpose - but doing that will cost you more than buying a prebuilt one.

A market leader but not the only source of ICs is FTDI corp who make these products.

A2. The most common units (usually a "cable" that plugs into a USB port) appear to a PC as a standard serial "comms port". They work across a range of baud rates. May be manufacturer dependant. Will be settable in software.

A3: As above - appears as a standard serial port.

A4: Some manufacturers peripherals do strange things and may not work for all converters. For example the PIC based PICAxe system uses a programming protocol that sends all data to and fro using RS232 "break signals". ie they do not use the data lines for information transfer. Some converters do not support the break signal.

You will need to know if your equipment is grossly non standard. If it is, some converters may work with it.

Yes. Classic serial ports are ordinarily byte-oriented, ie, one character at a time with quite low latency. USB is inherently packet-oriented, with comparably high-latency. In other words, USB is great for moving a lot of data at once, but it's actually slower at moving tiny amounts of data. If you try to move a lot of data in tiny pieces with USB, you lose - badly.

For just typing on a terminal program talking to a modem or an embedded device, or even uploading files, etc, this is really not a problem, because single doses of the latency are small in human terms, and the USB can easily move blocks of data fast enough keep up with any serial baud rate.

But other protocols which depend on constant back-and-forth of short messages or single characters between a computer and a serial peripheral can slow to a crawl (or even mis-operate) when used with a usb-serial converter. If a computer does something like send a single character, and wait for the peripheral to respond before sending then next, then the character rate is determined by the latency for two entire usb packets - one to send a single character, and one to receive one (it may even be worse - the receive might at the lowest level involve poling). In today's world where USB-serial converters are as or more common than real serial ports, its important to design protocols so that you can send out a lot of data, before needing to wait for a reply. With legacy systems, you may get lucky and find it works fine, it may work but slowly, or it may not work reliably at all.

And even within a given protocol, peripheral, computer, and operating system driver, the design of the client software matters. I once encountered a piece of management software for an embedded device which had been written and tested by a contractor using a real serial port. It turned out to use some variation of .NET serial calls that turned out to be "watch the results crawl in" slow on a laptop with a usb-serial converter. My own previous simple win32 management tool for that device ran without apparently delay on the same laptop with the same converter. Perhaps I wrote better code, but given that the converter was my ordinary test environment, if there had been a similar problem with my code, I would have been lucky enough to find it while there was still time to fix the problem.

Moral of the rant in todays world, anything (hardware or even client software) designed to use a serial port should be tested for usability with usb-serial converters early enough in its development that the design can be changed to fix any issues discovered.

You can also buy inexpensive ready made cables that do this:

Amazon page with examples of USB to serial cables

Depending on the speed of the chip, most standard baud rates should be usable, they are on the cable I have here somewhere. If I recall correctly, once the drivers are installed, the cable/chip should look like be a COM port and you can use Hyperterminal etc, as if (almost *) using a serial port.

For option 1, to create a Serial to USB converter, I'd try the Ardunio, there are some examples around the web, but I'd only do that if I ran out of ideas for other projects.

I found Three famous chips in a site in India an at a very reasonable price. If you want to make one use any one of your choice. I have made one with PL2303HX and one with CP2102 bothe are great and working without any issue.

Not the answer you're looking for? Browse other questions tagged usb serial dsp baudrate or ask your own question.

3
Configuring baud of USB-Serial bridge
1
What's the easiest way to get fast USB serial communications?
0
10Mbs USB to serial communication
0
How to recognize USB to RS232 null modem cable
0
Difference between PuTTY Serial and Modbus
1
MSP430 USB Module and Baud Rate Detection
0
Parameter is incorrect error with usb 2.0 but not with usb 3.0 with C# serial program
1
How to demonstrate the effect of baudrate in serial communication