The circuit is a MCU triggered, capacitor based fan speed controller.

The circuit works fine when a single triac is connected but when both triacs are wired and triggered alternately, any of the triac fails randomly by shorting. Initial load is a 60W incandescent bulb.

The triac gate takes close to 50mA through optocoupler. This seems much higher as the triac has senstive gate which can be triggered by a low power MCU. 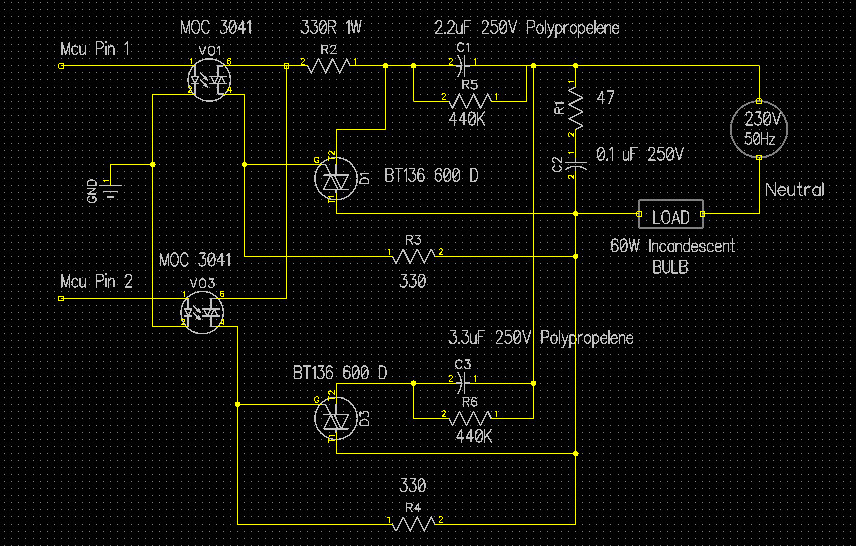 For one, I'm surprised that this circuit functions at all, even with one triac in place. The power triacs (BT136-600D) connections should be flipped, with the AC hot wire connected to MT2 and the AC neutral wire connected to MT1 as can be seen in the datasheet.

Triacs are thought of as completely symmetrical devices but in reality their slight asymmetry makes them not function correctly when the terminals are flipped. This could possibly be the solution to your problem. Additionally, depending on what other components you have hooked up to your microcontroller, it is possible that you are attempting to draw to much current from it. The datasheet for the MOC3041M says that the max current draw of the phototriac is 15 mA, this can easily be supplied by a single pin of most microcontrollers but there is still a maximum total for the MCU which could be exceeded by adding an additional MOC3041M.

I suspect there are times when both triacs are turned on, either because they both have gate current or you are turning on the second before the previous one has had time to turn off.

The 440K resistor across the caps will help but that is a time constant of more than a second so won't help much if you alternate them faster than that.

If so and there is any charge on C1 or C3 you will have a loop with both triacs and both capacitors all in series with no current limiting. Extremely high currents could develop and ultimately damage one of the trials.

You need to leave some dead-time between the two triacs being active.

What is the purpose of alternating them?

2
Digital replacement for Rotary Capasitor based fan speed controller
1
I am using a triac bta41-600b with MOC3083, doesn't work
0
Triac gate burns after getting current on it
1
Triac misfires because of noise from inductive loads
1
How can an optocoupler detect the zero cross point in an AC wave?
2
Why did this triac driver resistor let the magic smoke out?
1
Can a triac work with MT1 and gate reversed?