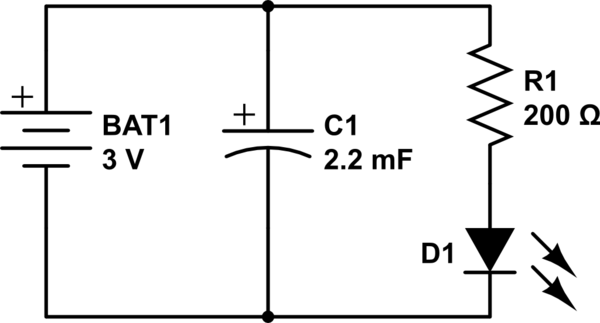 Electron flow is the reason the LED lights up then fades but not from electrons that originated from the battery, but rather from the metal plates located inside the capacitor

keep note the series circuit is not actually closed, the capacitor has dielectric material keeping the current from flowing through

Before anything, both plates inside the capacitor are neutral, but once you connect the battery, the electrons from the plates in the capacitor get attracted to the positively charged side of the battery. and that its self is current(flow of electrons)

so the only way for them to touch or reach each other is if the terminals are connected by some conductive material so when you connect the LED to the circuit, in series, the electrons now have a way to reach the protons(positive plate) so they flow inside the conductor, creating current so when you put a load, such as an LED, current flows though, making the LED light up, but for a short while

3
Analog, discrete component fade-in
7
Simple transistor & capacitor circuit question
0
Connecting 5 12V LEDs in a parallel circuit
2
Capacitor Delay Circuit
3
How does this circuit work to fade an LED in and out?
2
Slow build-up and discharge LED effect
2
changing 2000 honda civic domelight from incandescent bulb to LED panel- smoothing out PWM “dimming” with capacitor circuit
1
Is there a way to make an LED blink using a passive circuit?
2
How would this circuit work? Would the LED behave like a strobe?
0
about the high voltage capacitor found in charger circuit