Just for clarity the picture of the speed regulator is attached.

I have tried the circuit below. It works fine with one Triac wired but when both Triacs are wired and triggered one at a time, the Triacs fails randomly. Later it was traced that MT1 terminals of both Triacs are connected to LOAD which is a 60W incandescent bulb. So when a Triac conducts the MT1 and MT2 terminals of the other Triac also gets supply while no gate current is given. I think this cause the Triac to fail. Is this correct?

Is there a way to solve this. 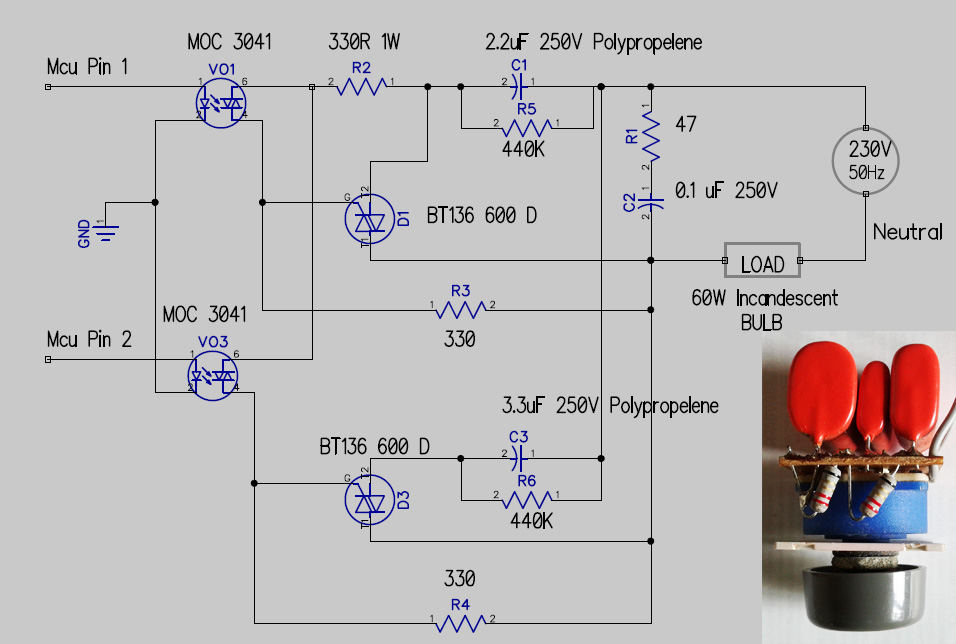 Spontaneous triac triggering is often caused by a sharp rise in dv/dt or di/dt, both of which are strongly associated with inductive loads (such as the motor which you are attempting to control). The snubber you have with R1 and C2 should help with this but improper selection of values can easily nullify this effect. Snubberless triacs are made which do not operate in the 4th quadrant and have high tolerance for high dv/dt and di/dt characteristics.

There are also many application notes on the subject as random triggering is a common problem with triacs when attempting to control heavily inductive loads.

Additionally I agree with @Russel McMahon in that the resistor R2 should not be shared between the triacs, you should add a second resistor of the same value in parallel which feeds the second triac. Attempt to isolate the triacs as much as possible from each other, with no shared components, only shared power supply and load.

1
Wired Or of Triacs don't seem to work
2
Triac fails unusually
0
What type of Resistors be used with Triac terminals? 1/4 or 1 watt
0
AC induction motor controlled by TWO TRIACS. They blow down
1
Use a TRIAC to connect/disconnect a capacitor to a PSC motor
1
How can an optocoupler detect the zero cross point in an AC wave?
0
Triacs are getting damaged BTA41 BTA24
1
Can a triac work with MT1 and gate reversed?