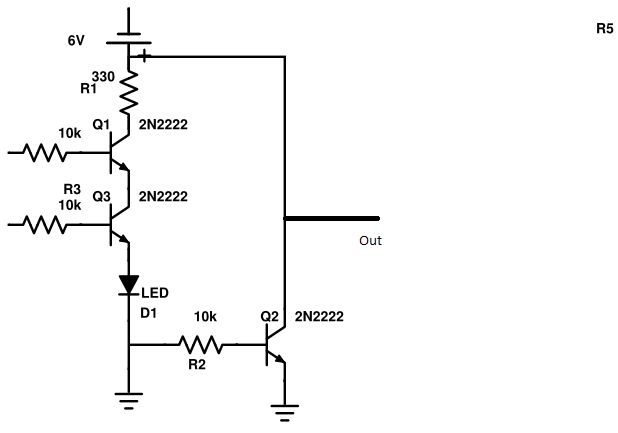 In all logic circuits, the output of one gate becomes the input of another . Here the output of the AND gate formed by Q1 and Q3 forms the input Q2 (which can be assumed as a NOT gate) . So , if and only if current flows through both bases Q1 and Q3 should current flow through the LED and to the base of Q2 ,thus enabling current to flow from the collector of Q2 to the emitter . This makes current flowing through "Out" essentially zero

This is disastrous, the AND gate is not behaving like it should and is able to switch another base with current only applied at one base . How do you practically get around this ?

IMPORTANT : Ignore the first ground , it isn't supposed to be there

Where did you get that diagram? (you copied an NMOS gate circuit??) It has some problems....

Now you have an RTL type gate, but with a somewhat uncommon input stage. The (old) designs I have seen use teh two input transistors in parallel, with or without an output trasistor.

Not the answer you're looking for? Browse other questions tagged voltage transistors bjt or ask your own question.

5
Current through the reverse biased junction in transistor
7
FET vs bipolar junction transistor
3
Help between 2n2222 and 2n2222a?
0
How to connect the emitter of a transistor to the base of another transistor? (PNP)
2
Transistor Logic Gates in One Breadboard
2
Bipolar transistor as a switch
2
Diode transistor circuit logic
3
Why transistor doesn't oscillate in this configuration?
2
Prevent NPN Transistor Base-Emitter Current