I would like to make sure that I understood p JFET (https://electronics.stackexchange.com/a/97350/78253) right: 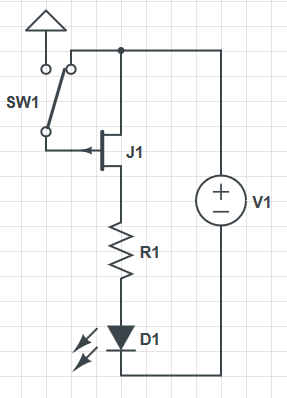 With SWitch1 in its current position, there is voltage at the gate of the J1 p JFET, the depletion layer is large, current through J1 is blocked, D1 is dark.

With SWitch1 closing to the ground, there is no voltage at the gate of the J1 p JFET, the depletion layer is very small or not there at all, current can flow through J1, D1 is shining (correct voltage V1 and resistance R1 provided).

Correct or what did I make wrong?

Keep in mind a couple of things that are valid for every JFET (both N- and P-channel):

The only (main) difference between N- and P- channel devices is the polarity of Vgs needed to control the DS current. Since a JFET has a PN junction (i.e. a rectifier diode) from gate to channel, it is paramount not to bring this diode into conduction, otherwise the JFET won't work and may also be damaged. Therefore the gate diode must always be reverse biased (or slightly forward biased, but let's not go there for simplicity).

In your case, when the switch is like it is drawn, S and G are shorted, hence Vgs=0, so the JFET will conduct (and this would be true also for a N-channel type). If you connect G to ground you will have the source more positive than gate, and this is bad because the gate diode will be brought into conduction, and this will damage the device since there is nothing that limits the current in the gate diode in that case.

If you connect the gate of a P channel JFET to ground while one of the other pins (JFETs are symmetric, source and drain are interchangeable) is connected to a positive voltage you will get current through the gate.

P-JFET is essentially a bar of P semiconductor wrapped in N semiconductor. This means that you get a diode with its cathode at the gate. You should never forward-bias this diode.

So, if you apply zero volts to the gate, then maximum current flows trough the channel. If you connect the gate to a positive voltage, then depletion layer forms between channel and gate and the current is reduced.

A n-JFET is controlled like a vacuum tube - zero volts on the gate open it, negative voltage shut it off.

The gate voltage here is relative to the drain or source, not ground. 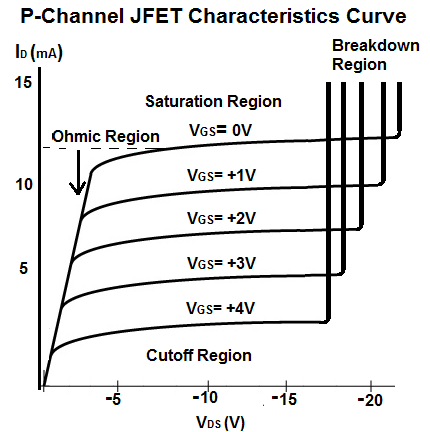 Source is connected to positive rail (as per your diagram). VGS in the graph is positive and therefore control voltages are from the positive rail (VGS = 0V) and above (VGS = +X volts)

It's probably easier to visualize this with an N channel JFET: - 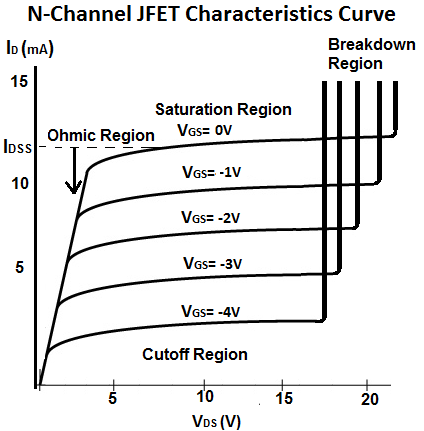 Here, source is at 0V and the gate is taken below 0V to gradually switch off the device.

0
P-channel JFET gate voltage
0
In an n-channel JFET, why isn't the formation of depletion layer symmetrical?
1
JFET Amplifier Exersice
2
Jfet as HV resistor
0
Can a JFET replace a IGFET? (A 3N139 IGFET)
2
How current is steady after pinch off voltage?
1
Describing the process of pinching off of a n channel in JFET
1
What would happen if I left the gate open in a self-biased JFET circuit?
2
Working of JFET as amplifier