Issue with the AMIS42700 CAN bus extender

I am currently setting up a CAN network of 16 nodes. For future extension of the network, the nodes are distributed on 4 different branches. These branches are bonded together by two CAN bus extenders (more specifically, two AMIS42700 chips) and supervised by a master CAN node (even if there is no such a thing in CAN). The AMIS42700 acts as both a CAN extender and transceiver for the master node. The schematic of the CAN bus extender part is showed below: 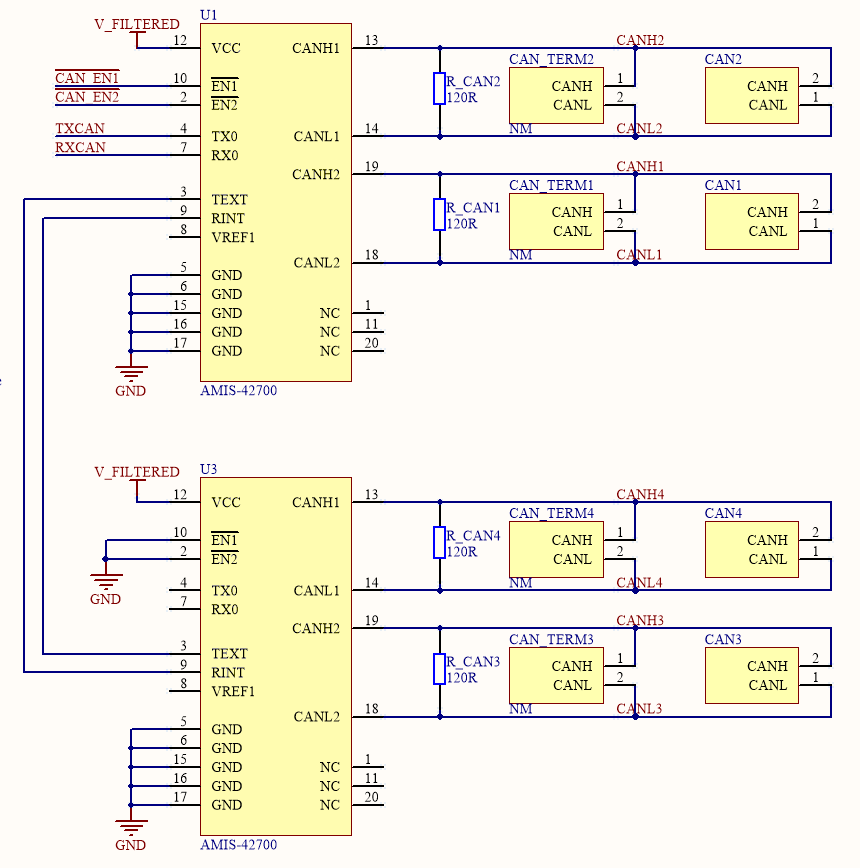 The issue with the AMIS42700 chip is that when trying to broadcast a message to all nodes, it seems to keep sending the same message repeatedly. This does not occur when transmitting messages between slave nodes (I checked this on the oscilloscope).

Where this is not a problem in itself when broadcasting messages from master to slaves, the CAN nodes receive multiple replicas of the same message, and eventually the network becomes saturated with messages from the master node. This affects the overall quality of the communication and is rather problematic in my case.

Can anybody shed some light on this peculiar behavior? Is it specific to CAN bus extenders?

For completeness, here is a list of things that I already tested:

All advices on the testing method and on the CAN bus extenders and CAN in general will be more than appreciated!

The issue with the AMIS42700 chip is that when trying to broadcast a message to all nodes, it seems to keep sending the same message repeatedly

This implies that the problem could as well be on the CAN controller level. There must be at least one CAN controller present who will acknowledge the reception of the message, or otherwise the controller will keep trying 128 times. Some troubleshooting to check:

(For an error frame, it should start with 6 bits, which are either dominant or recessive depending on what error state the sending node is in: active error state=dominant bits, passive error state=recessive bits. A node is in active error state until after 128 attempts, when it reverts to passive and can no longer mess up bus arbitration. No matter if active or passive, this part of the frame violates the "bit stuffing" rule on purpose. CAN usually only tolerates up to 5 bits of equal level before using bit stuffing. So the only time when you should encounter 6 bits with same level in a row is during the error frame.)

Strangely, when disconnecting one of the CAN lines (CANH or CANL) at a time, the communication could be established between nodes. In that case though I did not check CANH and CANL at the oscilloscope.

CAN is very rugged, so even when you do such evil things to it, it may still be able to "limp home" if you are lucky.

Not the answer you're looking for? Browse other questions tagged can or ask your own question.