Resistor will heat up on what amount of current?

I tested a 470 ohms resistor with 35mA DC current flowing and my resistor is heating up.

Is there a way to calculate whether it will heat up or not?

The temperature rise of the resistor will depend on many things - its thermal impedance to air, what it is soldered to, what type of resistor it is and how much airflow there is across it. However, we can get a good idea of whether we are designing within the recommended specification of the resistor in question by calculating the power consumption.

Most cheap through-hole resistors (which I am going to assume that you are using) are rated at 0.25W - they tend to look like this: 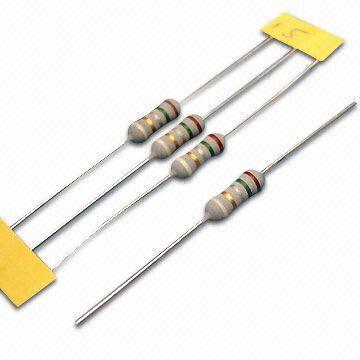 The power dissipated in a resistor can be calculated in many ways, but the most useful for us here is

Now let's examine the same for the 10kOhm resistor: \${P=0.0215^2\times10000=4.62W}\$! This is way above the power rating for this resistor, and it will very quickly heat up, glow, and then burn off the resistive element, releasing smoke and causing your circuit to fail.

So how do we fix this? There are two options.

Using a 100k resistor means the power will be slightly below 0.5 watts so you might get away with a 0.6W resistor. You can always put two 50k resistors in series - they will share the power. You could also put two 200k resistors in parallel and achieve the same result.

Choosing a resistor that is as high as possible without compromising performance is the name of the game. As we do not know what the potential divider feeds this upper limit cannot be calculated/estimated.

You are talking about burning almost 5W in order to measure a voltage. You need some way bigger resistances, I'd say at least 1M and 22k. If your micro-controller has a reliable, exact impedance on the measurement gate, you could simply use that instead of R2, along with an R1 suited to the value.

Not the answer you're looking for? Browse other questions tagged resistors temperature or ask your own question.