Why was Mini USB deprecated in favor of Micro USB?

Why? What are the advantages of Micro USB over Mini USB that made USB-IF rip out an existing standard and replace it with another one that's basically the same thing?

Added mid 2022:
A lightly edited version of a comment by @LittleWhole

In 2022 the world is moving towards the far more robust and convenient USB-C connector. While there are still issues with USB-C (including even mechanical incompatibilities), things are slowly being addressed (i.e. USB4 standard on the protocol side) and I have only ever encountered one USB-C cable that wouldn't plug into a USB-C receptacle in my life. Adoption of USB-C is definitely picking up the pace - not just in consumer electronics, but a motor controller for my school's robotics club has even adopted USB-C

A major factor in abandoning mini-USB is that it was fatally flawed mechanically. Most people who have used a mini-USB device which requires many insertions will have experienced poor reliability after a significant but not vast number of uses.

The original mini-USB had an extremely poor insertion lifetime - about 1000 insertions total claimed. That's about once a day for 3 years. Or 3 times a day for one year. Or ... For some people that order of reliability may be acceptable and the problems may go unnoticed. For others it becomes a major issue. A photographer using a flash card reader may expend that lifetime in well under a year.

The original mini-USB connector had sides which sloped as at present but they were reasonably straight. (Much the same as the sides on a micro-A connector). These are now so rare that I couldn't find an image using a web search. This image is diagrammatic only but shows the basic shape with sloped but straight sides. 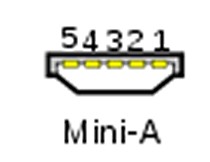 Efforts were made to address the low lifetime issues while maintaining backwards compatibility and the current "kinked sides" design was produced. Both plug and socket were changed but the sockets ("receptacle") will still accept the old straight sided plugs. This is the shape that we are all so used to that the old shape is largely forgotten. 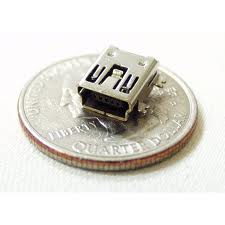 Unfortunately, this alteration "only sort of worked". Insertion lifetime was increased to about 5,000 cycles. This sounds high enough in theory but in practice the design was still walking wounded with respect to mechanical reliability. 5,000 cycles is a very poor rating in the connector industry. While most users will not achieve that many insertion cycles, the actual reliability in heavy use is poor.

The micro-USB connector was designed with these past failings in mind and has a rated lifetime of about 10,000 insertion cycles. This despite its apparent frailty and what may appear to be a less robust design. [This still seems woefully low to me. Time will tell].

Latching Unlike mini USB, Micro USB has a passive latching mechanism which increases retention force but which allows removal without active user action (apart from pulling). [Latching seems liable to reduce the plug "working" in the receptacle and may increase reliability].

The micro and mini USB connectors are of similar width. But the micro connector is much thinner (smaller vertical dimension). Some product designs were not able to accommodate the height of the mini receptacle and the new thinner receptacle will encourage and allow thinner products. A mini-USB socket would have been too tall for thin design. By way of example - a number of Motorola's "Razr" cellphones used micro-USB receptacles, thus allowing the designs to be thinner than would have been possible with a Mini-USB receptacle.

Micro-USB replaces a majority of Mini-USB plugs and receptacles currently in use. The specification of the Micro-USB supports the current USB On-The-Go (OTG) supplement and provides total mobile interconnectivity by enabling portable devices to communicate directly with each other without the need for a host computer.

... Other key features of the product include high durability of over 10,000 insertion cycles, and a passive latching mechanism that provides higher extraction forces without sacrificing the USB's ease-of-use when synchronizing and charging portable devices.

Once all can change, all tend to. A significant driver to a common USB connector is the new USB charging standard which is being adopted by all cellphone makers. (Or all who wish to survive). The standard relates primarily to the electrical standards required to allow universal charging and chargers but a common mechanical connection system using the various micro-USB components is part of the standard. Whereas in the past it only really mattered that your 'whizzygig' could plug into its supplied power supply, it is now required that any whizzygig's power supply will fit any other device. A common plug and socket system is a necessary minimum for this to happen. While adapters can be used this is an undesirable approach. As USB charging becomes widely accepted not only for cellphones but for xxxpods, xxxpads, pda's and stuff in general, the drive for a common connector accelerates. The exception may be manufacturers whose names begin with A who consider themselves large enough and safe enough to actively pursue interconnect incompatibility in their products.

Once a new standard is widely adopted and attains 'critical mass" the economics of scale tend to drive the market very rapidly to the new standard. It becomes increasingly less cost effective to manufacture and stock and handle parts which have a diminishing market share and which are incompatible with new facilities.

I may add some more references to this if it appears there is interest - or ask Mr Gargoyle.

A few more images allowing comparisons of a range of aspects including thickness, area of panel, overall volume (all being important independently of the others to some for various reasons) and retention means.

Large Google image samples each linked to a web page

What is Micro USB vs Mini USB

Every time this question comes up, someone inevitably brought up the plug cycles (5000 vs 10000). My experience proves otherwise. I have used USB Mini since released (Circa 2000 'til now) and have experienced only 1 bad USB connector, and that was due to me rolling my office chair over it.

I recently switched to USB Micro just because you can't get a phone with anything other than USB Micro, and within 3 months, the connectors on 3 out of 5 chargers have connectivity issues. The remaining 2 work under the "if bend it, then it works": http://www.youtube.com/watch?v=E0Dzp5l2PyY

None of the chargers fit snuggly into socket. The connectors are flimsy and get damaged easily. Just rolling up the charger and putting it in my pocket can cause the tip to break off.

So to summarize my data: - in 10 years, 1 USB Mini out of many have connectivity issue (due to being run over by a chair) - in 3 months, 3 out of 5 USB Micros fail and the remaining 2 are defective.

Of course, I am just one person, so N=1 may mean that I am a statistical anomaly. However, I would like to see the consortium's real world usage data.

The bottom line is nobody cares about # plugs 'til failure in laboratory situations. What the consumers care about is: how long will it last? It is quite possible that the USB Micro can withstand more plugs in laboratory environments, but in the real world, these chargers get rolled up, placed in pockets, thrown around, etc. I guess engineers sometimes forget this. Too hard, won't do it, so ignore it.

Briefly Googling for USB Micro failure vs USB Mini failure suggests that I may not be alone in this.

The nuisance in this is that I now have many USB Mini chargers sitting around that I have accumulated from devices in the past, and I am at a shortage for USB Micro chargers.

While cables and chargers cost close to nothing to make, they are > $10 to purchase. We know that in the industry, the profit margin for cables are very high.

Conspiracy theories aside. I would speculate that part of the move is economically motivated.

"People no longer buy chargers because they last too long. Let's come up with a new standard that don't, and come up with some BS to explain it."

I was involved in discussions and part of the decision loop. Then a very big and leading mobile phone maker, Nokia, asked for it. They even designed most part with a leading connector maker. USB IF eventually bite the bullet and accepted. Probably 2B+ of these connectors are shipped to date.

It was Nokia who demanded it and the primary reason was size, they were desperately trying to save size and had plans around OTG.

As you rightly note, it does the exact same job as Mini-USB, even down to having an AB socket for USB-OTG Host/Device selection.

So they don't need the old Mini-USB any more. So it's deprecated. No point in having two, and the old one is too fat. So drop it in favour of the new one.

That's really all there is to it. It's thinner, and thus better.

While on the whole, I am satisfied with the switch to USB Micro, my only major gripe is the less obvious keying. Inserting the plug with good lighting is no problem (if you can see), but trying to plug in your cell phone after you've crawled into bed with the lights off can be a trial. As somebody who works with people with disabilities and medical conditions, I have heard from clients with compromised motor control, those with low vision, and those with distal neuropathies that they do experience a harder time plugging in their devices nowadays.

My hope is that the standard for both plug and receptacle can be altered slightly to yield a more obvious tactile marker so users can orient the connector and the device more easily. I imagine the USB-IF could do this while retaining backwards compatibility. I suspect it could be achieved simply by mandating a small raised dot or ridge on the plastic as well as a corresponding mark on the device near the connector. For clients with this complaint, I have taken to gouging their devices and chargers or using tactile paint. Did the same for myself.

It is even smaller. With devices packing in more and more, the connector is one way to save. And they probably thought it was better to have fewer choices.

Not the answer you're looking for? Browse other questions tagged usb connector standard or ask your own question.

7
Why aren't PCB mounted male mini USB connector parts common?
2
Potentiometer's sign of net charge
-5
How to design a hardware standard
2
Should you plug your device in more frequently and wear out the MicroUSB port, or let the Li-Ion battery drain more and wear out the cells?
-2
How come portable phone chargers tend to use USBA?
0
How to choose which usb connector type is best for Processor working as a device mode?