Why are there only PID controllers, no PIIIDDD (higher order) controllers?

If so, are they common? Why do people usually just use a PID controller?

Someone asked me why I asked this question. It is because of this post actually: https://robotics.stackexchange.com/questions/7853/how-to-tune-pid-for-a-yt-kxt-system

Please correct me if I made any mistake.

PID is widely used because it's simple and easily tuned. Explanation for each parameter and their influence are somewhat intuitive. They are ubiquitous in industry making it a preferable solution - any designer¹ will preferably chose a solution that factory floor (on field) technicians can tune.

Is it all you can do with classical control? Of course not. For example, if you expect a ramp perturbation in your system, the only way for your control reject it with 0 error on steady state is to have a double integrator on your controller.

This is part of a more general rule/principle on classical control - for any signal you want to reject, it has to be part of the controller ( 1/s^2 is a ramp signal, which is also a double integrator transfer function)

And with that we are presented with a design choice, the engineering perspective: Can you accept the errors of a simpler controller², or do you cope with that difficulty² of forging a working and stable controller that is not easily tuned?

¹ if possible of course ² which may not exist

I'm going to take a partial stab at this. Say you integrated the integral of the error signal, what would you get? One integration will shift a low frequency sine wave by 90 degrees and another integration will shift it by another 90 degrees (to 180 degrees) and make it partially cancel the effects of the proportional part of the PID. This doesn't sound like a useful idea.

At higher frequencies, a single integrator might still produce a "useful" balancing signal but a doubly integrated high frequency will be much lower in amplitude and render it less useful.

Someone setting up a PID controller can "have their hands full" adjusting only three variables; having another adjustment (or two) to cope with might just be impractical.

I believe it has more to do with the ability to tune higher order controllers. The second order system (SOS) is the go to for control theory, examples, and models for good reason. It is sufficiently complicated to show the issues at work, and sufficiently simple to get your mind around. There are 3 parameters to tune, and they become somewhat intuitive after you have done it for a while. I have seen technicians with no understanding of phase margin or bode plots expertly tune PID controllers.

When you get to higher order plants, it is beyond (at least my) capacity to determine how changing one coefficient will change the closed loop response. In this case, I always do some form of state feedback and pick my poles wherever I want them.

In short, the number of coefficients goes up quickly and becomes very complicated for model orders higher than 2. Most people either do a Model Order Reduction, or choose some other form of feedback control.

In a PID, the proportional constant deals with \$y_r-y\$ (position errors), where \$y\$ is the measured state and \$y_r\$ is the wanted state, the D-constant applies to \$\dot{y}_r-\dot{y}\$ (velocity errors) and the I-constant with \$\int_{t_0}^{t} (y_r - y) dt\$ (cumulative position errors). Now, adding the D-term can make the overall system unstable, so one have to be careful. You could easily add an acceleration error term [\$A\times(\ddot{y}_r - \ddot{y})\$], but again, you would have to be careful. Notice, that this corresponds to saying that the acceleration of the error signal should have a say in the control of the system.

The usefulness of using the cumulative error of the cumulative position error is rather questionable, but I suppose it could also be of use in some rare cases.

Now we can't change the model (M) of the "system", but we can change the controller (C). The "trick" is to find a polynomial \$C(s)\$ such that the above fraction behaves in a nice stable manner while still responding quick enough to changes in the reference signal.

How you would realistically implement a higher order than a PID? A PID is already an improper transfert function, it is possible to implement it if you filter your command, but with a higher order you will need to filter twice your command? Resulting in a slower dynamic and a worst loop than an actual PID

The immediate problem is that there are no guidelines for tuning the additional parameters.

However PID is the basic structure. What you have are 5 PID blocks - one full PID, two pure integrators, and two pure differentiators. 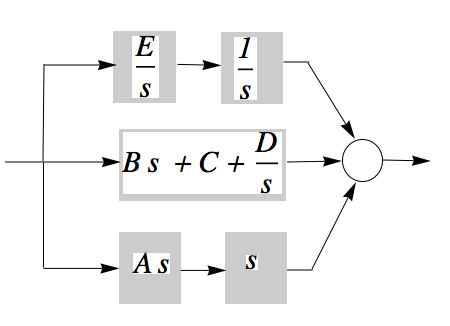 It is the purpose of a controller to IMPROVE the behaviour of a system with feedback in the time domain. I am afraid, a controller as proposed with the question will do the opposite: It will drastically reduce the stability properties of the system (increased phase shift of the loop gain function).

Although a method of direct synthesis may lead to PID as the solution for a feedback controller, in general it does not. PID as mentioned by others is a simple cookbook approach that may or may not provide the control performance you require regardless of how much time and effort you spend 'tuning' the P, I and D parameters.

For control problems that cannot provide the required performance using a PID controller there is a vast choice of control methods that can be used to synthesize a control law, and considering only controllers represented in the form of rational polynomial transfer functions you may indeed effectively have the PPPIIIDD control law you say is never considered if such a controller meets your requirements and factors into such a form.

But from what I've most often observed in industry if PID fails to meet requirements,and where the staff are not formally educated in control systems design, the PID may be used as a core element with additional elements synthesized in an ad-hoc manner and not necessarily with any regards to modeling and analysis of the problem. Sometimes they get lucky and it works. But most the time not.

17
How to use measured step response to tune control system
2
Is impulse response always differentiation of unit step response of a system?
8
How to design controllers “properly”?
3
Is a Type 2a PID(ish) controller just an example of an augmenting integrator?
7
Misconceptions about PID Controllers
0
Simulink Modeling Problem
2
How to infer equivalent PID controller coefficients from an existing black box ccontroller?
4
How to implement an analog PI controller using op amps
5
How does the second order time constant affect circuit behavior?