I'm trying to better understand the layout below. Which is based on a project called "Kraakdoos" [2] which is a touch based musical instrument. And sources suggest that it uses "‘malformed’ oscillators that were very unstable and highly sensitive for finger connections".

However from what I can tell of the circuit there are no explicit oscillators. Is this correct? It simply seems to be a high gain opamp (inverting configuration?). So my question is where does the oscillation come from?

Also am I correct in understanding that the transistors at the output are a push-pull output stage?

The circuit is our course in some respects intensionally wacky, but I'd like to understand it a little better. 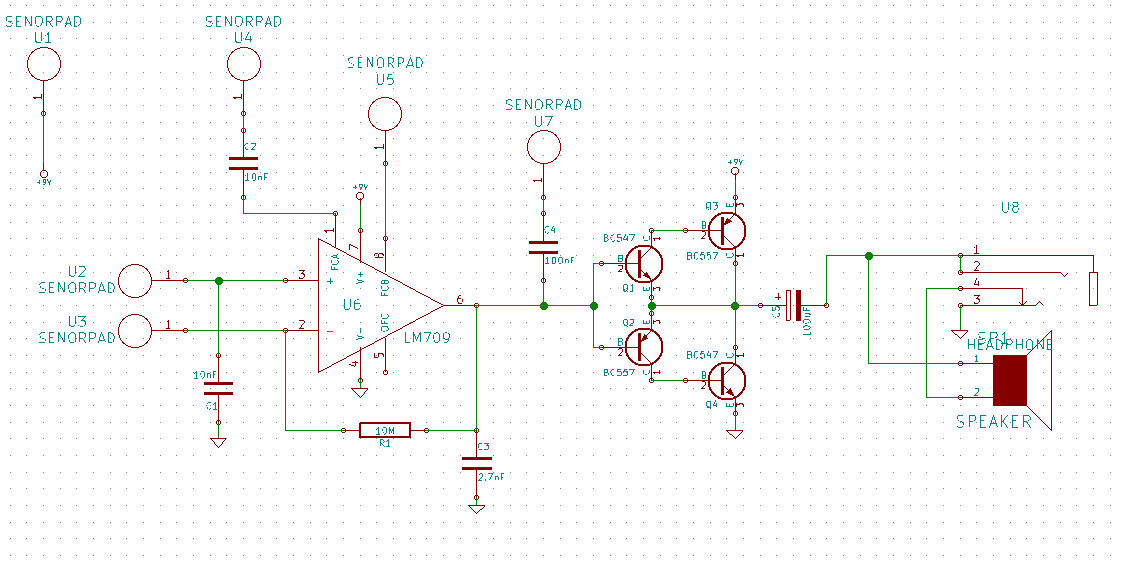 It's nominally a noninverting opamp configuration with unity gain, although with a 10M feedback resistor, the feedback is not going to be very effective because of the opamp input's bias current and capacitance.

So yes, the opamp is running essentially open-loop with a feedback path that introduces enough phase shift — along with the phase shifts introduced by touching the various pads — to allow it to oscillate at various frequencies.

The output stage is a push-pull configuration using a complementary Darlington configuration on the top and bottom. However, it isn't biased to eliminate crossover distortion, so it will have a "dead band" in its transfer curve. This probably serves as a gating function that prevents low-level "background" signals from getting through to the output.

At first glance, this circuit looks like a power amplifier, although there are some problems with the details.

I haven't looked up what exactly all those extra pins do on the opamp, and what a "senorpad" is supposed to be, so I'm just ignoring those. Some issues:

Not the answer you're looking for? Browse other questions tagged operational-amplifier inverting-amplifier push-pull or ask your own question.

3
How does this single supply opamp circuit work, and what does the output look like?
0
OpAmp performance for Sallen-Key filter
1
BJT vs OPAMP for RF signal amplification: BJT performs better, why?
1
How to account for input noise on a zero crossing detector op amp?
0
Understanding OpAmps in TINA simulation
1
gain of opamp circuit with current output
3
What is this opamp configuration?
0
Resistor values for OpAmp circuit with dc offset applied to inverting pin
0
Inverting Charge Pump with Push/Pull Stage
1
Discrete opamp design - unsure about real parts vs. simulation