Does a 24V inverter consume the same amount of wattage as a 12V inverter?

Let me clarify. I know how series and parallel setups work. I know that in series the voltage adds but the current stays the same. In parallel current adds but voltage doesn't.

But that doesn't really answer my question about the energy consumption of a given setup.

Let's use an inverter setup as an example.

And we have two different inverter setups:

If the LED bulb is consuming the same amount of power in both setups, what happens in the second example?

Does the current draw per battery get divided in half?

I think my misunderstanding comes from the fact that I don't know how electricity storage works with batteries. Elsewhere I've read that I shouldn't think of it in terms of watts but in terms of Ah storage. However, that goes against my way of thinking that \$volts \times amps = watts\$.

Say we have the same set up as above, will the available watts in the second example be more than then first?

I'll give you an answer covering a bit of general principles, since the specific outcome will have some dependence on the specific type of inverter.

That means that if the same inverter is capable of working with different values of input voltage, it will draw more current when it is connected to a lower voltage battery pack. The value of the capacity of the battery (ampere-hours) here is not relevant. The only thing that matters is that the same current will go through both batteries when they are connected in series.

So we have two cases:

The current in the two cases will be:

So the capacity of the battery doesn't come into play here. It comes into play, of course, to calculate how many hours of service those batteries would deliver. In fact the capacity \$C\$ of a battery is a rough estimation of how much time the battery can deliver a given current (don't mistake C for the capacitance of a capacitor, though! They're not the same thing at all, despite the confusingly identical symbol!). Mathematically:

This is a rough estimation, since the capacity of a battery is not an exceptionally precise parameter when it comes to evaluate the service time. To be precise you need what are called the discharge curves of the battery (batteries, surprisingly, are not linear devices), as you can see in this datasheet for a lead acid battery: 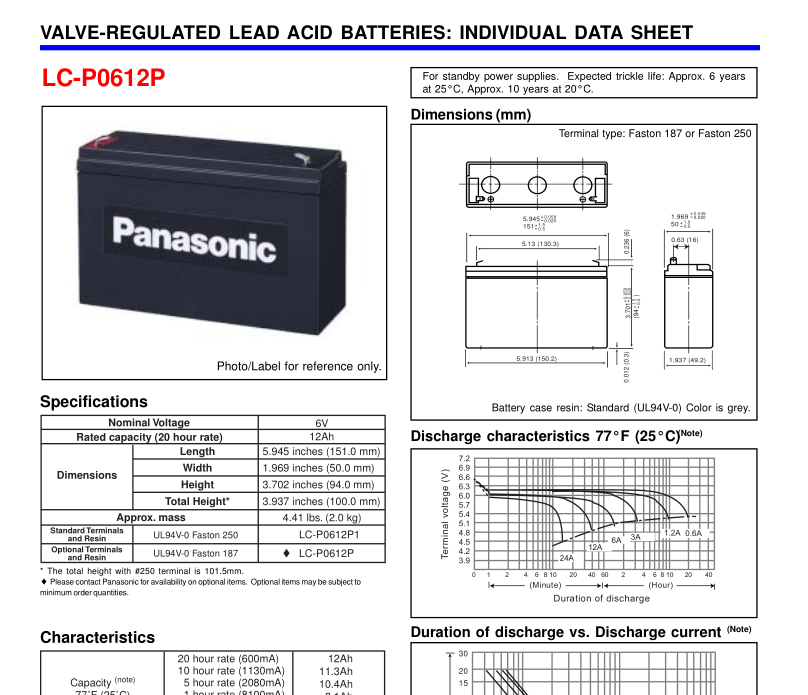 Here is a zoomed pic of the curves: 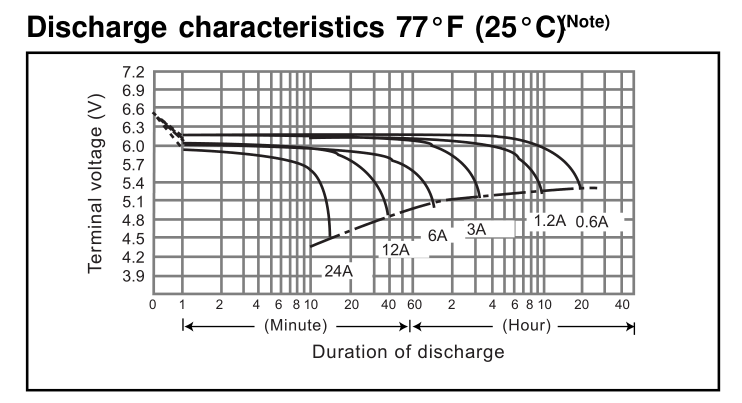 BTW, the energy in the battery is neither measured in ampere-hours (Ah) nor in watts (W), but the correct unit is the watt-hour (Wh), which is an alternative unit to the joule (J), which is the standard unit for energy. The conversion is simple:

The watt-hour is a more convenient unit when talking about devices that operate for long times and end up drawing large quantity of energy (not necessarily high power levels).

The watt (W) is the unit of power, instead, i.e. the rate of conversion of energy. \$1W = 1 J/s\$ Something drawing 1W from a source means that the device is converting/transferring/utilizing 1 joule of energy per second, i.e. for each second it is working a joule of energy is drawn from the source of power it is connected to.

The capacity of a battery C is a rough estimation of the energy stored in the battery. I cannot say why the industry introduced this strange unit, since you could well give the energy stored in the battery as a figure in watt-hours (and the manufacturers often do that on their technical datasheets). I can only guess that, since a battery is a roughly constant voltage source you can (very roughly) say that the capacity is proportional to the energy stored inside it, so it is easier to talk about ampere-hours, since amperes are more easily measured with common instruments, such as digital multimeters (which ordinarily cannot measure power directly).

If you have an inverter it generally means it converts DC to AC so I'm assuming you means a buck regulator or flyback regulator - these are highly efficient energy convertors and if the load wattage is 10 watts then the power taken by the input of the converter is 10 watts plus maybe 1 or 2 watts in losses.

If the voltage were increased to 24V (assuming the losses were 2 watts and the converter can handle 24 V), the input current to the converter will be: -

If the 24V battery is made up from 2 12V batteries in series it makes no difference whatsoever.

Not the answer you're looking for? Browse other questions tagged batteries inverter watts or ask your own question.

1
How to calculate battery capacity required for home applications?
1
Does converting 12V DC to 110V AC really increase the available watts?
1
24v vs 48v solar inverter
1
Two batteries in parallel: why they deliver “twice the current for the same time”?
1
Is it ok to use a car battery to power an inverter?
0
Lowest energy use, 240v or 12v
0
Possible to measure output of each battery in a battery bank?