Will two op-amps connected to the same input affect each other?

I've been given the following circuit to build for an education lab. The values of the resistors aren't accurate; they're only to illustrate that the gains of the two op-amps are different.

The aim is to have two separate op-amps of different gains connected to the same input signals, and then a SPDT switch connects the required output to \$V_{out}\$. The two op-amps will be in the same chip (LM353).

Since the output of AMP1 is fed back, and in some sense is connected to Node2, will the first op-amp effect the gain of the second op-amp and vice-versa? Or will the two op-amps behave as if they are separate and just happen to have the same input signals? 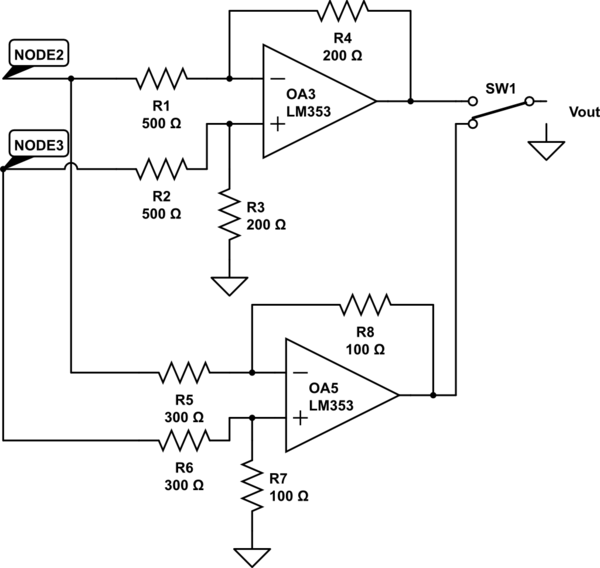 EDIT: Thank you for the replies. The input will be provided from a MPX2100 thin film pressure sensor which the datasheet indicates should have an output impedance of 1400-3000\$\Omega\$. Is this too large?

If so, perhaps it would be smarter to switch the inputs, or use a buffer op-amp like an instrumentation amplifier? The problem is the PCBs for the circuit were made long ago, and I'm now trying to reverse engineer the circuit from effectively no documentation. So making changes is difficult.

To ensure the two circuits have the correct intended gain, a strong voltage source should feed node 1 and node 2. In other words the output impedance of the voltage source has to be very low or the amplifiers will not have the gain as expected.

Because of this, it's reasonable to say that any loading (due to adding the number of amplifiers in parallel) will have negligible effects.

If the voltage source is not considerably low in its impedance then neither op-amp circuit will work with the gain they are expected to deliver.

Regarding the effect of a feedback resistor, are you aware of what a "virtual" earth means and the spin-off it has on differential amplifiers?

The feedback resistors you are using are very low in value, especially for the LM353, which is only reliably capable of a few mA output current. Maybe okay if your signal levels remain quite small.

As Andy said, at DC I'm expecting negligible effects if the driving source impedances are low (as you'd expect from the output of another op-amp with suitable drive capability).

I'm guessing you might see some distortion effects with AC signals, especially if you drive one of the op-amps into saturation or (more likely) current limit because the output impedance of the driving source will not be ~0 at higher frequencies. Just a guess though.

3
How to deal with the opamp input offset in a circuit with multiple opamps with inputs connected together?

18
Op-Amp Input Resistor?
1
Isolating two op amp amplifiers from each other
0
What difference will it make on the output between these two circuits?
1
A bit of help understanding an IC
0
Calculating gain of an overall system. Analogue electronics
6
If there exists a cascade of op amps, does the previous op amp's slew rate affect the later op amp's slew rates?
0
Why are my op-amp (LMC6484) output signals not independent of each other?
0
three points (two slopes) op amp conditioning circuit
3
How closely do the input buffer op-amps need to be matched on discrete instrumentation amplifiers?
2
How to feed reference voltage for two op amps inputs with different input signal each one